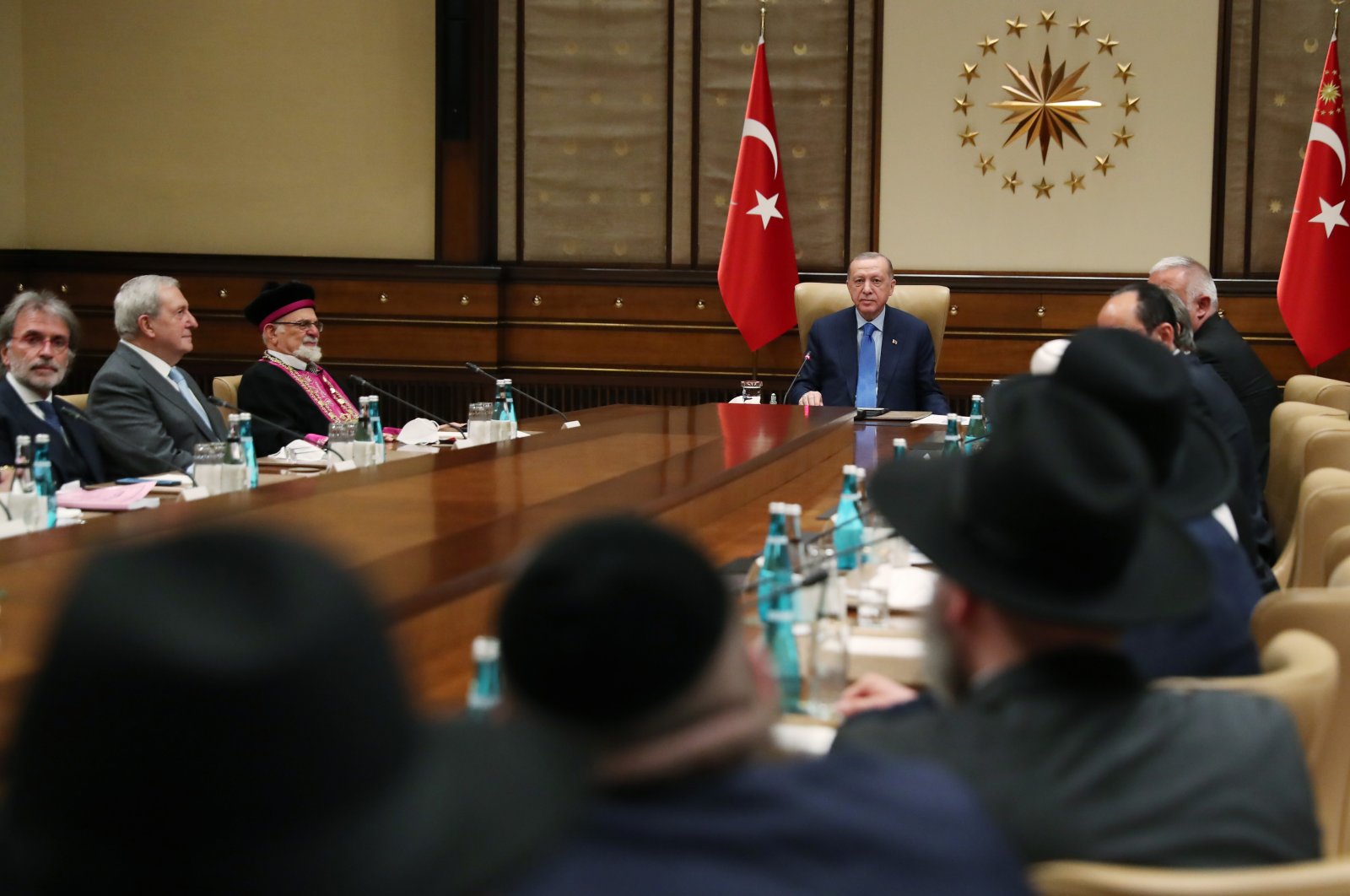 President Recep Tayyip Erdoğan is seen during a meeting with representatives from the Jewish community at the Presidential Complex in Ankara, Turkey, Dec. 22, 2021. (AA Photo)
by Daily Sabah with Agencies Dec 22, 2021 10:52 pm
RECOMMENDED

President Recep Tayyip Erdoğan late Wednesday drew attention to the thawing ties between Turkey and Israel during a meeting with representatives from the Jewish diaspora.

Erdoğan received members of the Jewish community in Turkey and the Alliance of Rabbis in the Islamic States (ARIS) at the Presidential Complex in the capital, Ankara. The Chief Rabbi of Turkey, Ishak Haleva, the Chief Rabbi of Russia, Berel Lazar, and other leading rabbinic authorities were among the participants.

Highlighting the importance of boosting the environment of peace and stability in the Middle East, Erdoğan said: "Turkey's greatest desire is a Middle East where societies from different religions, languages and ethnicities live together in peace."

Turkey's warnings to the Israeli government are to ensure that matters are approached via the perspective of long-term peace and stability in the Middle East, he added.

Meanwhile, touching on Turkish-Israeli ties, Erdoğan said that despite the differences of opinion on Palestine, "relations with Israel in the fields of economy, trade and tourism are progressing in their own way."

"Israel's sincere and constructive attitude in the context of peace efforts will undoubtedly contribute to the normalization process. Turkey-Israel relations are vital for the stability and security of our region," he added.

"The steps to be taken on the Palestinian issue, especially in Jerusalem, will contribute to the security and stability of not only the Palestinians but also Israel. In this regard, I attach great importance to our renewed dialogue with both Israeli President Isaac Herzog and Prime Minister Naftali Bennett."

VIDEO — President Erdoğan receives delegation of members from Turkish Jewish community, Alliance of Rabbis in Islamic States and Chief Rabbi Lazar of Russia who gift him a Hanukkah menorahpic.twitter.com/SijDLIApI1

Reminding that Turkey was the co-host of the International Holocaust Remembrance Day resolution adopted by the United Nations General Assembly in 2005 and co-presenter of the 2007 decision on the undeniability of the Holocaust, Erdoğan said: "I do not accept any approach that marginalizes people because of their faith or ethnic origin."

Additionally, "Turkish lands have also been a haven of peace for Jews who have been persecuted in different parts of the world throughout history," he said, adding Turkey embraced the Jews who fled the Inquisition in 1492.

Praising the contributions of Jewish citizens to the development, strengthening and achievement of the country's goals for centuries, he said: "We did not allow inhuman ideas such as racism, anti-Semitism, intolerance to other religions to find ground in these lands."

Also, "we need to be in solidarity in the fight against Islamophobia, anti-Semitism and xenophobia, especially in Western countries," he added.

In a tweet, Turkey's Jewish community also thanked the president for his efforts to improve ties with the faithful.

"We thank our President Recep Tayyip Erdoğan for accepting us and encouraging the Chachamim (an honorific title given to one well versed in Jewish law) of the Islamic states for a mutual future," the community said in a tweet on its official account. The representatives also gifted Erdoğan a Hanukkah menorah.

In late November, Erdoğan highlighted the importance of the fight against discrimination as he extended greetings to Turkey’s Jewish community in a statement issued to mark Hanukkah.

“We are taking all steps to ensure that we fulfill our historical responsibility to stand up against all types of discrimination, at a time when intolerance against different beliefs and identities are increasing across the world,” Erdoğan said.

Noting that Turkey has been home to many different cultures for thousands of years, Erdoğan said his administration sees it as a responsibility to stand up against discrimination based on religion, ethnicity and race, and to ensure that all citizens live freely and securely.