Erdoğan receives representatives of Turkish, Muslim communities in US 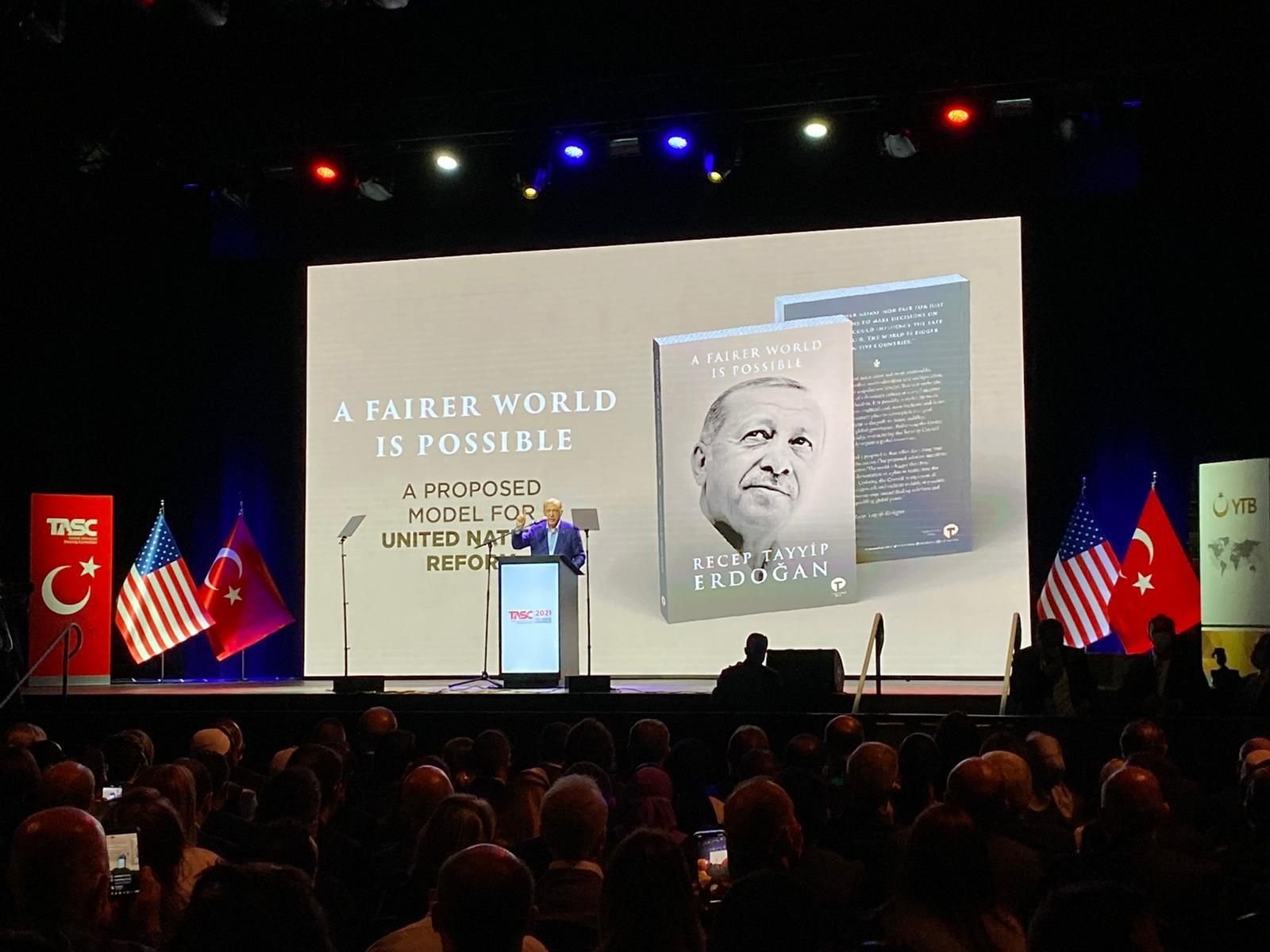 President Recep Tayyip Erdoğan on Monday met with Turkish citizens and representatives of the Muslim community in the United States during his visit to the country to attend the 76th United Nations General Assembly (UNGA).

The reception at the Manhattan Center was closed to the press and was organized in cooperation with the Presidency for Turks Abroad and Related Communities (YTB) and the Turkish American National Steering Committee (TASC).

Stating that they came together again this year in good health and well-being after a two-year obligatory break, Erdoğan said: "I am very happy to be among our brothers. I bring you the greetings of your relatives, friends and brothers from Turkey. We missed you very much, we see that our brothers in America missed us too."

Expressing that he is pleased with the aid campaigns organized by the American Islamic community by foundations and associations, Erdoğan said that both Turkish citizens and Muslims have carried out valuable works and that they have shown the beauty of being a Muslim to American society with their lives, stances and generosity.

Using the phrase "The achievements you have achieved in America make us and our nation proud as much as you do," Erdoğan said that he believes the number of successful businesspersons and scientists in the U.S. will increase even more.

"I hope that you will assume a greater role in the political field in parallel with the successes you have achieved in the commercial, scientific, social and cultural fields. In the coming period, I expect you to raise many more political representatives, both at the federal and state level. This is what suits this powerful community where the number of people of only Turkish descent exceeds 300,000," he added.

Emphasizing that the contributions of Turkish society to American society have had extremely positive reflections on Turkish-American relations, Erdoğan stated that he especially follows the efforts of NGOs established by Turkish citizens and compatriots living in the United States to promote Turkey, its culture and history to Americans.

Pointing out that the Turkish-American society has reached a certain level of maturity, Erdoğan said he believes Turkish society will make greater contributions to Turkey-U.S. relations by acting in unity and solidarity.

The U.S. launch of the book "A Fairer World Is Possible" written by Erdoğan was also held in New York.

The book, in which Erdoğan describes in detail Turkey's pursuit of justice for all humanity, was introduced at the event organized by the TASC at The Manhattan Center.

The book, which was translated into English and Arabic, was given as a gift to the guests attending the event.

Erdoğan on Sunday departed for New York to attend the 76th session of UNGA. During his visit to the United States, Erdoğan is expected to reiterate his message calling for global justice and hold bilateral contacts with world leaders. Among the most important issues on the president's agenda are U.N. reforms, the fight against irregular migration, global climate change, Islamophobia and sharing knowledge and experience to control the pandemic.

More than 130 heads of state and government, foreign ministers and delegates will attend the 76th U.N. summit, which will be held in New York this year and begins Tuesday, with some leaders sending video messages. Afghanistan, the COVID-19 pandemic and climate change will come to the fore at the General Assembly meetings, which will bring world leaders together in a hybrid format this year.

Addressing reporters in Istanbul ahead of his trip to the U.S., Erdoğan said: "I will emphasize Turkey's strong support for multilateralism and the goal of establishing a fairer world order."

Turkey has long championed a more representative U.N. Security Council – one bigger than its five current permanent members – using the slogan, "The world is bigger than five."

"I will share our views on key issues on the U.N.'s agenda. From the General Assembly podium, I will express our approach to the challenges that threaten all humanity," Erdoğan told reporters.

During his visit which will last until Sept. 22, Erdoğan will on Monday inaugurate the Turkish House (Türkevi), which is located in Manhattan, right across from the U.N. headquarters.

Turkish House was designed to reflect the Turkish culture and history, featuring a multiplicity of Turkish architectural motifs. It will also be a green-friendly building with "LEED Silver" certification.