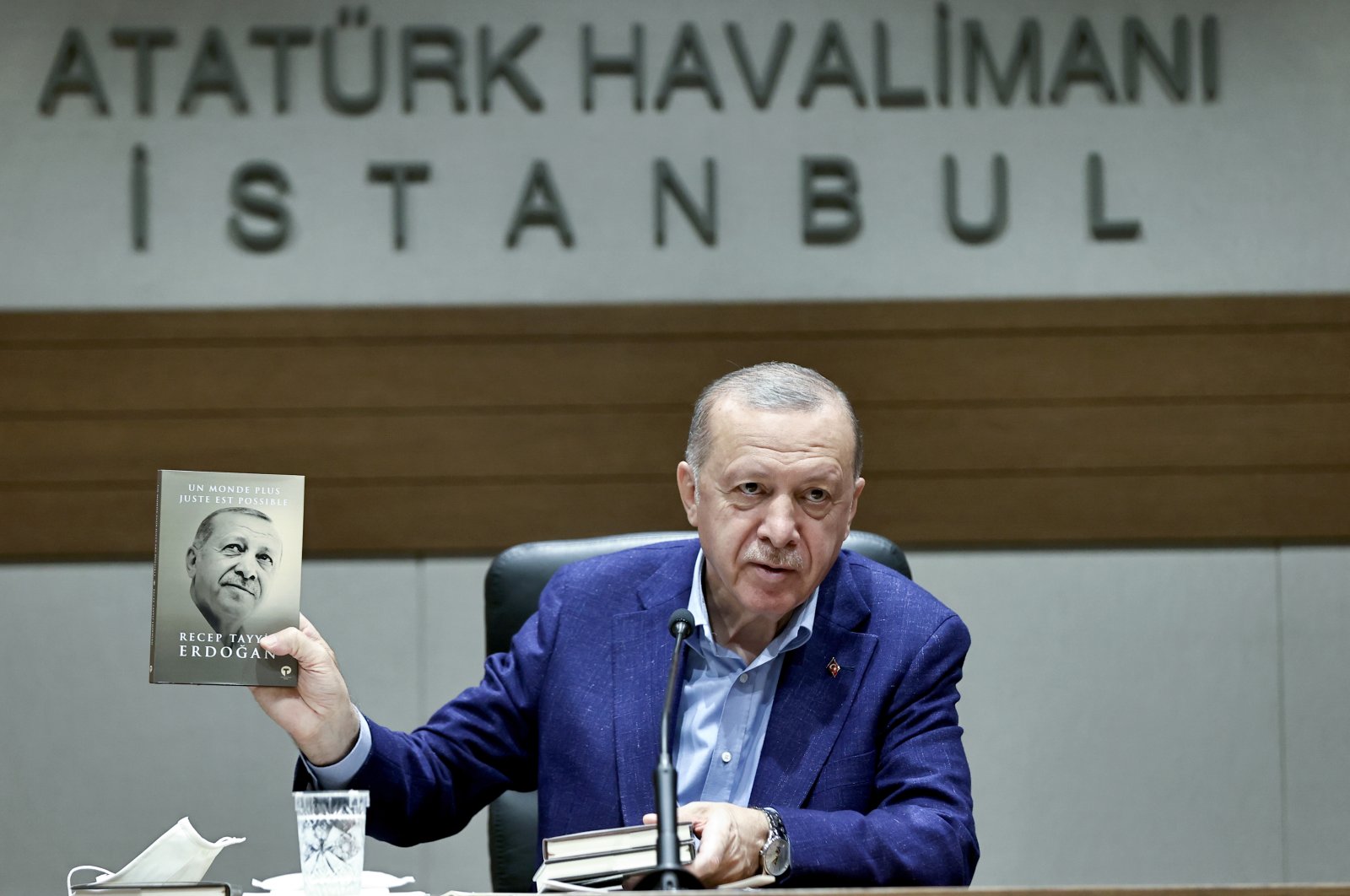 President Recep Tayyip Erdoğan on Sunday departed for New York to attend the 76th United Nations General Assembly (UNGA). During his visit to the United States, Erdoğan is expected to reiterate his message calling for global justice and hold bilateral contacts with world leaders. Among the most important issues on the president's agenda are U.N. reforms, the fight against irregular migration, global climate change, Islamophobia and sharing knowledge and experience to control the pandemic. Ahead of his trip to the U.S., Erdoğan once again called on the Western world to take more responsibility in solving the global migrant crisis.

More than 130 heads of state and government, foreign ministers and delegates will attend the 76th U.N. summit, which will be held in New York this year and begins Tuesday, with some leaders sending video messages. Afghanistan, the COVID-19 pandemic and climate change will come to the fore at the General Assembly meetings, which will bring world leaders together in a hybrid format this year.

Addressing reporters in Istanbul ahead of his trip to the U.S., Erdoğan said: "I will emphasize Turkey's strong support for multilateralism and the goal of establishing a fairer world order."

Turkey has long championed a more representative U.N. Security Council -one bigger than its five current permanent members- using the slogan, "The world is bigger than five."

"I will share our views on key issues on the U.N.'s agenda. From the General Assembly podium, I will express our approach to the challenges that threaten all humanity," Erdoğan told reporters.

Adding that that at the meeting Turkey will give "a message about migrants," he said: "Of course, we will have a message on the issue of migrants because we are the ones who bear the greatest burden of it."

He also called on Western countries to take more responsibility for the issue. Erdoğan also stated that he would meet with Greek Prime Minister Kyriakos Mitsotakis on the sidelines of the General Assembly in New York to discuss cooperation against the migrant crisis and other regional and bilateral issues.

The NATO members and regional rivals have been at odds over a host of maritime issues in the Eastern Mediterranean and migration.

Mitsotakis said on Friday that Turkey was an important partner in tackling any new migration challenge to Europe and needed support, adding that Europe itself has not delivered on a common policy in addressing the migrant issue.

"We need to see the steps to be taken from those around us. If we do not see it, we take the necessary decision and take the steps accordingly," Erdoğan said in response to Mitsotakis' remarks.

"Turkey is nobody's doorman on this," he added, echoing earlier comments that Turkey cannot be expected to take in a new wave of migrants.

Saying that the 2015 refugee crisis – when 1.3 million people traveled to Europe to request asylum – could have been instrumental in strengthening cooperation between Turkey and Greece, Erdoğan said Athens wasted this opportunity with its "uncompromising stance."

Concerns have risen over a possible spike in migrants from Afghanistan, due to the U.S.' pullout from the country and the following surge of Taliban attacks. Turkey has made it clear that it will not bear the burden of the migration crises experienced as a result of the decisions of third countries.

Turkey is not the only country putting up barriers. Its neighbor Greece has just completed a 40-kilometer (25-mile) fence and surveillance system to keep out migrants who still manage to enter Turkey and try to reach the EU.

Erdoğan is also expected to hold other bilateral meetings with important leaders, notably with French President Emmanuel Macron and British Prime Minister Boris Johnson. He will also hold talks with the leaders in a special format at the dinner to be given by the U.N. Secretary-General Antonio Guterres.

During his visit which will last until Sept. 22, Erdoğan will on Monday inaugurate the Turkish House (Türkevi), which is located in Manhattan, right across from the U.N. headquarters.

Turkish House was designed to reflect the Turkish culture and history, featuring and a multiplicity of Turkish architectural motifs. It will also be a green-friendly building with "LEED Silver" certification.

In addition, as part of the conference titled "A Fairer World Is Possible" to be organized by the Turkish-American National Steering Committee, Erdoğan will meet with representatives of Turkish and Muslim communities in the U.S.

It is expected that Erdoğan will give interviews to media outlets in the U.S. and attend the traditional dinner of the 11th Turkey Investment Conference to be organized by the Turkish-American Business Council (TAIK) with the participation of the representatives of the U.S. business world.

Erdoğan will also present his book "A Fairer World is Possible," translated into English, Arabic and French, to the leaders of the member states he will meet at the U.N. General Assembly.

The president's book, "A Fairer World Is Possible," carries an in-depth explanation of Turkey's search for justice for all humanity.

The book was published by the Istanbul-based publishing house Turkuvaz and translated into several languages, including English, Arabic, German, French, Russian and Spanish. Profits from the book will go to Turkey's Disaster and Emergency Management Authority (AFAD).

Pointing to the dilemmas of global politics, especially injustice, the refugee crisis, international terrorism and anti-Islam rhetoric in the book, Erdoğan reveals the discrimination and double standards in the world, providing the U.N. as an example.

In the book, the president draws attention to issues of legitimacy, functionality, effectiveness, inclusion, representation and governance within the U.N., underlining the need for comprehensive reform, especially in the U.N. Security Council (UNSC).

While the book also includes proposals for the restructuring of the U.N., it recommends the implementation of a perspective summed up in the phrase "The world is bigger than five" and focuses on changing the structure of the UNSC.

The book suggests that the council be reorganized in a way that represents the continents, beliefs, origins and cultures in the fairest way possible. It states that this will be a revolutionary step for the solution and establishment of global peace.

In this context, it proposes that the number of permanent members in the UNSC be increased to 20 from the current five.

It states that the election of 20 countries to the council from the General Assembly can serve as an alternative solution.