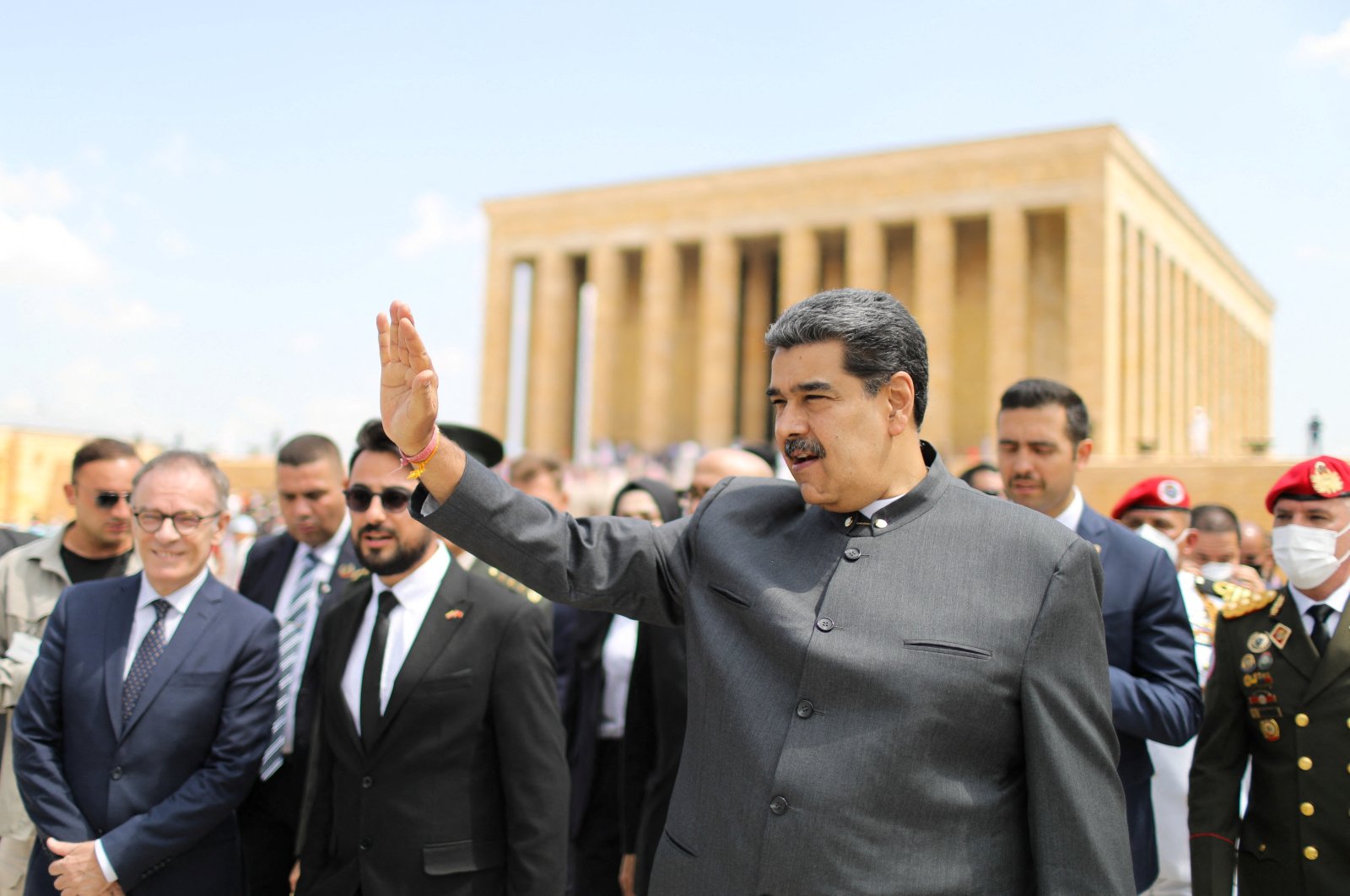 Venezuelan President Nicolas Maduro waves after a visit to Anıtkabir, the mausoleum of Mustafa Kemal Atatürk, founder of modern Turkey, as part of a two-day official visit, in Ankara, Turkey, June 8, 2022. (Reuters)
by Daily Sabah with Agencies Jun 07, 2022 5:13 pm
RECOMMENDED

“All aspects of Turkey-Venezuela relations will be reviewed and steps to enhance the relations will be discussed during the visit,” the Turkish government said in a statement posted on its English-language website ahead of the reception, adding the visit is at the invitation of President Erdoğan.

“The two leaders are expected to exchange views on regional and global matters as well,” it added. Maduro has repeatedly said he would visit Turkey, one of a handful of countries globally with whom he maintains ties amidst stiff sanctions by the United States.

The VTV state channel showed footage of Maduro arriving at the airport in Ankara, where he was received by senior officials of Turkey.

“I am delighted to start this international tour, in the lands of the sister Turkish nation,” Maduro wrote on Twitter.

“I appreciate the warm welcome and affection they have shown us. I am sure that we will consolidate the ties of union and cooperation between our peoples.”

Venezuela, Nicaragua and Cuba were not invited to a week-long Summit of the Americas, hosted by Washington. Mexico’s president skipped the event in protest at the exclusion of the three countries’ leaders.

Leaders of the so-called Northern Triangle of El Salvador, Guatemala and Honduras were also absent, even though illegal migration from the region is expected to be a key talking point.

Maduro arrived in Turkey hours after Foreign Minister Sergey Lavrov of Russia. Lavrov was in the country to discuss unblocking grain exports from Ukraine, stalled by Russia’s war on its neighbor.

Turkey is a friend of Venezuela, which sought to reinforce ties with countries such as China, Iran and Russia after the United States sanctions against the Maduro government. Turkey has since 2018 increased its exports to Venezuela, including food and personal hygiene products. The South American country has in turn sold gold to Turkey, though the amount is not public.

In April the two countries signed seven agreements during a visit to Venezuela by Turkish Foreign Minister Mevlüt Çavuşoğlu.

They offered no details on the deals on oil, gas, tourism, sports and other areas. Çavuşoğlu has said he wants trade between the two countries to reach $1.5 billion annually, up from some $850 million currently.