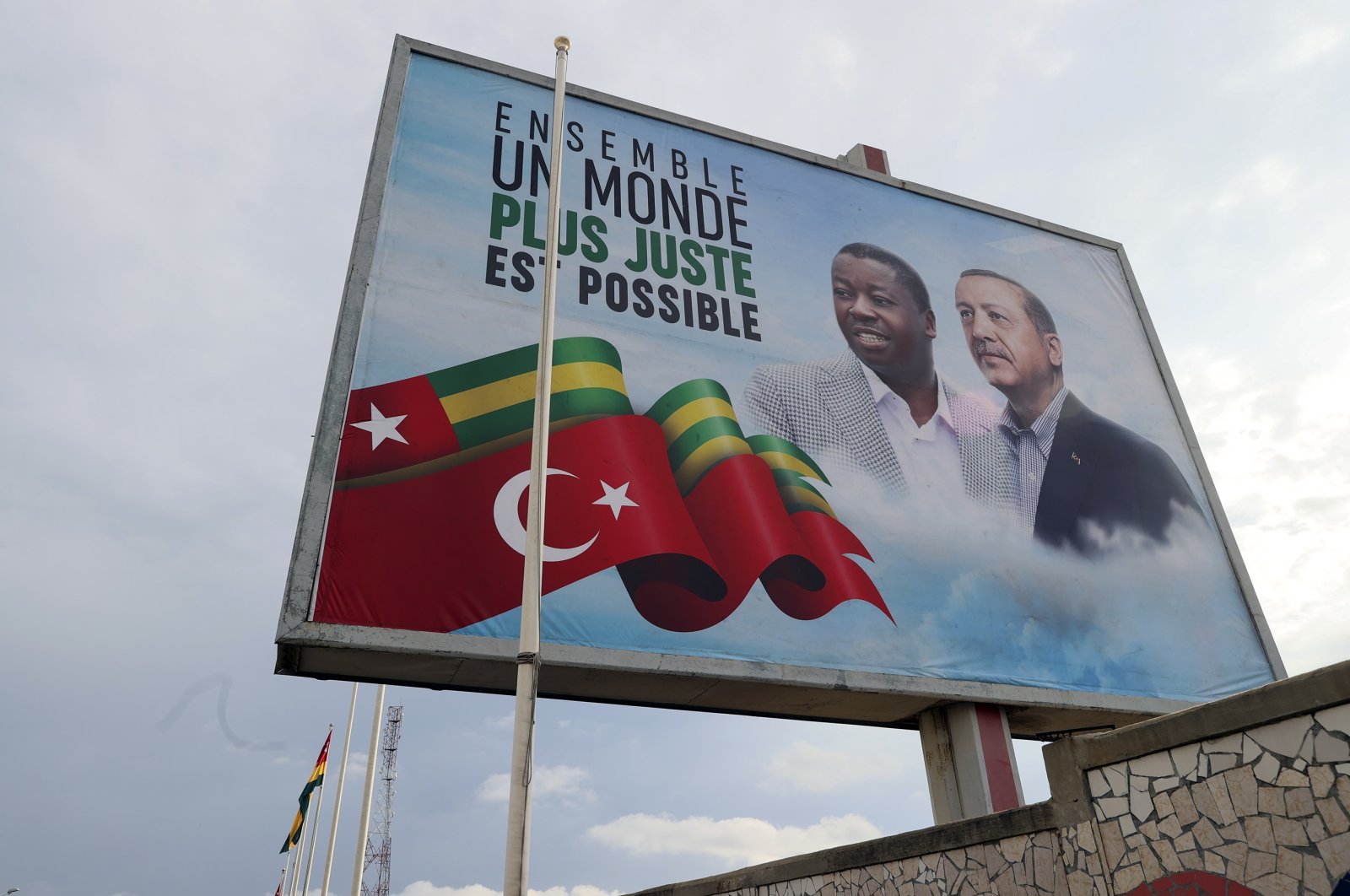 Posters of President Recep Tayyip Erdoğan and his Togolese counterpart Faure Gnassingbe with the words "Together a Fairer World is Possible" were seen in various parts of the capital Lome, Togo, Oct. 19, 2021. (AA Photo)
by DAILY SABAH Oct 19, 2021 1:03 pm
RECOMMENDED

President Recep Tayyip Erdoğan visited Togo on the second stop of his three-nation four-day diplomatic trip to Africa. Ahead of the visit, the Togolese people stated that a partner like Turkey would benefit Togo.

Turkish and Togolese flags lined the streets in Togo's capital Lome ahead of Erdoğan's official visit.

Posters of Erdoğan and his Togolese counterpart Faure Gnassingbe with the words "Together a Fairer World is Possible" were seen in various parts of the capital.

Erdoğan was welcomed by Gnassingbe at Gnassingbe Eyadema International Airport.

Prior to Turkey's first official visit at the presidential level to Togo, Anadolu Agency (AA) spoke with the Togolese people.

Cherafdine Tchadjobo, 27, who works as an assistant director, said he was aware of the visit thanks to the posters.

"I knew that Turkey opened an embassy in Lome. I am sure that the Turkish president's official visit will improve relations a lot. I believe that the two countries will be close friends with each other," he added.

Monique Adade, 24, an industrial engineer, said she had heard about Turkey often in recent years.

Noting that she was aware that ties between the two countries have improved, Adade said a partner like Turkey would benefit Togo.

"When I saw the posters, I became aware of the visit of the Turkish president. I am sure that this visit will create important opportunities for the two countries," she said.

Foreign Minister Mevlüt Çavuşoğlu's visit to Togo on July 20 last year was the first official visit from Ankara to Lome.

Turkey opened its embassy in Lome on April 1 this year.

Togo is President Erdoğan's second stop on his four-day African tour. He arrived in Angola, the first destination, on Sunday and Nigeria will be the final stop.

During his visit to Angola, Erdoğan on Monday underlined that Western countries for years exploited the continent of Africa for their own interests and reiterated his call for a fairer world, urging the oppressed to unite under this aim.

Then, addressing Angola's parliament, Erdoğan warned that the fate of humanity cannot and should not be left at the mercy of a handful of countries that won World War II.

"There are still those who cannot accept the independence, freedom and equality gains of the African peoples. We have been witnessing the recurrence of this indigestion recently," he said.

Erdoğan’s tour is seen as part of Turkey's policy to contribute to the economic and social development of the continent by encouraging peace and stability. The tour also serves as an opportunity to develop bilateral relations based on equal partnership and mutual benefit.

The president has officially visited 28 African countries to date and is now touring Angola, Nigeria and Togo. The trip was also Turkey's first official visit at the presidential level to Angola.