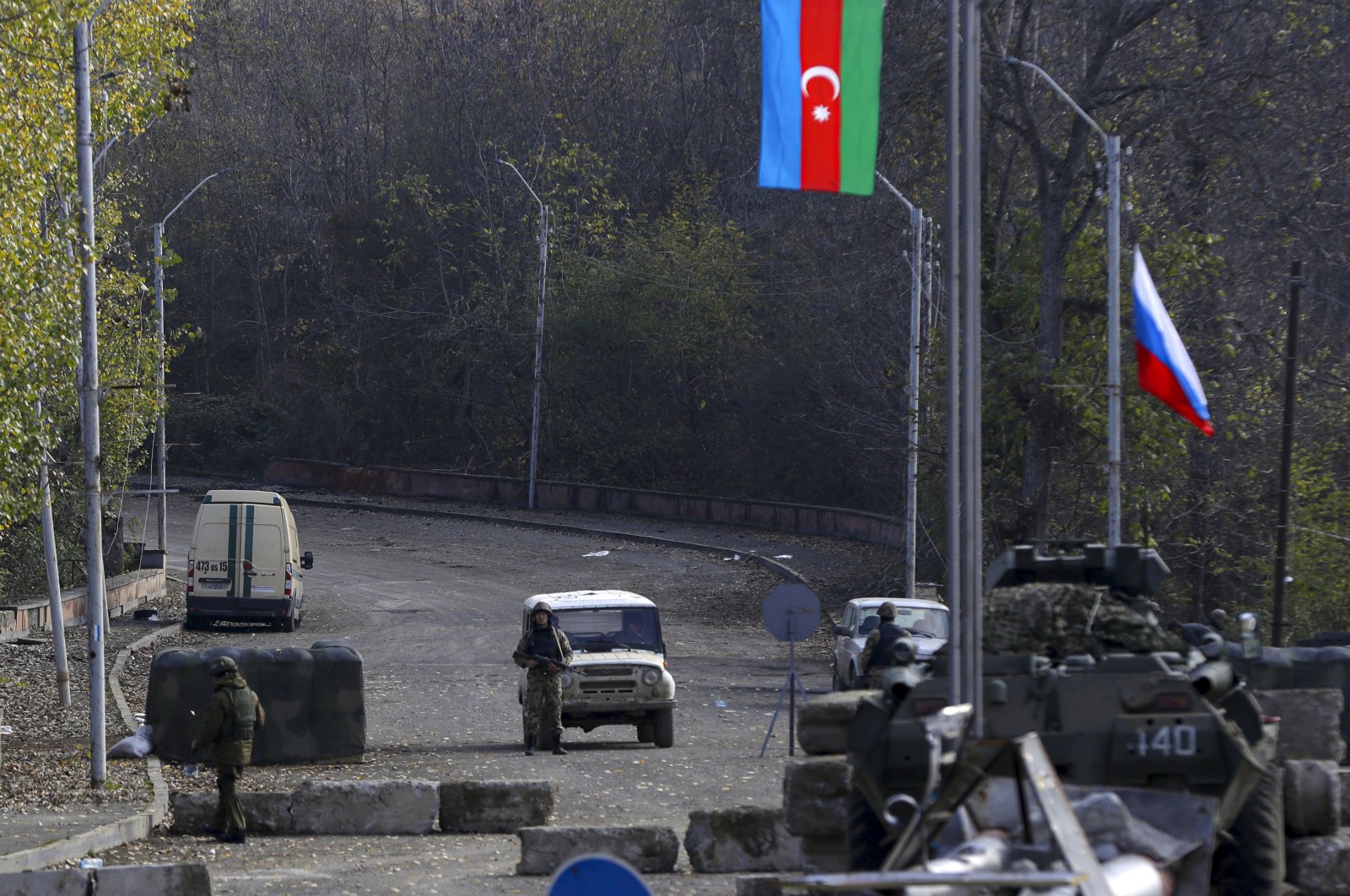 An Azerbaijani soldier (C) stands in front of an off-road car as Russian peacekeepers' military vehicles parked at a checkpoint on the road to Shusha in Nagorno-Karabakh, Nov. 17, 2020. (AP File Photo)
by DAILY SABAH Jun 14, 2021 12:16 pm
RECOMMENDED

Azerbaijani intellectuals are looking forward to President Recep Tayyip Erdoğan’s visit to Shusha, which was liberated from Armenian occupation, as they believe his visit will further strengthen Turkey-Azerbaijan relations and send the message that Azerbaijan is not alone in the Caucasus.

The editor-in-chief of the Yeni Müsavat daily Rauf Arifoğlu told Anadolu Agency (AA) that Erdoğan will be the first Turkish leader to visit Nagorno-Karabakh. Emphasizing the sociopolitical importance of the visit, Arifoğlu said Azerbaijan is eagerly awaiting it.

Meanwhile, the Deputy Director of the Caucasian Center for International Relations and Strategic Studies (QAFSAM) Nazım Cafersoy called Erdoğan’s visit “historic.” He noted that the visit will bring a new dimension to strategic relations between Turkey and Azerbaijan and deepen the psychological and societal dimension of relations.

Noting that analysts predict Erdoğan will discuss the Caucasus with U.S. President Joe Biden during his meeting on the sidelines of the NATO summit in Brussels Monday, Cafersoy said the Turkish president’s visit will reinforce the idea that Azerbaijan is not alone in the Caucasus and that Turkey stands beside it.

Erdoğan is expected to visit Shusha with Azerbaijani President Ilham Aliyev on June 15.

Erdoğan had announced his visit to Shusha back in March.

The Azerbaijani Armed Forces liberated Shusha in November after 28 years of Armenian occupation. Shusha, known as the pearl of Nagorno-Karabakh, was occupied by Armenia on May 8, 1992.

The town has significant military value since it is located on strategic high ground about 10 kilometers (6 miles) south of the region’s capital over Khankendi (Stepanakert) and on the road linking the city with Armenian territory. Besides its strategic significance, the town is known as a symbol of Azerbaijani history and culture with many historic sites, the restoration of which has started. Many prominent Azerbaijani musicians and scholars were born in the city.

Azerbaijan seized back swathes of its Armenian-occupied territory last year in a conflict that erupted in Nagorno-Karabakh. The conflict claimed 6,000 lives and ended with a Russian-brokered truce in November.

While the Karabakh truce has largely held, the border region has witnessed several skirmishes.