EU to support all initiatives for Kabul airport opening: Envoy 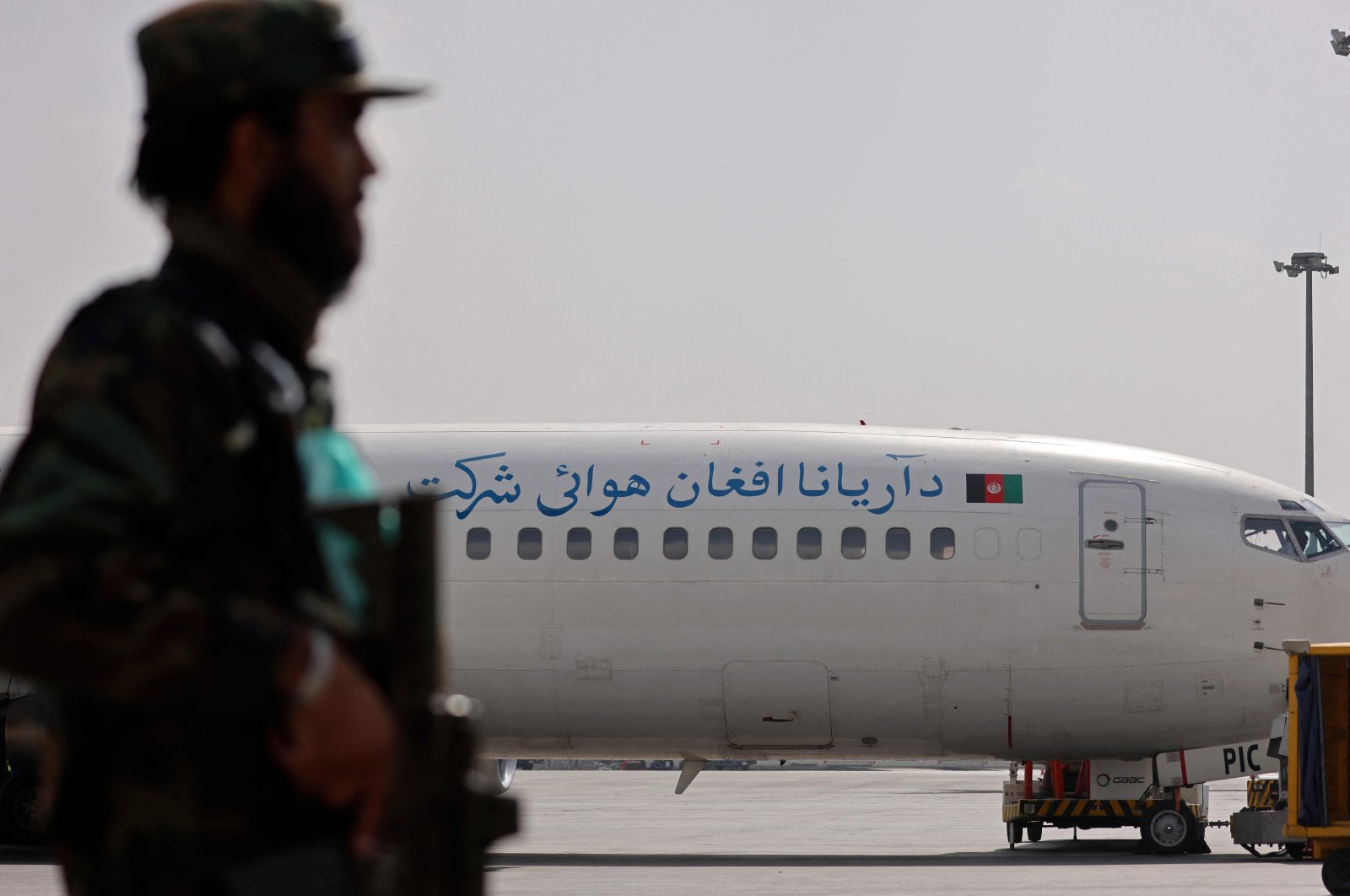 A Taliban fighter stands guard next to an Ariana Afghan Airlines aircraft on the tarmac at the airport in Kabul, Afghanistan, Sept. 12, 2021. (AFP Photo)
by Dilara Aslan Sep 13, 2021 1:13 pm

As Turkey continues to hold talks on how to proceed with the security and operations of Kabul airport with all parties, the EU highlights that it welcomes efforts to run the vital transport hub

The European Union will support all initiatives for Afghanistan’s Kabul Hamid Karzai International Airport to be opened, the bloc’s ambassador to Turkey, Nikolaus Meyer-Landrut, said, as Ankara has stepped up efforts to contribute to the functioning of the airport.

Speaking to Daily Sabah during a visit to western Izmir province, Meyer-Landrut underlined that the airport is “critical” for the country in many respects.

“Everything that allows the airport to be opened and allow this critical function to be exercised are of course welcomed,” he said.

“In this sense, the European Union of course welcomes the efforts Turkey is undertaking,” Meyer-Landrut highlighted.

Turkey has been holding talks with the Taliban in Kabul, where it still has a diplomatic presence, about the conditions under which it could help operate the Afghan capital's airport.

The Taliban recently declared the war in Afghanistan over after taking control of the presidential palace in Kabul, forcing Western nations to scramble to evacuate their citizens amid chaos at Kabul Hamid Karzai International Airport as frantic Afghans searched for a way out.

Apart from the Taliban, Turkey is also in talks with the U.S. and Qatar, which also offered assistance. Foreign Minister Mevlüt Çavuşoğlu said Turkey was working with Qatar and the U.S. on the terms under which the airport could reopen to regular flights needed to deliver humanitarian aid, evacuate stranded civilians and re-establish diplomatic missions in Kabul.

But he said security remained a key sticking point, stressing that commercial flights could never resume until airlines – and their insurers – felt that conditions were sufficiently safe.

"But inside, there could be a security company trusted by the international community or all other companies," he said.

"Even if airlines, including Turkish Airlines, are keen to fly there, insurance companies would not allow it."

President Recep Tayyip Erdoğan had also voiced doubt on leaving the airport’s security to the Taliban. He said Turkey was still assessing the group's offer, but the Taliban is still insisting on controlling security.

"Let's say you took over the security, but how would we explain to the world if another bloodbath takes place there?" Erdoğan said.

“I understand that these talks have not yet come to a conclusion. There are still issues, in particular security issues, which need to be addressed. These need to be addressed with those who are in power in Afghanistan,” Meyer-Landrut stated further.

Technical experts from Qatar and Turkey have begun repairs, though it’s not clear when the airport will be up and running.

The Taliban victory in Afghanistan has not led to a dramatic refugee exodus but the country urgently needs humanitarian aid to prevent economic collapse and major upheaval, according to the U.N.

The UNHCR said two weeks ago that up to half a million Afghans could leave their homeland by the end of the year in a worst-case scenario.

Being asked if there was any cooperation between Turkey and the EU on humanitarian assistance in the war-torn country, Meyer-Landrut said: “We have explained to the Turkish authorities that the European Union has announced that it will increase by four times its humanitarian assistance to Afghanistan by the end of the leave, bringing it to more than 200 billion euros ($236 billion).”

He said that the vector of this humanitarian assistance will be to the largest extent provided by U.N. organizations.

“We share the analysis of Foreign Minister Çavuşoğlu that it is now critical to bring assistance to the people of Afghanistan as quickly as possible,” he added.

Çavuşoğlu told a live broadcast on NTV recently that the best way to solve the Afghan migrant crisis is to solve the conflict domestically to ensure that people are not forced to leave their homes.