No decision yet on Taliban request to support Kabul airport: Erdoğan 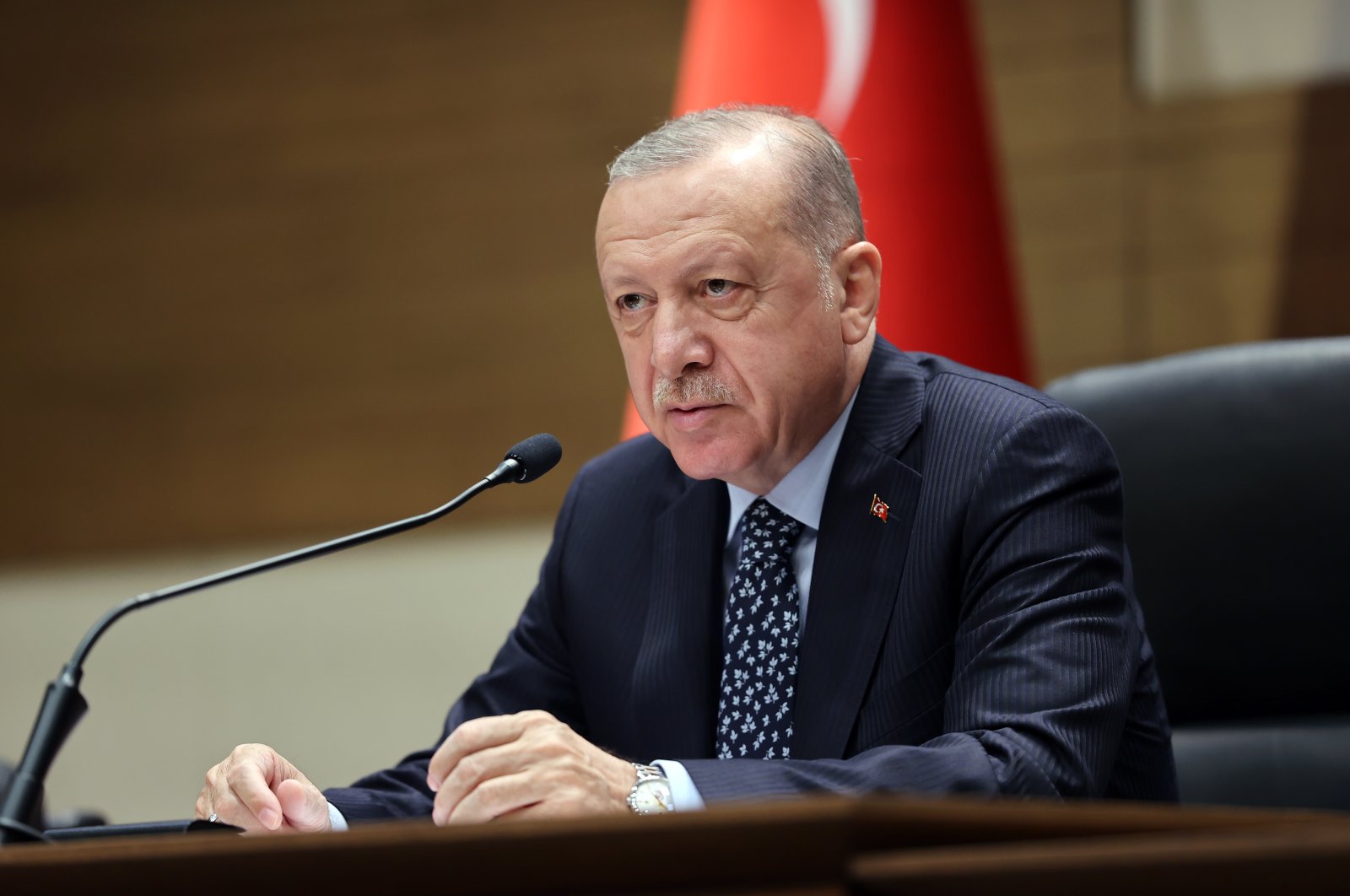 Turkey is still considering the Taliban's offer for Turkey to run the Afghan capital's airport, President Recep Tayyip Erdoğan said, as the security situation on the ground has been rapidly deteriorating with recent terrorist attacks and turmoil in the country

There has been no final decision yet on the Taliban's request for support to run Kabul Hamid Karzai International Airport due to security concerns and uncertainty in Afghanistan, President Recep Tayyip Erdoğan said Friday, following a Daesh attack at the airport that caused the death of dozens of people.

Speaking during a news conference in Istanbul before departing on an official visit to Bosnia-Herzegovina and Montenegro, Erdoğan said: "The Taliban have made a request regarding the operation of the Kabul airport. They say, 'We'll ensure security and you can operate it'. But we have not made a decision yet because there is always a possibility of death and such things there."

He added: “We will make a decision after the administration (in Afghanistan) is clear.”

Erdoğan said calm should be restored in Kabul before making a decision on the airport, adding there was a risk of getting "sucked in" to something that would be hard to explain given uncertainty around the possible mission.

The president also said that a 3 1/2-hour meeting was held with the Taliban in the Turkish Embassy in Kabul and "talks could be held again if needed."

On the talks with the Taliban, Erdoğan underlined that Turkey does not need to seek permission to hold talks with anyone.

Explaining that the Turkish Embassy was moved within the military unit at Kabul airport, Erdoğan said that the embassy there was working towards holding talks. "We aim to carry out such talks in a healthy manner."

Responding to domestic criticism over Turkey's engagement with the insurgent group, Erdoğan said Ankara did not have the "luxury" to stand idly by in the volatile region.

He also condemned the Daesh attack at Afghanistan's Kabul airport, saying that it demonstrates how dangerous the group is for the world and the region.

"The evacuation of Turkish military personnel serving in Afghanistan continues. We will complete the evacuations as soon as possible," he added.

There has been no damage to Turkish units at Kabul airport, the Defense Ministry announced late Thursday. The first plane carrying 345 Turkish military staff, including civilian personnel, landed in the capital Ankara at 11:45 a.m. local time (8:45 a.m. GMT) on Thursday. The ministry said that as many as 1,129 civilian Turkish citizens were evacuated via military aircraft.

Ankara has so far evacuated at least 350 soldiers and more than 1,400 people from Afghanistan since the Taliban takeover this month.

The Defense Ministry announced that Turkey had begun evacuating its armed forces from Afghanistan after evaluating the current situation and conditions, in a statement late Wednesday, referring to the Taliban’s takeover of the war-ridden country. However, Turkish experts could remain in the country to provide technical support to the Taliban in operating Kabul airport, officials said.

Since 2002, the Turkish Armed Forces (TSK) have operated in Afghanistan under the United Nations and NATO. Turkey had more than 500 noncombatant troops stationed in Afghanistan as part of NATO’s now-abandoned mission in the war-torn country.

Turkey has been in Afghanistan in a noncombat role for 20 years and has been involved in consultancy efforts, reconstruction and maintenance. It has been operating the airport for six years. It had been negotiating with both the Taliban and Washington about playing a role in protecting the airport after the U.S. troop withdrawal, which is scheduled to be completed soon.

But the Taliban’s swift capture of the Afghan capital has required Ankara to change its plans.

After the Taliban seized control of the country Turkey offered technical and security assistance at the airport. However, the Taliban said that the group would secure the airport itself.

Officials told Reuters this week that the Taliban had asked Turkey for technical help to run the airport but demanded that Ankara's military pull out by an Aug. 31 deadline.

“We want good relations with Turkey, the Turkish government and the Muslim people of the Turkish nation. As for Turkish forces stationed in Afghanistan, we are not in need of them in our country and once the evacuation is completed we will secure the airport by ourselves,” Mujahid said.

The Taliban recently declared the war in Afghanistan over after taking control of the presidential palace in Kabul, while Western nations scrambled Monday to evacuate their citizens amid chaos at Kabul airport as frantic Afghans searched for a way out. It took the Taliban just over a week to seize control of the country after a lightning sweep that ended in Kabul as government forces, trained for two decades and equipped by the U.S. and others at a cost of billions of dollars, melted away.

The president also touched on concerns over a possible spike in migration after the crisis in Afghanistan.

"The current number of migrants from Afghanistan, recorded and unrecorded, according to our Interior Ministry, is 300,000," Erdoğan said. "We are highly sensitive to the issue of migration. We are constructing a long wall covering almost all of the border from Iran to Iraq and Syria."

Concerns have risen over a possible spike in migrants from Afghanistan due to the U.S. pullout from the country after two decades.

Erdoğan had urged European countries to take responsibility for any new influx, warning that Turkey had no intention of becoming “Europe’s migrant storage unit.”