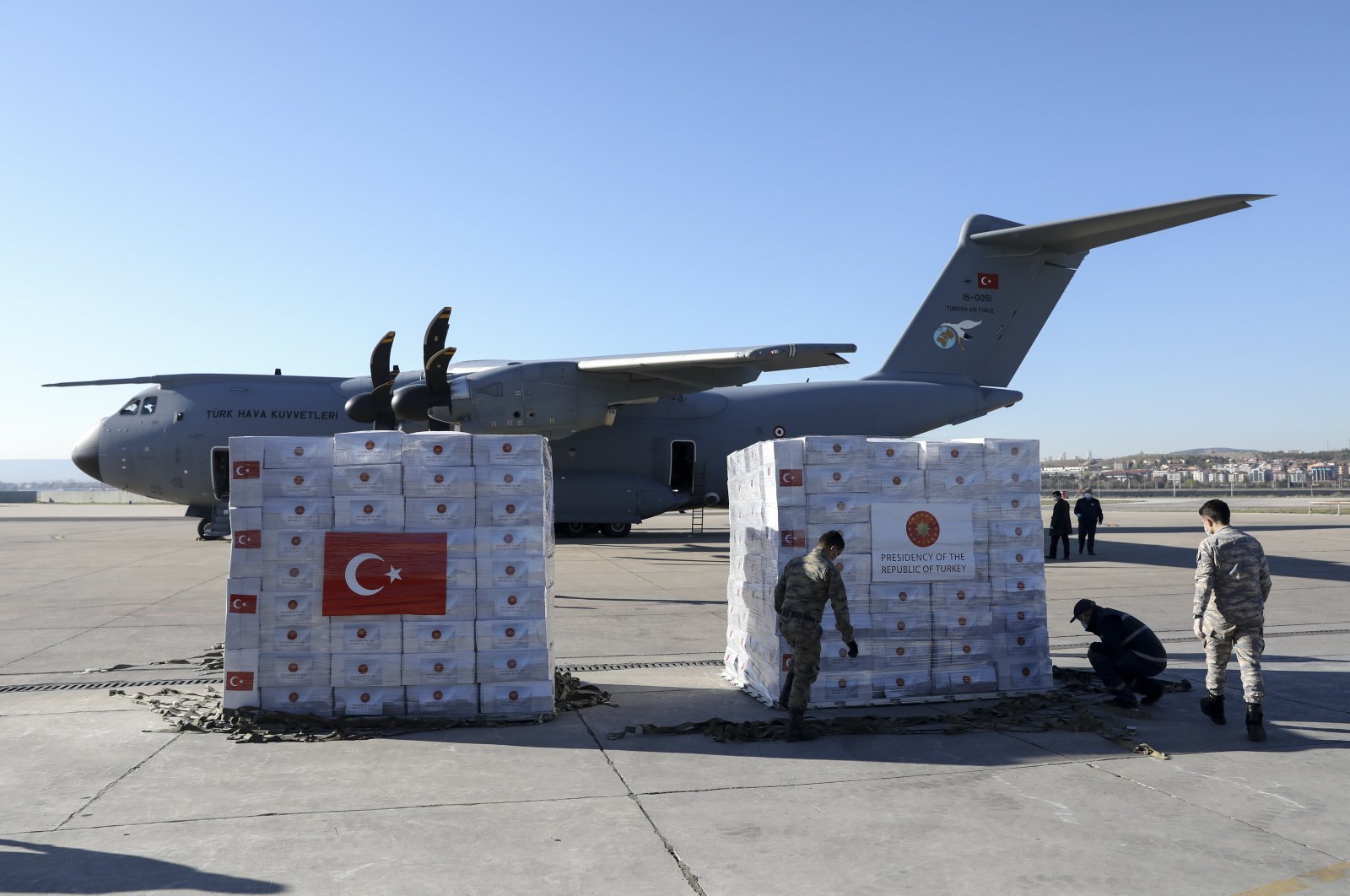 Turkey sent more than one cargo plane carrying medical aid equipment to the U.K. over the past month.
by DAILY SABAH May 08, 2020 12:38 pm

Officials from both Turkey and the U.K. have reacted against the Western media's twisted coverage of Turkish medical aid to the virus-hit country, revealing that the truth proves Ankara's mettle despite efforts to portray it otherwise

Western media's bias against Turkey revealed itself even during the pandemic as repeated reports attempted to discredit Turkey's medical aid to the United Kingdom over the past week, only to be falsified in the end with facts and official remarks from both Ankara and London, denying the claims.

Turkish officials underlined that the government was not involved in any stage of the production of the 400,000 personal protective equipment (PPE) items that Britain rejected for reportedly not meeting safety standards.

Turkey's Presidential Communications Director Fahrettin Altun has criticized the media outlets that have embraced and published false news stories claiming that the PPE purchased by the U.K. from Turkey was "useless," without confirming details of the story.

He said on Twitter that the mentality of those who relied on the anti-Turkey news without determining its accuracy and reliability highlighted the importance of independent, impartial, credible and responsible media.

Altun said that both the U.K. and Turkish officials rejected the baseless allegations and revealed the truth.

If the media stops chasing the truth by being drawn into a vortex of lies, superstition and sensation, there could be no defense of democracy, he added.

Two weeks ago, the British government made an announcement that 400,000 overalls would be delivered from Turkey. However, the delivery had been delayed for days due to reasons originating from the private supplier. The delivery only became possible when the Turkish government stepped in to eliminate the delaying contractual problems.

The claim was repeated all through Thursday by almost every media organization including state broadcasters BBC and Sky News as well as by local newspapers the Guardian and Financial Times a day after the U.K. achieved the worst death toll in Europe from the coronavirus and the second-worst worldwide.

"There is no problem with medical supplies that are donated by Turkey or purchased from the country. All of them comply with international standards," said Turkey's Deputy Foreign Minister Yavuz Selim Kıran said in response to the reports.

U.K. officials: Claims are "not true"

Turkish officials were not the only ones who immediately reacted against the manipulated news.

"Stories in the U.K. media that 400K items of PPE sent from Turkey are unusable are untrue," Dominick Chilcott, the U.K.'s ambassador to Turkey, said Thursday.

Chilcott said in a series of tweets that the news stories involving the so-called "useless PPE from Turkey" were not true. He said the U.K. was thankful for Turkey's aid in supplying PPE.

"The majority of the delivered products are still waiting to be tested in the warehouses in the U.K. and Turkey," Chilcott wrote in Turkish.

The official also pointed out that the dispute was between the private company and the U.K., while an official from Selegna Tekstil, which produced the gowns, told the BBC that the company has not received any complaints from the National Health Service (NHS), the British embassy in Ankara or British government officials regarding the quality of the PPE.

A U.K. government spokesperson also said in a statement to Anadolu Agency (AA) on Thursday that just a small portion of the PPE sent by a Turkish private company did not conform to the standards. He said the majority passed the test and got the green light to be used in the field.

The spokesperson added that when a private firm wasn’t able to deliver the products on time, Turkish authorities stepped in and supplied 68,000 gowns. All of them passed the quality check and will be distributed to the personnel who need them. In the statement, he said the Turkish government was very helpful during this process and accelerated the export permit, as well as helping with the supply of protective gowns. He added that Turkey had previously donated gowns to the country.

According to the Telegraph daily, everything was started with an e-mail from a Turkish businessman, Mehmet Düzen, on behalf of Selegna Tekstil to the U.K.'s Health Ministry last month, ensuring that they can provide protective overalls for the NHS.

"In his message, the businessman said he had a factory capable of churning out hundreds of thousands of hospital gowns, each made to stringent safety standards and fit for the NHS front line," a Telegraph article titled "Revealed: How an email from a Turkish T-shirt salesman led to a PPE fiasco" reported.

After two weeks of not responding, as the need for the overalls increased, the ministry demanded hundreds of thousands of products from the company.

"Back-and-forth discussions began over an order of 400,000 gowns, to be produced at the Selegna factory and flown back to the UK. NHS officials sent over complicated documents setting out UK standards in detail, including sleeve lengths and the type of non-woven material needed to repel virus-carrying fluid," the article said.

However, despite demanding such a large amount of products in a time of such necessity, the Health Ministry, as revealed by the article, failed to have a proper inspection of the company, ignoring the fact that it was actually a newly established, inexperienced firm, only in business since Jan. 31, 2020.

"As coronavirus began to spread around the world, Mr. Düzen and his sister Naile, the firm's owner, decided to switch production to high-quality medical gear. One factory that previously made sweets was instructed to make masks instead," the article stated.

"On Thursday, April 17, the deal was approved and the order placed. The next day, the Department of Health and Social Care (DHSC) officials paid a deposit, with the contract stating that the full balance would be paid on delivery," the article detailed.

Meanwhile, as pressure on U.K. ministers increased with the demand of overalls reaching extreme levels, the Communities Secretary Robert Jenrick announced that the delivery for the U.K. was about to arrive from Turkey.

"Today I can report that a very large consignment of PPE is due to arrive in the UK tomorrow from Turkey, which amounts to 84 tonnes of PPE and will include, for example, 400,000 gowns – so a very significant additional shipment," Jenrick said on April 19.

However, since the firm did not have enough products on hand and there was an export ban in place, Selegna Tekstil failed to provide the order on time. Upon the demand of the U.K. government, the Turkish government provided special permission for the firm to export the supplies. Despite being aware of the lack of products at hand, the U.K. government sent a cargo plane to Turkey on the night of April 19 anyway.

"On Monday, as the 'Air Jenrick' mission dominated news coverage, the decision was taken to send the Airbus A400-M plane to Turkey anyway in order to apply pressure," the article said.

Ankara was there for London

However, since the products were still not ready, the Turkish government had to get involved once again with an attempt to save the U.K. from being in a troublesome position.

"Eventually, the Turkish government stepped in to help UK ministers save face. It was arranged that a last-minute shipment of only 32,000 gowns made by Ushas, a state-backed firm, would be packed onto the plane," the article said.

According to the article, the firm, on the other hand, had provided 67,000 products to the U.K. so far, which had been checked by the U.K. officials in Turkey "to make sure they adhered to the agreed standards." Out of these 67,000 gowns, 2,400 of them failed to meet the standards while 4,500 passed the tests, with more to be inspected soon.

"Senior sources admitted on Thursday that a further 170,000 Selegna gowns were blocked by the UK after the alarm was raised, and are still in Turkey being checked by the Turkish Standards Institute," the article indicated, adding that although it is not exactly known how much the U.K. has already paid for the products, the total order is estimated to cost around 300,000 pounds ($371,270).

The article also referred to a spokesman for the Department of Health, expressing that he delivered the gratitude of the U.K. ministers for the assistance of the Turkish government.

This is not the first time that Western media took up a biased stance against Turkey. At the beginning of the outbreak, several Western media outlets, including the BBC, The New York Times and the Independent, posted pictures from Turkey for the articles regarding the U.S. flight ban to Europe, misleading the readers to assume that the country was also included in Washington's list.

Prior to the pandemic, this twisted attitude against Turkey had revealed itself on many occasions, especially when it came to the fight against terrorism. Turkey's Operation Peace Spring was launched on Oct. 9 to eliminate terrorists from northern Syria east of the Euphrates River in order to secure Turkey's borders, aid in the safe return of Syrian refugees and ensure Syria's territorial integrity. Being the third cross-border operation of the country in Syria, the move received massive reactions from the West with the news full of manipulation and deception. Although the operation was against the terrorist elements in the region, mainly the PKK and the YPG, the Western media portrayed it as if it were against the Kurds with no reason and was causing a massive humanitarian crisis in the region, despite the fact that it was launched in accordance with international law. The anti-Turkey sentiments reached a point that Turkish people in Western countries started to be attacked by PKK supporters while Western communities kept their silence. The attacks not only targeted Turkish civilians but also foreign missions and businesses, and Turkish associations and mosques, with the sympathizers of the terror group even setting fire to these places in some instances.

Another terrorist group that benefits from Western media's prejudice against Turkey is the Gülenist Terrorist Group (FETÖ), which is responsible for organizing a failed coup attempt in July 2016 against the Turkish government that claiming hundreds of civilians' lives. Regarding the issue, Western media blamed to ignore key developments and instead focused on twisting the facts. Many stated that almost none of the major Western media outlets focused on the challenges faced by Turkish democracy and the popular resistance. Rather, their portrayal of the situation was considered as a twisted misrepresentation of the entire scenario. For many pundits, outlets like The New York Times, the Guardian, the Times, BBC, CNN, Der Spiegel, Bild, ARD, Al-Jazeera English and the Daily Mail did not bother with objective journalism and focused little on facts, such as the coup plotters firing at civilians, carrying out airstrikes on Parliament, blockading the Bosporus bridge (now the July 15 Martyrs Bridge), and occupying the state-run TV. They, instead, claimed to prefer focusing on President Recep Tayyip Erdoğan instead and continued their obsession over his "consolidation of power" in the country.