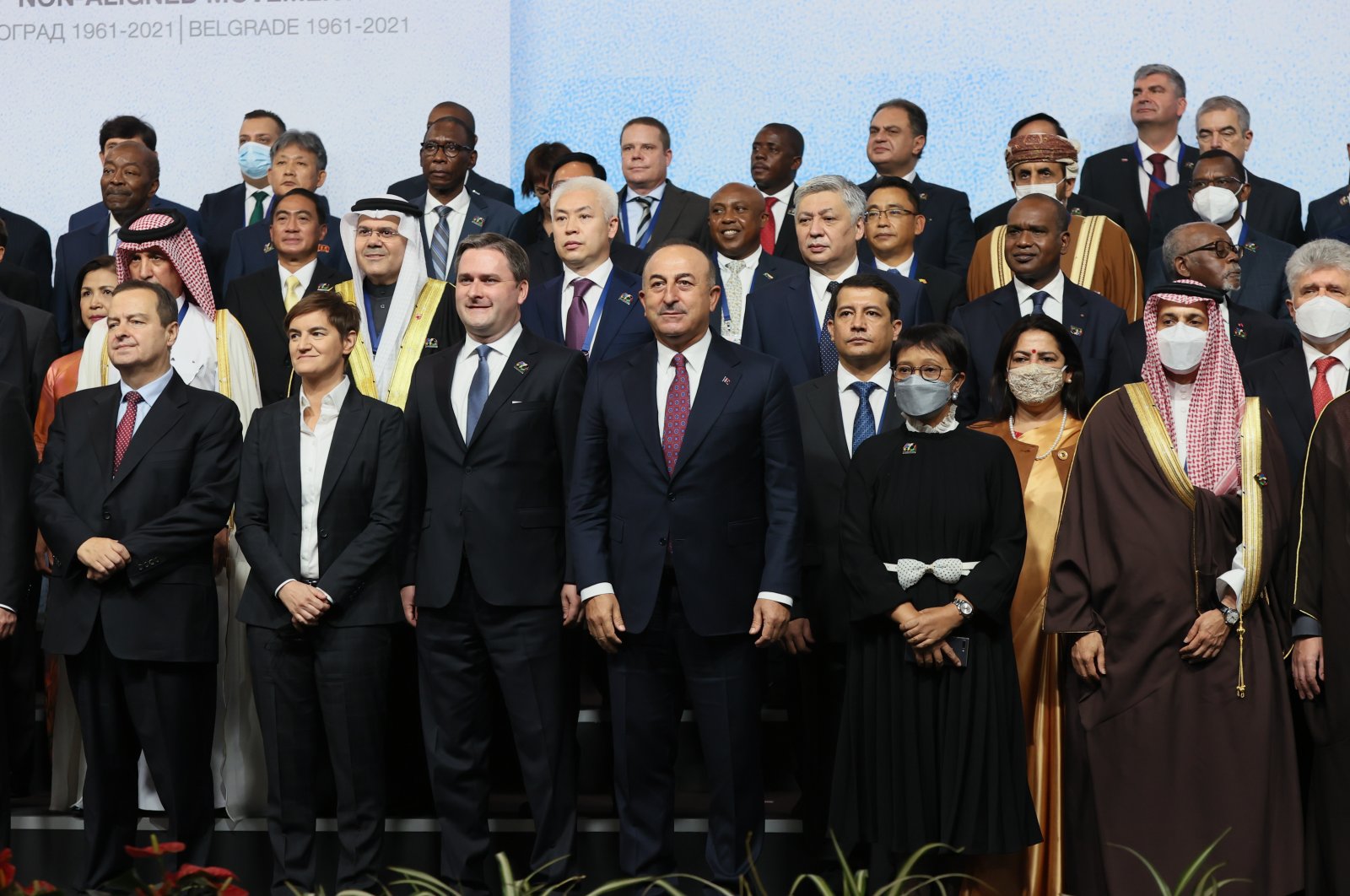 Foreign Minister Mevlüt Çavuşoğlu on Monday reiterated Turkey's call for a more inclusive system of global governance for a fairer world as he drew attention to rapidly increasing imbalances.

Çavuşoğlu spoke at the 60th-anniversary meeting of the Non-Aligned Movement (NAM) held in Belgrade, hosted by Serbia, as the only special guest country representative to participate at the ministerial level.

Emphasizing the rapid increase in inequalities in the world, Çavuşoğlu said: "According to United Nations reports, rising inequalities negatively affect more than 70% of the world's population."

Describing NAM as the voice of a fair, inclusive world in line with the Bandung principles, Çavuşoğlu said: "60 years ago here in Belgrade, non-aligned countries adopted their first declaration. In this declaration, they called for action in three main areas. Economic inequalities, U.N. reform and a multilateral and inclusive approach to global issues. It is striking that we are still discussing these issues today."

Noting that NAM pointed to the development and technology gap between developed and less developed countries in 1961, Çavuşoğlu stated that this gap has increased as technological developments have accelerated.

Emphasizing that Turkey has done its part by hosting the "U.N. Technology Bank for Least Developed Countries," Çavuşoğlu said: "The Belgrade Conference called for the enlargement of the U.N. Security Council. By saying 'The World Is Bigger Than Five,' we also call for a more inclusive and representative U.N. system."

Noting that NAM can make a difference in areas like sustainable development, universal access to COVID-19 vaccines, the Palestinian cause and the fight against terrorism, the minister said: "Active multilateralism that works for all should be our common goal. Our world today is not the world of 1961. The Cold War is over. The bipolar world has turned into a multipolar world. Our tests have also become more complex. However, the basic principles of the Belgrade Declaration remain up-to-date. We support the non-aligned countries of 2021 to have a stronger voice."

NAM is made up of 120 members countries and 17 countries with observer status. Turkey has been invited to NAM summits and foreign minister meetings since 2006 although it is not a member.

Çavuşoğlu last accompanied President Recep Tayyip Erdoğan at the NAM summit held in Baku, the capital of Azerbaijan, in 2019.

During his recent visit to New York to attend the U.N. General Assembly, Erdoğan once again called for a fairer global system.

In his speech at the opening session of the U.N. General Assembly, Erdoğan expressed his views on issues concerning international peace and security. From the rostrum of the General Assembly, he expressed that a fairer world is possible and that the responsibility falls on the international community to accomplish this goal. He reiterated the importance of cooperation and solidarity at a time when humanity is overwhelmed by the threat of epidemics, natural disasters and their severe consequences.

Formed in 1961 under the leadership of the former Yugoslavia when the world began to polarize between East and West, NAM brought together leaders from over 100 countries in Belgrade, the capital of Serbia, to mark its 60th anniversary.

With the formation of the movement, the leader of the former Yugoslavia, Yosip Broz Tito, became a globally recognized statesperson. NAM was defined as a third bloc alongside the United States and the Soviet Union during the Cold War.

The movement was established in order to avoid being party to the divisions between East and West. It began to disintegrate in the 1970s when some countries began opting to join the other two blocs.

NAM managed to bring together more than 100 countries, from Yugoslavia to India and Indonesia, and prevented the countries' economic and political problems from escalating to serious levels.

With the death of Tito in 1980, NAM completely lost its influence.

Although NAM lost sway on the world stage in a short time, the countries involved in the movement continued to organize conferences and summits where current issues were discussed.

Belgrade, once the capital of Yugoslavia, is hosting the summit again as part of the 60th anniversary of the NAM, which now includes more than 100 countries.

The summit, attended by Foreign Minister Çavuşoğlu as the guest of honor, brings together representatives of 105 countries and nine international organizations.

The two-day summit is considered a high-participation event that is taking place despite the coronavirus pandemic in Europe.

The last summit was held in the capital Baku in 2019, hosted by Azerbaijan, which was included in the NAM in 2011 and is the current secretary-general.