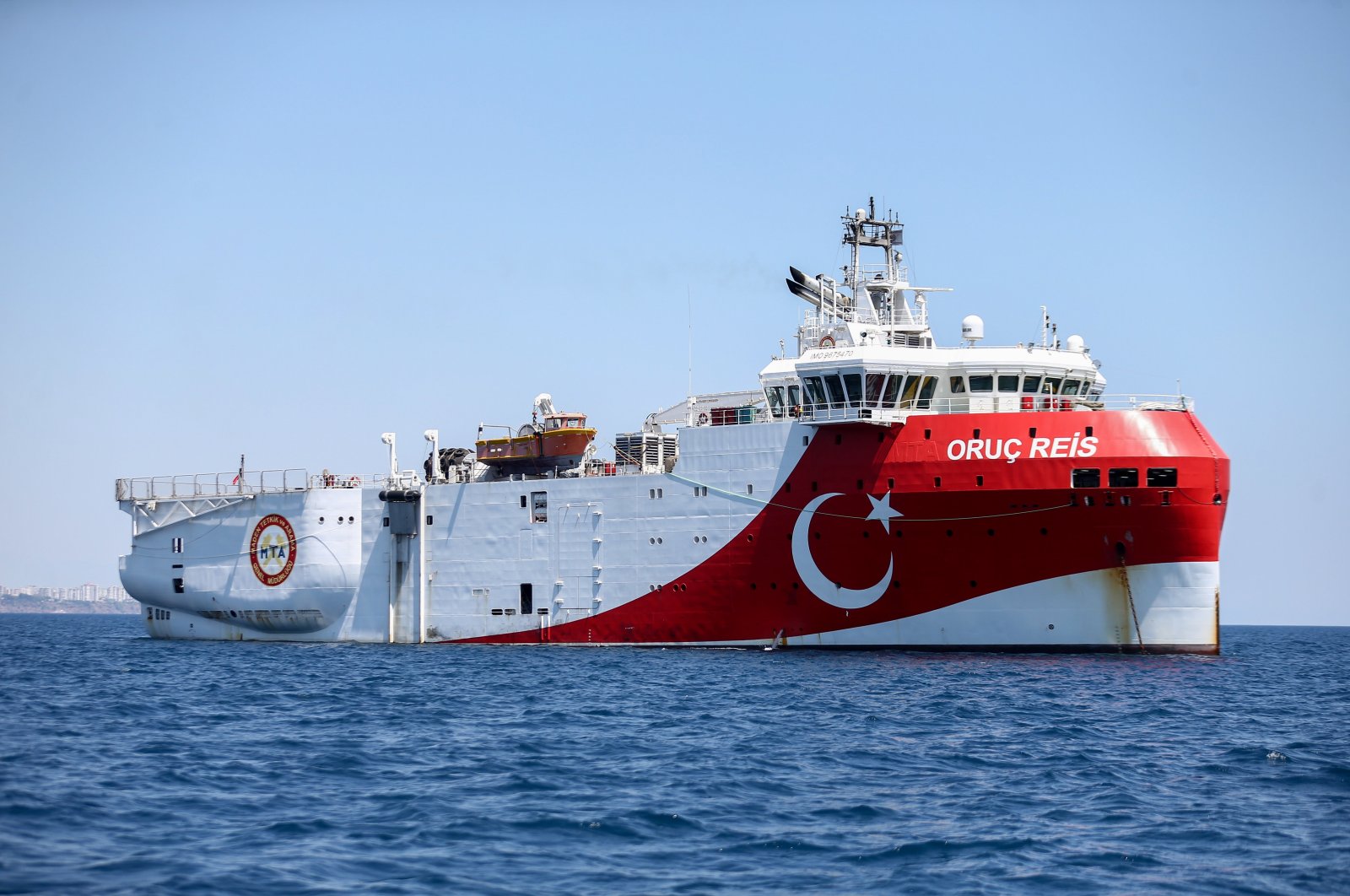 While Turkey insists on dialogue to resolve disputes in the region, France’s attempt is the latest example of its provocative and uncompromising approach

French President Emmanuel Macron on Thursday hosted leaders from Mediterranean states for a summit set to be dominated by growing tensions between Turkey and EU states in the east of the sea.

EuroMed 7 is an informal group of seven EU Mediterranean states, sometimes dubbed "Club Med," that held its first summit in 2016 and notably does not include Turkey.

But the meeting on the French island of Corsica brought together leaders of France, Italy, Malta, Portugal and Spain with Eastern Mediterranean EU members Greece and the Greek Cypriot administration.

France has strongly backed Greece and the Greek Cypriot administration in a growing standoff with Turkey over hydrocarbon resources and naval influence in the Eastern Mediterranean that has sparked fears of conflict.

The aim of the talks is to "make progress in the consensus on the relationship of the EU with Turkey above all ahead of the 24-25 September EU summit," a French presidential official said.

Reaffirming Macron's policy toward Turkey, the official said that France wants a "clarification" in relations with Ankara which should be an "important" partner.

Turkey is one of the countries with the longest history with the union, including the longest process of negotiations. The country signed an association agreement with the EU in 1964, which is usually regarded as a first step to eventually becoming a candidate. Applying for official candidacy in 1987, Turkey had to wait until 1999 to be granted the status of a candidate country.

Some member states will be pressing for sanctions against Turkey at the EU summit, with French Foreign Minister Jean-Yves Le Drian saying over the weekend that such measures were on the table.

"We Europeans need to be clear and firm with the government of President (Recep Tayyip) Erdoğan which today is behaving in an unacceptable manner," Macron told reporters in Corsica before the summit was launched.

He said that at the moment Turkey was "no longer a partner in the region" of the Eastern Mediterranean due to its behavior, though he hoped to "restart a fruitful dialogue with Turkey."

Greek media said the possible sale by France of Rafale fighter jets could be on the table, in a sign of the increasingly strong alliance between Paris and Athens.

In response to Macron's comments before the meeting, Turkey on Thursday slammed his remarks targeting the country and President Erdoğan.

Releasing a statement, the Foreign Ministry said that Macron once again made an arrogant statement reflecting his old colonialist reflexes.

“In fact, Macron's statements are a manifestation of his own incompetence and despair. The world has left behind the days when they freely acted. Macron, whose sneaky foreign policy plans were spoiled by us, every day attacks Turkey and our president with his feeling of grudge,” it added.

The statement added that Macron endangers the EU’s interests with his "individual and nationalistic stance."

Çelik said Macron’s statement saying that Europeans must be clear and firm with the government of Erdoğan, not with Turkey as a nation, is “an old and unethical plot used by colonialists.”

“They used to display fake affection to exploit people but would target patriotic leaders,” Çelik said on his Twitter account Thursday, adding that it is an “honor” for colonialist mindsets to target the president.

Çelik continued by saying that Macron has been wrong about everything he has been saying since he took office and has been extremely unsuccessful in his foreign policy.

“Macron is failing with his support of the PKK/PYD in Syria, (putschist Gen. Khalifa) Haftar in Libya and Greece in the Mediterranean,” Çelik said.

The AK Party spokesperson continued by saying that differentiating between Erdoğan and the Turkish people is an untenable approach, and Macron will “receive the necessary historic response” in this regard.

Ahead of the meeting in Corsica, Mitsotakis also said in an opinion piece published on Thursday that the European Union must impose "meaningful" sanctions on Turkey unless Ankara pulls its maritime assets from disputed areas in the Eastern Mediterranean.

"We do need dialogue, but not when held at gunpoint. What threatens my country's security and stability threatens the well-being and safety of all EU member states," Mitsotakis said in an article published in the London Times, Germany's Frankfurter Allgemeine Zeitung and France's Le Monde newspapers.

This month, EU leaders are expected to specify their response to Turkey. If Turkey does not withdraw its assets, "meaningful sanctions" should be imposed, the Greek prime minister wrote.

"If Europe wants to exercise true geopolitical power, it simply cannot afford to appease a belligerent Turkey," Mitsotakis said. Turkey, he said, still had time to avoid sanctions and "take a step back."

"They should stand down, return to the table, and pick up from where they left off when they quit exploratory talks in 2016. And if we cannot agree, then we must seek resolution at the Hague," he said, referring to the international court for sovereign disputes.

'Greece must act with common sense’

In response to these developments, Turkey’s Parliament speaker said Wednesday that Greece should not let it be used by countries trying to exploit it for their own domestic political games and ambitions.

Instead, Greece must act with common sense and should respect international law, treaties and Turkey's rights in the Mediterranean, Mustafa Şentop told journalists in the Aegean province of Izmir.

Şentop said he wonders why other countries, especially France, follow Greece and try to be part of the region and seek their benefits in the Eastern Mediterranean Sea.

"Incompetent politicians try to cover up their wrongdoings in domestic politics with some unreasonable and irrational moves in the international arena," he said.

Şentop stressed that the personal ambitions of such politicians threaten all neighboring countries in the region, especially Greece.

Turkish officials have decried France's interference in the Eastern Mediterranean dispute, pointing out that it has no territory in the region. Commentators have argued Macron is trying to distract from his political failures.

"There are countries trying to use Greece for their domestic political games and ambitions," said Şentop.

Highlighting the importance of international law and treaties, Şentop said Turkey is determined to protect its rights, borders and "Blue Homeland," the area of Ankara's territorial claims in the Eastern Mediterranean region, in the context of international law.

He underlined that Turkey is always open to diplomatic attempts to negotiate the Mediterranean issue, but if other countries want to try other methods, Turkey has the power to defeat them.

"Turkey has the power to do this. It is much more powerful than it was 100 years ago," he said, referring to when Turkey defeated Greek forces in its War of National Independence.

According to the statement by the Turkish National Defense Ministry, Akar and Kramp-Karrenbauer exchanged views on bilateral defense and security relations, as well as regional issues, particularly the developments in the Eastern Mediterranean.

Turkey does not favor a deadlock but rather a resolution of problems through dialogue, said Akar during the phone call, the statement added.

Akar also noted that other countries should approach the issue with "common sense and spirit of the alliance."

Turkey is righteous and resolute, will never allow any fait accompli and will continue to defend its rights stemming from international law, he stressed.