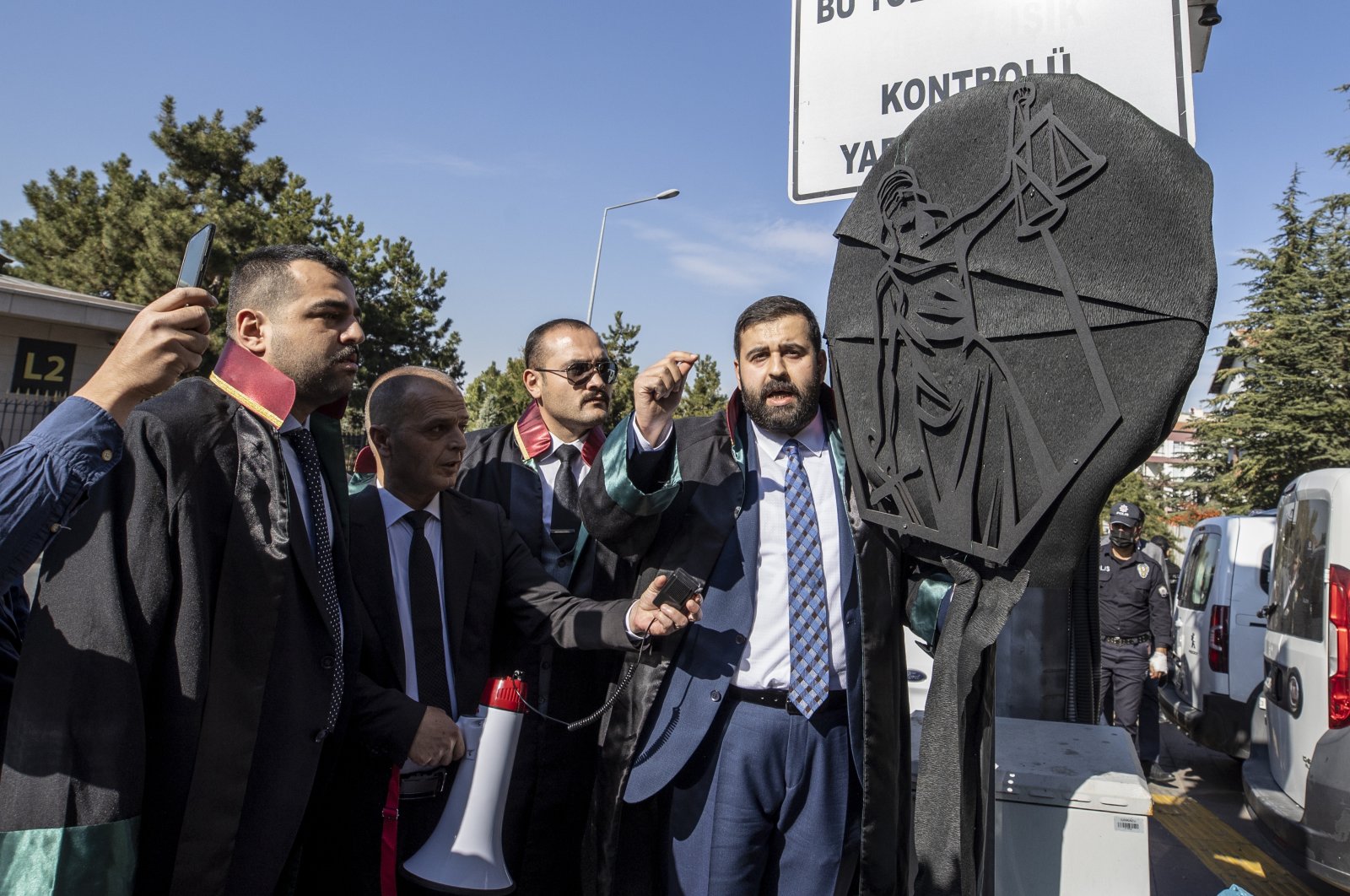 Lawyers and representatives of some NGOs protest Greece's rights violations against the Turkish minority in Western Thrace in front of the Greek embassy in the capital Ankara, Turkey, Oct. 8, 2021. (AA Photo)
by DAILY SABAH WITH AA Oct 18, 2021 11:37 am
RECOMMENDED

The leaders of the Muslim Turkish minority in Greece's Western Thrace are threatened and insulted and brought to court in front of our people, Xanthi's (Iskeçe) elected mufti Ahmet Mete said Monday, noting that the Greek authorities suppressed the fundamental rights and freedoms of the Muslim Turkish minority in Western Thrace.

Speaking to Anadolu Agency (AA), Mete talked about Greece's attitude and pressures that threaten the freedom of religion of the Muslim Turkish minority.

Mete pointed out that the mufti institution in Western Thrace was regulated by the principles in the Treaty of Lausanne, he said: "The Greek side has denied the rights of the minority it was entrusted, it made concerted efforts to usurp them."

Stating that the Muslim Turkish minority in Western Thrace has been "losing blood" since the post-Ottoman era, he stated that the circular issued by the Greek authorities for the teaching of minority students in their schools during Friday prayers is the latest example of this.

Mete pointed out that mufti offices have a very important function in ensuring the unity and solidarity of the minority in this region. "The Greek state, of course, knows this. The last institution it wants to acquire is the mufti," he added.

He drew attention to the "appointed mufti" practice by the Greek authorities to weaken the position of the muftis here in the Muslim Turkish community in Western Thrace.

Emphasizing the vital importance of the unity and solidarity of the Turkish minority at this point, Mete said: "(Greece) probably sees these lands it bought without war as cheap. It disregards the will of the people and instead relies on the backing of the European Union."

Reiterating that they stayed in the country similar to the Greek minority that chose to stay in Istanbul in accordance with the Treaty of Lausanne, Mete said: "The principle of reciprocity must be employed. Turkey, on the basis of reciprocity, needs to use the power of the state to take away the rights of Christians residing there in the same way they were taken from us and give them the same rights we have here, so that we can stand here. We will endure as long as we can, but we cannot wrestle with states ... We are still determined to protect our mosques, which is our last fortress, but the points we can afford are certain. The priest election takes place there in the church, and if Turkey accepts it, Greece must also accept it. If Greece does not accept it, Turkey should reciprocate but things will get better from there on, two communities will start living here as before."

Mentioning the racist behavior they were exposed to in Greece, Mete said: "The people at the head of the Western Thrace Muslim Turkish minority are threatened and insulted and we are brought to the courts in front of our people. While it is up to us to fix some of these, the rest of the responsibility falls on the homeland."

Emphasizing that as elected muftis in the region, they take their power from the people, Mete said: " There is a Turkishness in Western Thrace. The way to keep this Turkishness alive is to know, support and talk about it."

Saying that as a minority, they should think about the future of their grandchildren and act accordingly, Mete added that they will continue their rightful struggle until the end without compromising their unity and solidarity against moves that aim to divide the society.

Earlier this month, a Greek court postponed the trial of the elected religious leader of the Muslim Turkish minority in defiance of Greek authorities, who have insisted on appointing their own candidate to the post.

Ibrahim Şerif, the elected mufti of Gümülcine (Komotini) in northeastern Greece, had been sued by Greek authorities in March 2018 on charges of usurping authority after he attended a circumcision ceremony in 2016 and was to stand trial on Thursday.

Turkey has frequently urged Greece to comply with the European Court of Human Rights (ECtHR) decisions upholding the freedoms of the local Turkish minority. Ankara in June also condemned a recent Greek court decision to sentence the elected mufti of Iskeçe to 15 months in prison, describing the decision as "another manifestation of the legal pressure and intimidation policies by Greece against the Western Thrace Turkish Minority's elected Muftis by their own will."

Şerif was elected mufti of Komotini in 1990 by the local Muslim Turkish community. Mete, the current mufti of Xanthi, and his predecessor Mehmet Emin Aga had also previously been convicted by Greek courts for usurping authority.

The Western Thrace region of Greece is home to a Muslim Turkish minority of around 150,000 people, where muftis have legal jurisdiction to decide on the family and inheritance matters in the local community.

The issue of mufti elections has been a long-standing problem for the group since 1991.

Turkey has long decried Greek violations of the rights of its Muslim and Turkish minority, from closing mosques and allowing historic religious sites to fall into disrepair, to refusing to allow local groups to use "Turkish" in their name.