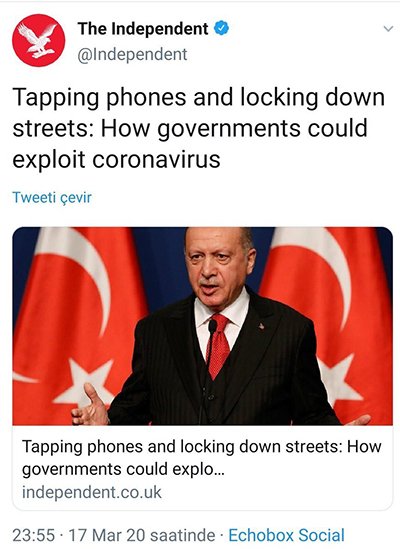 The Independent has become the latest Western media outlet that insists on misleading readers by using irrelevant Turkey-related images in their coverage of the coronavirus despite harsh criticism from Turkish authorities and the public.

Most recently, the British media outlet used an image of President Recep Tayyip Erdoğan in a tweet for a news story titled “Tapping phones and locking down streets: How governments could exploit coronavirus."

Although Turkey did not take such extreme measures against the threat of the coronavirus epidemic, it seems that some media outlets are exploiting COVID-19 to promote their bias against Turkey, creating false perceptions.

It was not the first time. The Western media’s use of irrelevant photos from Turkey in their coverage about the coronavirus developments has drawn criticism from Turkish authorities and the public.

Last week, the BBC used an image showing Turkish fans wearing masks in the stands during a football match in Turkey between Istanbul's Başakşehir and Copenhagen for a story titled "Trudeau and wife isolate after she tests positive." Although the story was about the Canadian prime minister and his wife, the BBC once again opted to use photos from Turkey.

Several Western media outlets, including The New York Times, BBC and CNN International, also opted to use images from Turkey's cultural and commercial capital Istanbul with their news stories about the U.S.' 30-day ban on all flights from Europe due to the coronavirus threat. Given that Turkey was not even included in the ban, the selection of photos triggered suspicion of an anti-Turkey bias or agenda adopted by Western media outlets.

"It is deplorable that @CNN deliberately and insistently publishes photos from Istanbul in its coverage on #Covid_19 developments in US," the embassy said on Twitter.

"@CNN has to explain to its readers the logic of using a picture of a mosque in Istanbul in news concerning visits to #Congress or CA prisons," it wrote, referring to the U.S. state of California.

CNN International used the photo of an Istanbul Municipality worker disinfecting the Kılıç Ali Paşa Mosque to prevent the spread of the COVID-19 in several of its news stories about the disease, but none of them were related to Turkey.

COVID-19 emerged in Wuhan, China, last December, and has spread to at least 163 countries and territories. The World Health Organization (WHO) has declared the outbreak a pandemic.

Out of over 197,000 confirmed cases, the death toll now exceeds 7,900, while over 81,000 patients have recovered, according to Worldometer, a website that compiles new case numbers.

The current number of active cases is more than 107,000 – 93% mild and 7% in critical condition, according to the website.

The WHO has declared Europe as the new epicenter of the coronavirus.