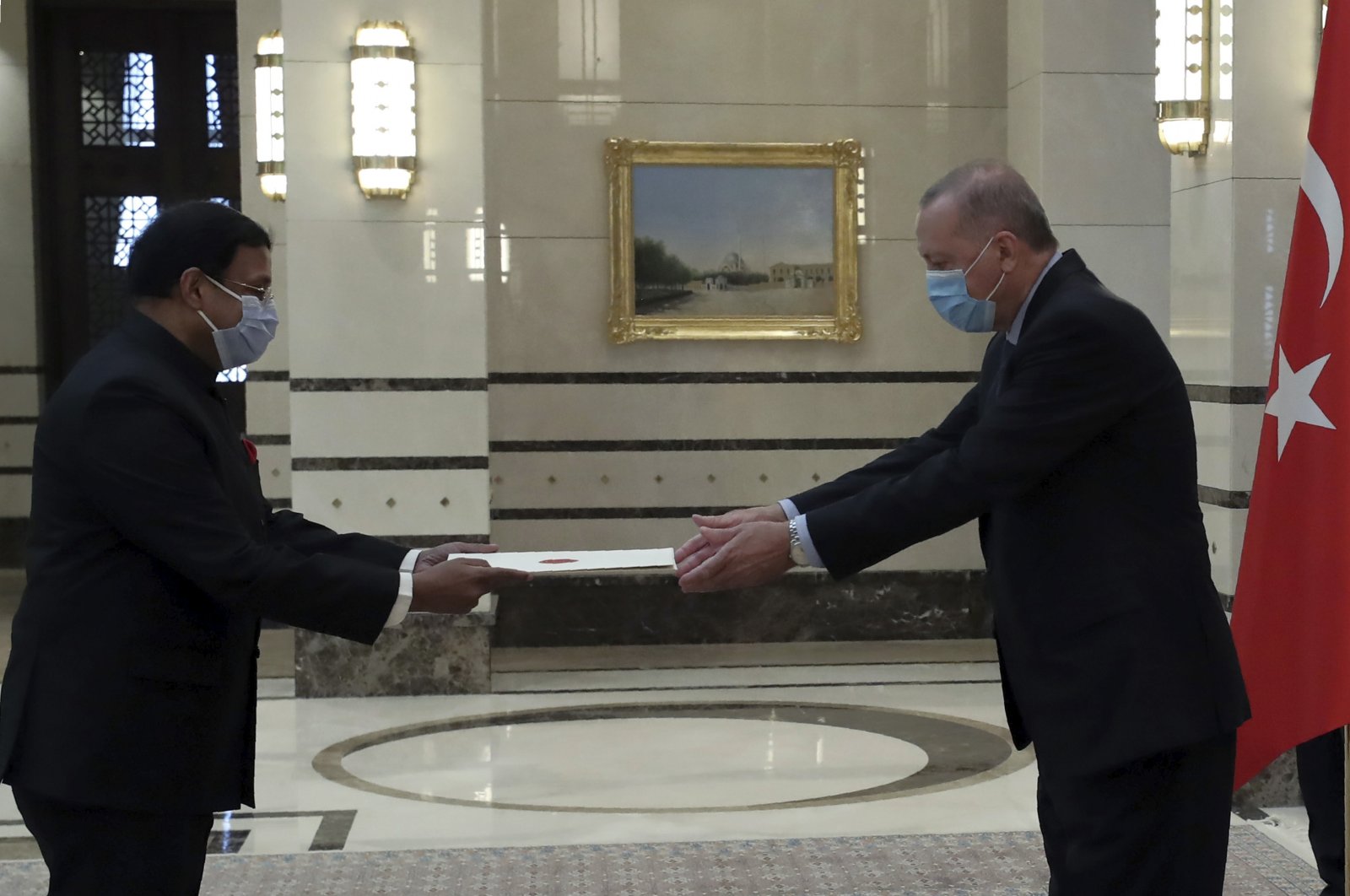 Turkey's President Recep Tayyip Erdoğan, wearing a face mask to protect against the spread of coronavirus, receives a letter of credentials from the new ambassador of India, Sanjay Kumar Panda, during a ceremony at the presidential palace, in Ankara, Turkey, Wednesday, Aug. 19, 2020. (Turkish Presidency via AP, Pool)
by DAILY SABAH WITH AA Jan 26, 2021 10:30 am
RECOMMENDED

The Indian ambassador to Turkey urged “qualitative transformation” in bilateral engagements between the two countries Tuesday.

In a virtual address to mark the 72nd Republic Day of India, Ambassador Sanjay Panda said the two countries “share the attributes of democracy, secularism and rule of law.”

“(Mustafa Kemal) Ataturk’s name and his legacy hold a particular appeal for every Indian,” he said, referring to the founder of the Republic of Turkey.

“We have to join hands and demonstrate our solidarity and resilience while taking on these challenges,” he said.

“It is high time that we put aside external issues that distract us from our larger goals,” he said, adding: “It is time now to recognize this big picture and bring about a qualitative transformation in our bilateral engagement.”

“It is only then that India and Turkey can realize their full potential as natural partners in the 21st century,” said the Indian ambassador.

Turkey had criticized India's decision to scrap nominal political autonomous status for Jammu and Kashmir. The Indian government was riled in February 2020 when President Recep Tayyip Erdoğan compared the struggle of Kashmiris with the Ottoman Empire's fight during World War I.

The Kashmir dispute, one of the oldest on the agenda of the U.N. Security Council, erupted between India and Pakistan in 1947. The Security Council called for a referendum to decide the region's fate in 1948. While India says the decision to support accession to India through elections held in territories controlled by an administration that is backed by New Delhi made a referendum unnecessary, the U.N. and Pakistan say a referendum needs to take into account the views of voters throughout the former princely state.

Kashmir is held by India and Pakistan in parts but claimed by both in full. A small sliver of the region is also controlled by China. Since they were partitioned in 1947, New Delhi and Islamabad have fought three wars, in 1948, 1965 and 1971, two of them over the disputed territory.

India is celebrating its 72nd Republic Day to mark the day when in 1950 the country adopted its Constitution.

On this occasion, Panda reflected on the “myriad of challenges” India faces today and said it is time to overcome them.

“We have to eliminate poverty in the shortest possible time, secure jobs for millions of our youth, ensure and strengthen gender justice, improve government capacity to deliver and increase citizen participation in governance,” he said.