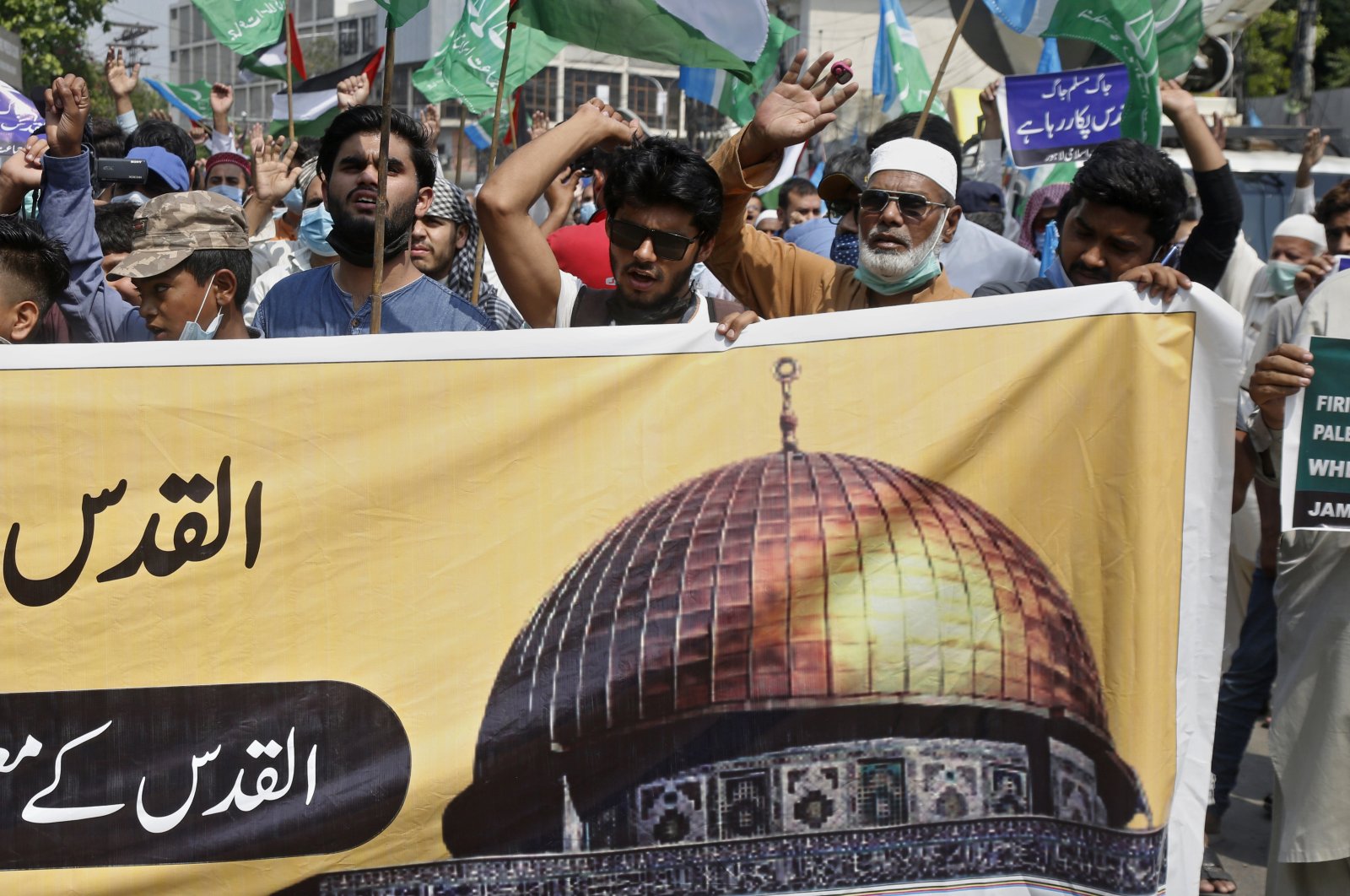 Supporters of the Pakistani religious group Jamaat-e-Islami chant slogans during a rally to condemn Israel's use of force against the Palestinians at the Al-Aqsa mosque compound in Jerusalem, in Lahore, Pakistan, Wednesday, May 12, 2021. (AP Photo/K.M. Chaudary)
by DAILY SABAH May 12, 2021 2:32 pm
RECOMMENDED

Social media giants including Facebook and Instagram are censoring posts that highlight Israel's violence and oppression against Palestinians.

Selçuk Bayraktar, the chief technology officer (CTO) of the drone magnate Baykar, in a Twitter message said that his post on Instagram, that allegedly showed extremist Israelis dancing and chanting as they watched a fire burn outside the Al-Aqsa Mosque, was removed by the company after it labeled the post "hate speech." In the post, Bayraktar had described Israel as a "racist, fascist terror state."

Protesting Instagram's action, Bayraktar said in a Twitter message that "Murdering children and civilians, and singing and dancing while watching the temples they set alight is hate, savagery and massacre."

Bayraktar also stated that Facebook did not allow him to upload the video, accusing both companies of hypocrisy.

With accounts deleted on Twitter and content blocked on Instagram, Palestinian social media users say they have been censored from showing the reality of the unrest in Jerusalem.

The eastern part of the holy city has been hit with the worst violence since 2017, with Israeli attacks centered around the Al-Aqsa mosque, the third holiest site in Islam, since Friday.

On social media, Palestinians have widely shared photos and videos of Israeli forces facing off with residents, in what Amnesty International has denounced as an "illegal and abusive use of force" against "largely peaceful" protesters.

Social media remains an important tool for Palestinians, many of whom believe traditional media coverage does not sufficiently capture the reality of the crisis.

Sada Social, a platform designed to protect content shared by Palestinians online, recorded 200 restrictions in the past week on matters related to Sheikh Jarrah and East Jerusalem.

At least 48 Palestinians have been killed and 305 others injured in Israeli attacks across the Gaza Strip amid rising tension throughout the Palestinian territories after Israeli police stormed the flashpoint Al-Aqsa Mosque compound in occupied East Jerusalem and assaulted worshippers. Five Israelis have also been killed by rocket fire from the Gaza Strip.

The flare-up comes against the backdrop of last week's Israeli court order for the eviction of Palestinian families in the Sheikh Jarrah neighborhood of East Jerusalem.