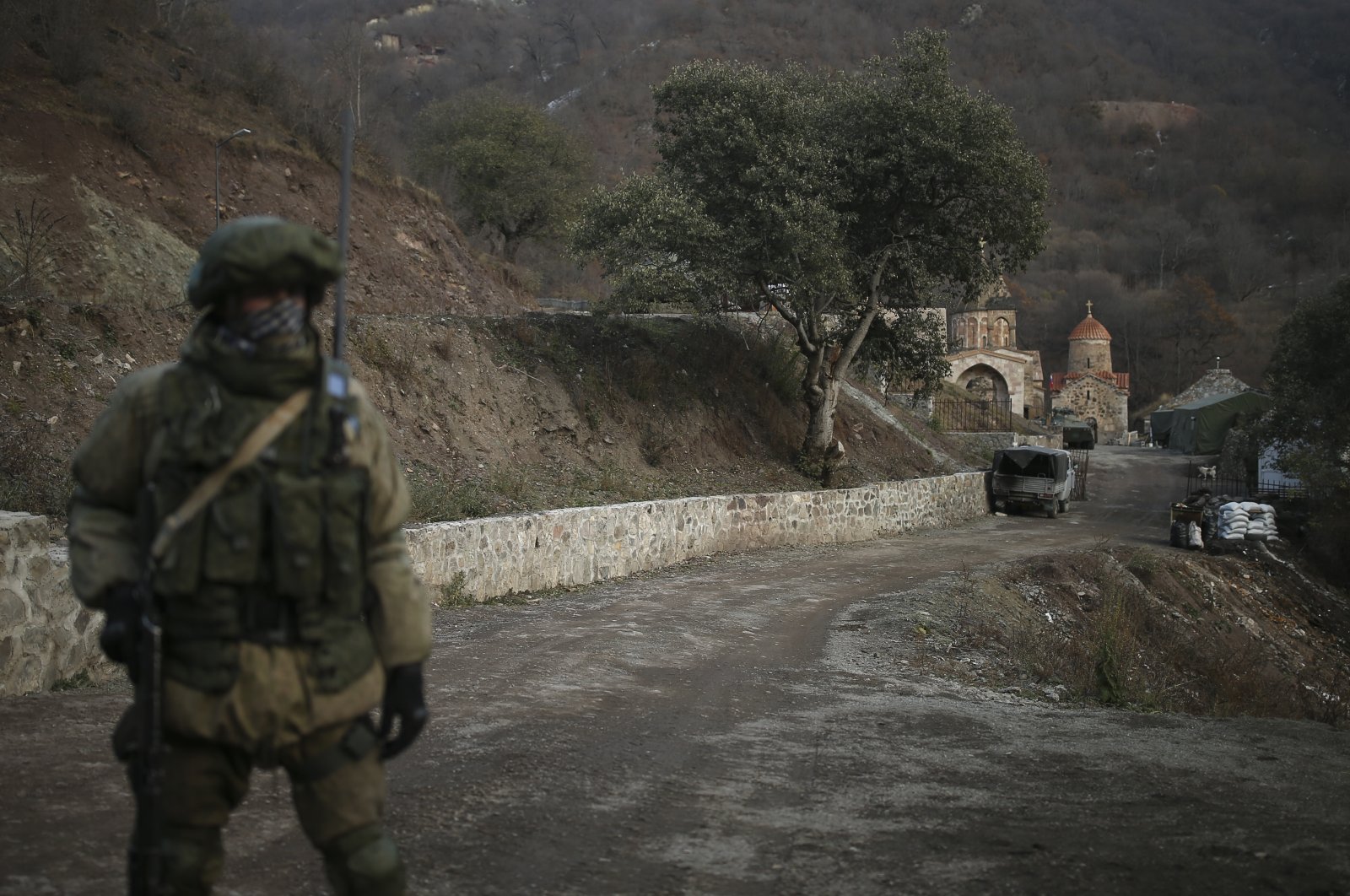 A Russian peacekeeper stands guard at the entrance of the Dadivank, an Armenian Apostolic Church monastery dating to the ninth century, after the transfer of the Kalbajar region to Azerbaijan's control as part of a peace deal, near Kalbajar, Azerbaijan, Dec. 2, 2020. (AP File Photo)
by DAILY SABAH Nov 23, 2021 11:13 am
RECOMMENDED

The ambassador said Iran welcomes the initiative brought up by Erdoğan in November 2020.

The peace initiative consists of establishing a cooperation mechanism in the Caucasus region, comprising three Caucasian states – Armenia, Azerbaijan, and Georgia – and their three neighbors – Russia, Turkey, and Iran. Hence, it's called the 3+3 mechanism.

Farazmand noted that the initiative is also in line with Iran’s foreign policy, which consists of solving regional problems with countries in the region, minimizing escalation, enhancing cooperation and creating a strong region through the utilization of neighboring countries’ skills and expertise.

The ambassador also said all countries have accepted the proposal in principle, with the exception of Georgia.

“Without a doubt, the facilitation of peace and stability in the strategic Southern Caucasus region by ending 30-year-old tensions will create development, trade, investment and transportation opportunities, which will benefit the region and people living here as a whole,” Farazmand told Anadolu Agency (AA).

Erdoğan has frequently called for a six-nation platform comprising Turkey, Russia, Iran, Azerbaijan, Georgia and Armenia for permanent peace, stability and cooperation in the region, stating it would be a win-win initiative for all regional players in the Caucasus region. Turkey believes that long-lasting peace is possible through mutual security-based cooperation among the states and people of the South Caucasus region.

Relations between the former Soviet republics of Armenia and Azerbaijan have remained tense since 1991 when the Armenian military occupied Nagorno-Karabakh, a territory internationally recognized as part of Azerbaijan, and seven adjacent regions. The latest large-scale clashes erupted in the Karabakh region on Sept. 27, 2020, when the Armenian Army launched attacks on civilians and Azerbaijani forces, violating several humanitarian cease-fire agreements. Azerbaijan then launched a counteroffensive operation, later dubbed "Iron Fist," which led to the 44-day conflict ending with the liberation of Azerbaijani lands. During the conflict, Azerbaijan liberated several cities and 300 settlements and villages that were occupied by Armenia for almost 30 years. Prior to that, about 20% of Azerbaijan's territory was under illegal occupation.