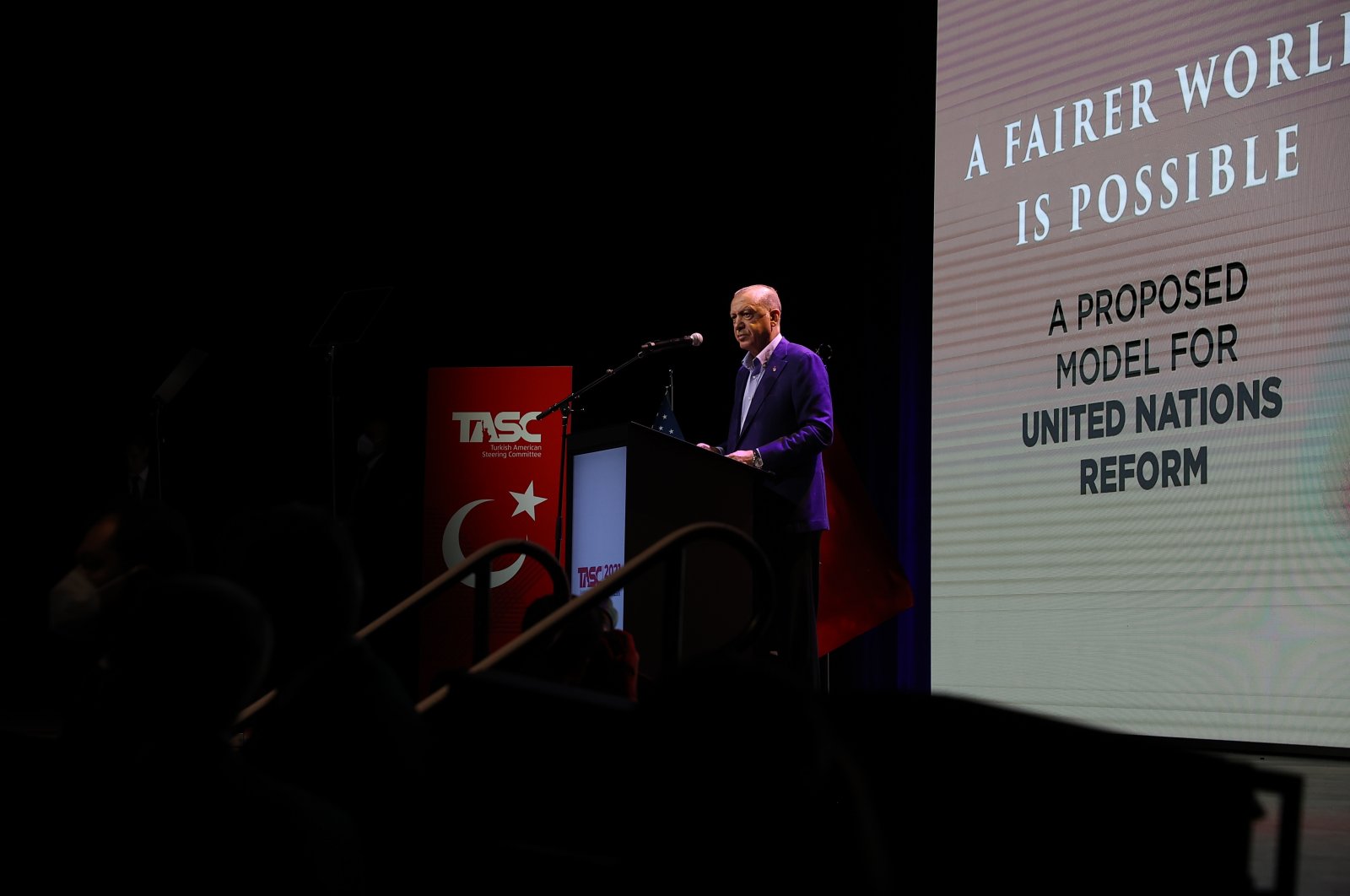 Erdoğan noted that both ideologies have been shaping state policies and have become destructive trends that pose a direct threat to social peace.

"We are fighting against a deadlier and sneakier virus. This virus, which is as dangerous as the coronavirus, is called Islamophobia," Erdoğan said at the "A Fairer World Is Possible" conference organized by the Turkish American National Steering Committee (TASC) in New York City.

"This virus is spreading very quickly in countries that have been portrayed as cradles of democracy and freedom for years," he said.

Noting that Islamophobia and Daesh terrorism share a common ideological fanaticism, Erdoğan said many countries have normalized otherizing Muslims based on their names, clothes or appearance. He said the Muslim community in the United States has especially been targeted in the post-9/11-era, but they have successfully responded to the hatred through legitimate and democratic means.

“You’ve overcome all attempts against weakening Muslims by embracing your unity and fraternity,” Erdoğan said, as he praised the stance of Muslims in the U.S. in difficult times.

Erdoğan noted that Turkey has taken a leading role against Islamophobia on international platforms, while he called on the Muslims in the U.S. to contribute more in the fight against racism and hate speech with their experience.

The president cited the Organisation of Islamic Cooperation (OIC) and the U.N., among others, where Turkey has been working on efforts against Islamophobia.

"We are (also) backing every kind of effort to eliminate all threats to our religion and our Muslim brothers," the president added.

Erdoğan also said that he believes the 300,000-strong Turkish community in the U.S. will be able to take on a more active political role in the future and produce representatives at the state and federal levels. He noted that the Turkish community’s contributions to American society are positively reflected in Turkey-U.S. relations, as he praised Turkish nongovernmental organizations (NGOs) for their work on promoting Turkish culture and history.

Erdoğan arrived in New York to attend the United Nations General Assembly's 76th session Tuesday, where world leaders will give their annual speeches.

Before his address, the president briefly visited the soon-to-open Türkevi Center located at 821 First Avenue in Manhattan across from U.N. headquarters.

He said the 36-story skyscraper is a "monument of pride" that will function not only as a home for Turks but also for the Muslim American community.

The building, which uses traditional Turkish architectural motifs, especially from the Seljuk Empire, rises to the sky in the shape of a tulip and can be seen from downtown Manhattan, the East River and Long Island.

In his remarks, Erdoğan also touched on the subject of terrorist groups – the PKK’s Syrian offshoot YPG and the Gülenist Terror Group (FETÖ) – whose supporters are finding a base in the U.S.

He called on members of the Turkish American community to continue to inform their American counterparts about the true face of these terrorist organizations.

"No matter how big it is, no lie can stand against the sun of truth," said Erdogan, and highlighted unity against such groups.

Regarding FETÖ, Erdoğan reiterated that it is a bloody terror group that hides its dark face under the guise of deception.

FETÖ and its U.S.-based leader Fetullah Gülen orchestrated the defeated coup of July 15, 2016, in Turkey in which 251 people were killed and 2,734 wounded.

During his visit, lasting until Sept. 22, Erdoğan will on Monday inaugurate Turkish House (Türkevi), which is located in Manhattan, right across from the U.N. headquarters.

Turkish House was designed to reflect Turkish culture and history, featuring a multiplicity of Turkish architectural motifs. It will also be a green-friendly building with "LEED Silver" certification.