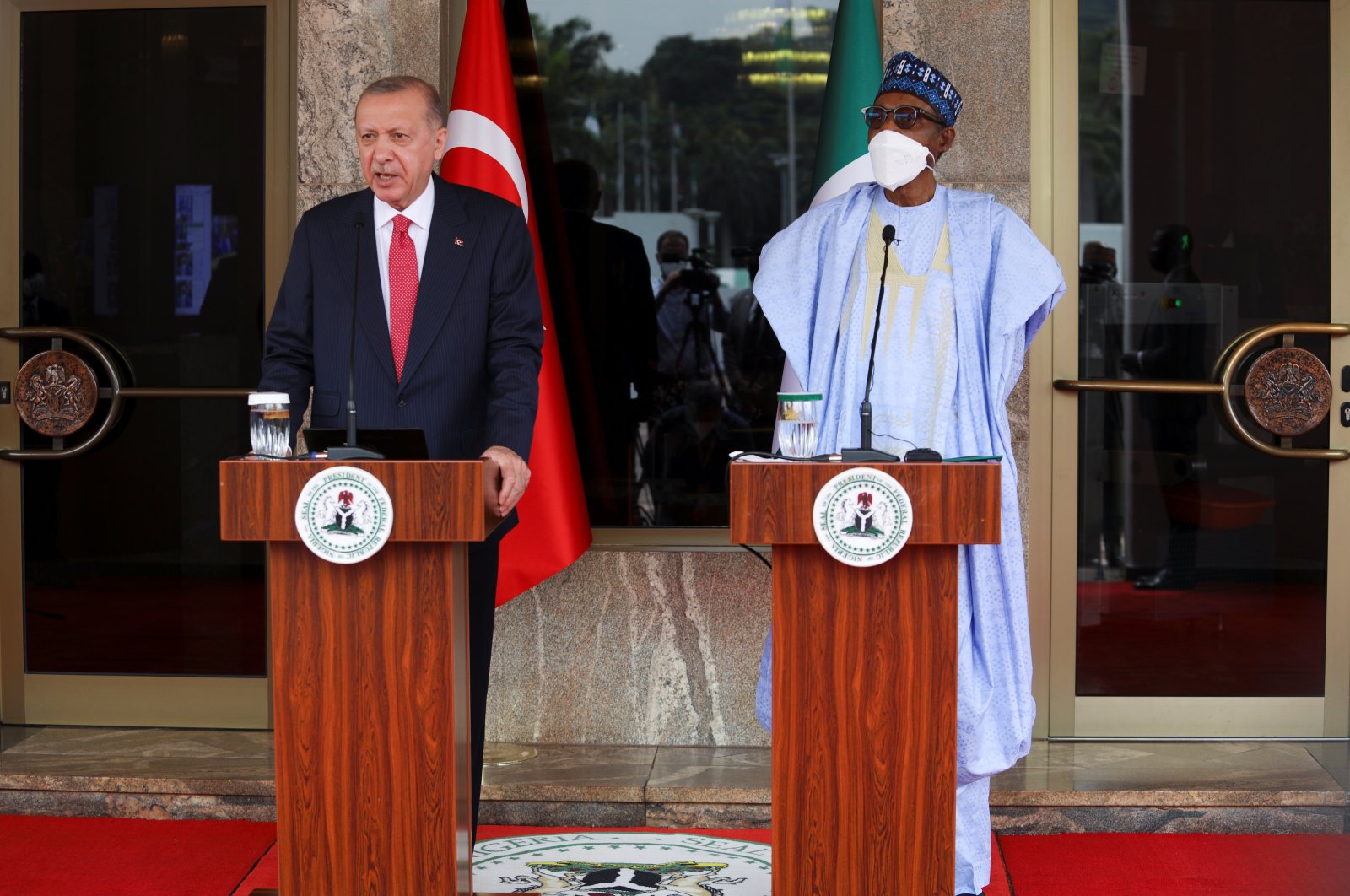 President Recep Tayyip Erdoğan's recent visit to Nigeria has been widely covered by media outlets in the West African nation. Most of the news coverage underlined Erdoğan's call for solidarity in the fight against terrorism.

Some of the most well-known Nigerian outlets, such as the Daily Trust, Punch and Channels TV, headlined statements by Erdoğan on the Gülenist Terror Group (FETÖ), the group behind the 2016 defeated coup in Turkey.

"Terrorists who tried to overthrow me are in Nigeria – Turkey President," wrote the daily Punch on Thursday, a day after the Daily Trust ran the headline: "Turkish President: Terrorists Who Tried To Oust Me Are In Nigeria."

"Erdoğan asked Nigeria to join his country to forge solidarity in the fight against terrorism in the two countries as one of the oldest allies of Turkey in Africa, having seen 60 years of diplomatic ties," the Daily Trust reported.

"As Turkey, we have been closely monitoring the developments unfolding in Nigeria, our brotherly and friendly nation," the daily quoted Erdoğan as saying.

"The terrorist organizations, the armed gangs and the marine bandits are continuously active in Nigeria and the Nigerian authorities are continuously fighting against them. So, in order to cooperate further in the fields of military, defense and security, we are doing everything that will be available."

The Nigerian president also said the official visit by Turkey's president and first lady Emine Erdoğan, was a reflection of the "robust, warm and cordial bilateral relation" between Nigeria and Turkey, it said.

According to the report, the two leaders signed major agreements on a number of key sectors, including energy and the defense industry.

Two other newspapers, The Authority and The Sun, also reported that the first lady Erdoğan also inaugurated a branch of a Turkish cultural center under the country's Yunus Emre Institute in the capital Abuja during their visit.

President Erdoğan on Wednesday concluded a four-day Africa tour during which he paid official visits to Angola, Togo, and Nigeria.

"Thankfully, we completed our visits to Angola, Togo and, Nigeria quite productively and returned to our country," he said on Twitter.

President Erdoğan said that since 2002, in his tenure as both Turkey's prime minister and president, he has visited 30 countries in Africa and held 50 working visits.

"We will continue to stand by our African brothers on their journey for development," he noted.

Erdoğan also posted a graphic showing data on Turkey's trade volume with African countries and the number of Turkish embassies opened on the continent.

Turkey currently has 43 embassies in Africa, up sharply from only 12 in 2002, according to the figures.

The number of African countries that have embassies in Ankara has reached 37, versus only 10 in 2008.

The foreign trade volume between Turkey and Africa is currently $25.3 billion (TL 243.26 billion), while the trade volume with sub-Saharan Africa has reached $10 billion.

Turkey also carried out a total of 7,000 projects in 22 African countries through its state development aid agency, the Turkish Cooperation and Coordination Agency (TIKA).

The tweet also touted cultural activities carried out on the continent by Turkey's Turkish Yunus Emre Institute and the Maarif Foundation.

"Our aim is to win together, to develop together, to grow together, and to walk together with Africa," Erdoğan said in a separate Twitter post.

Flag carrier Turkish Airlines (THY) flies to 41 destinations in 33 African countries, it added.

Turkey has signed a commercial and economic cooperation agreement with 48 African countries, while deals on mutual promotion and protection of investments were inked with 32 others to strengthen the contractual infrastructure with the continent, it said.