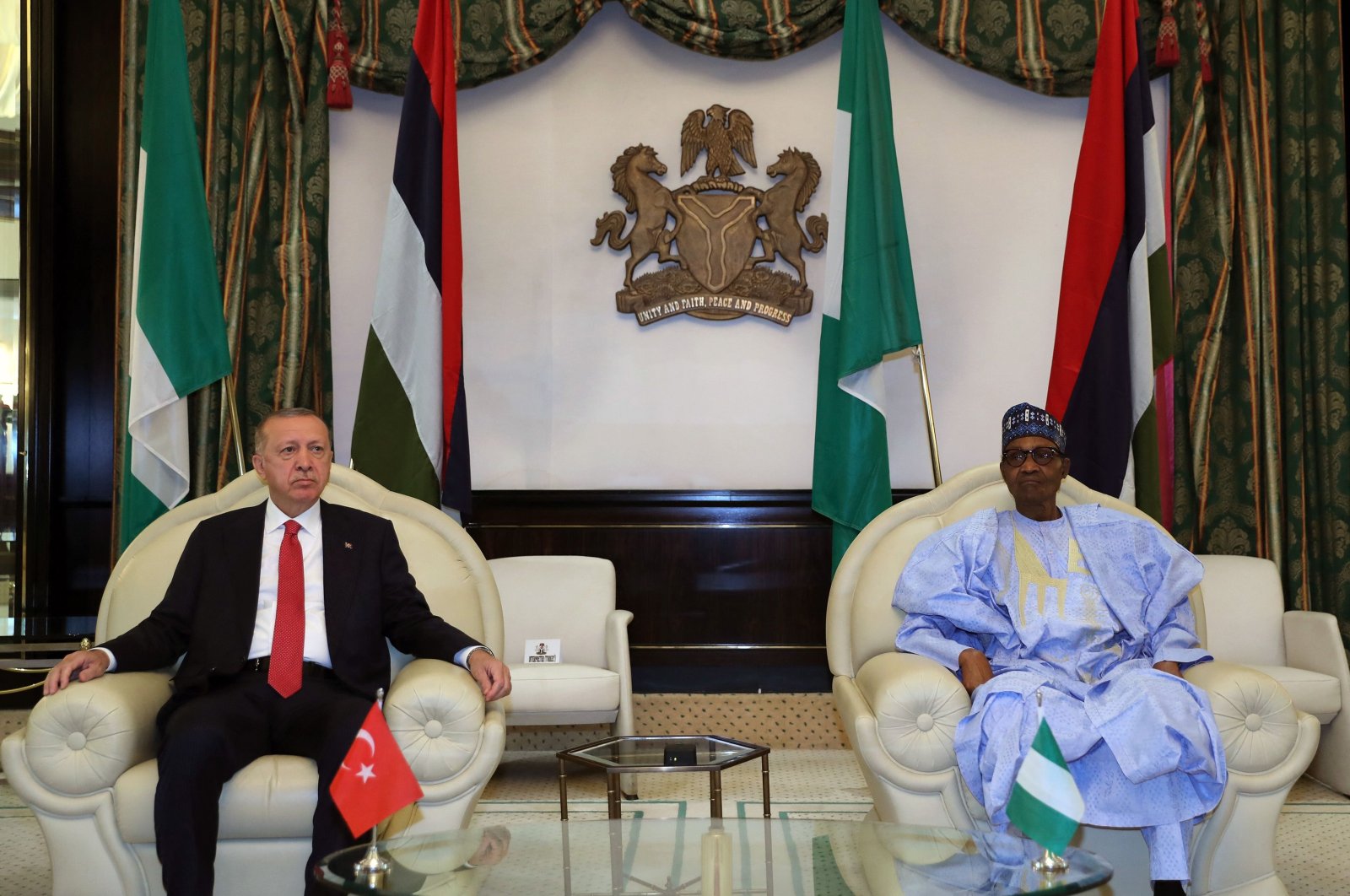 Turkey and Nigeria are determined to deepen their cooperation and partnership, President Recep Tayyip Erdoğan said Wednesday during his visit to the country's capital Abuja, the last leg of his mini-tour of three African countries in which the president also visited Angola and Togo. During his visit, the president also drew special attention to the importance of the common fight against terrorism.

Erdoğan was welcomed by his Nigerian counterpart Muhammadu Buhari with an official ceremony at the Aso Rock, the nation's presidential villa. Speaking at a joint press conference after one-on-one talks and delegation meetings, Erdoğan said that the two leaders discussed bilateral relations and opportunities for further cooperation.

The fight against the Gülenist Terror Group (FETÖ), the group behind the 2016 defeated coup in Turkey, was also discussed during the Turkish president's visit. This includes a request to transfer FETÖ schools that continue to operate in several parts of Nigeria to the Turkish Maarif Foundation.

"We continue to share necessary information with the Nigerian authorities about FETÖ's illegal activities in Nigeria," Erdoğan said.

Erdoğan also said that Turkey has been closely following the developments in Nigeria, and added that Turkey can offer support for Nigeria's fight against terrorism, underlining the importance of uniting under this aim.

"We are strengthening our cooperation on military defense and security issues with Nigeria, which is fighting against terrorist organizations, armed gangs and piracy," he added.

Seven agreements which encompassed fields like hydrocarbons, mining and energy were also signed during the visit.

Nigeria is Turkey's top trading partner in sub-Saharan Africa with a trading volume of $754 million (TL 7.03 billion) in 2020, which is expected to rise to more than $1 billion.

Erdoğan, who last paid an official visit to Nigeria in March 2016, hosted President Buhari at the Presidential Complex in October 2017. Erdoğan had told the Nigerian leader that Turkey was ready to seize all opportunities to activate the true potential of the economic relations between the two countries.

Erdoğan’s tour is seen as part of Turkey's policy to contribute to the economic and social development of the continent by encouraging peace and stability. The tour also serves as an opportunity to develop bilateral relations based on equal partnership and mutual benefit.

The president has officially visited 28 African countries to date and the trip was also Turkey's first official visit at the presidential level to Angola and Togo.

Many heads of state and government from African countries, ministers, high-level officials and representatives of regional and international organizations will attend the Turkey-Africa Partnership Summit, which Erdoğan will also attend. At the summit, within the framework of the Africa Partnership Policy, the steps to be taken in line with Turkey's goals of supporting the continent's development efforts and increasing commercial, cultural and human relations will be evaluated. The first Turkey-Africa Partnership Summit was held in 2008 and the second in 2014 in Equatorial Guinea.

Turkey's African policy, which encompasses political, humanitarian, economic and cultural spheres, is part of its multidimensional foreign policy. To this effect, the number of Turkish embassies in Africa has increased from just 12 in 2002 to 43 in 2021. Turkey's trade with Africa climbed to $25.3 billion by 2020 from just $5.4 billion at the end of 2003, despite the coronavirus pandemic.

Turkish Airlines offers flights to 60 different destinations across 39 African countries, while the Turkish International Cooperation and Development Agency (TIKA) has nearly 30 coordination centers in the continent. The Foreign Economic Relations Board (DEIK) has joint business councils with more than half of the nations in Africa.