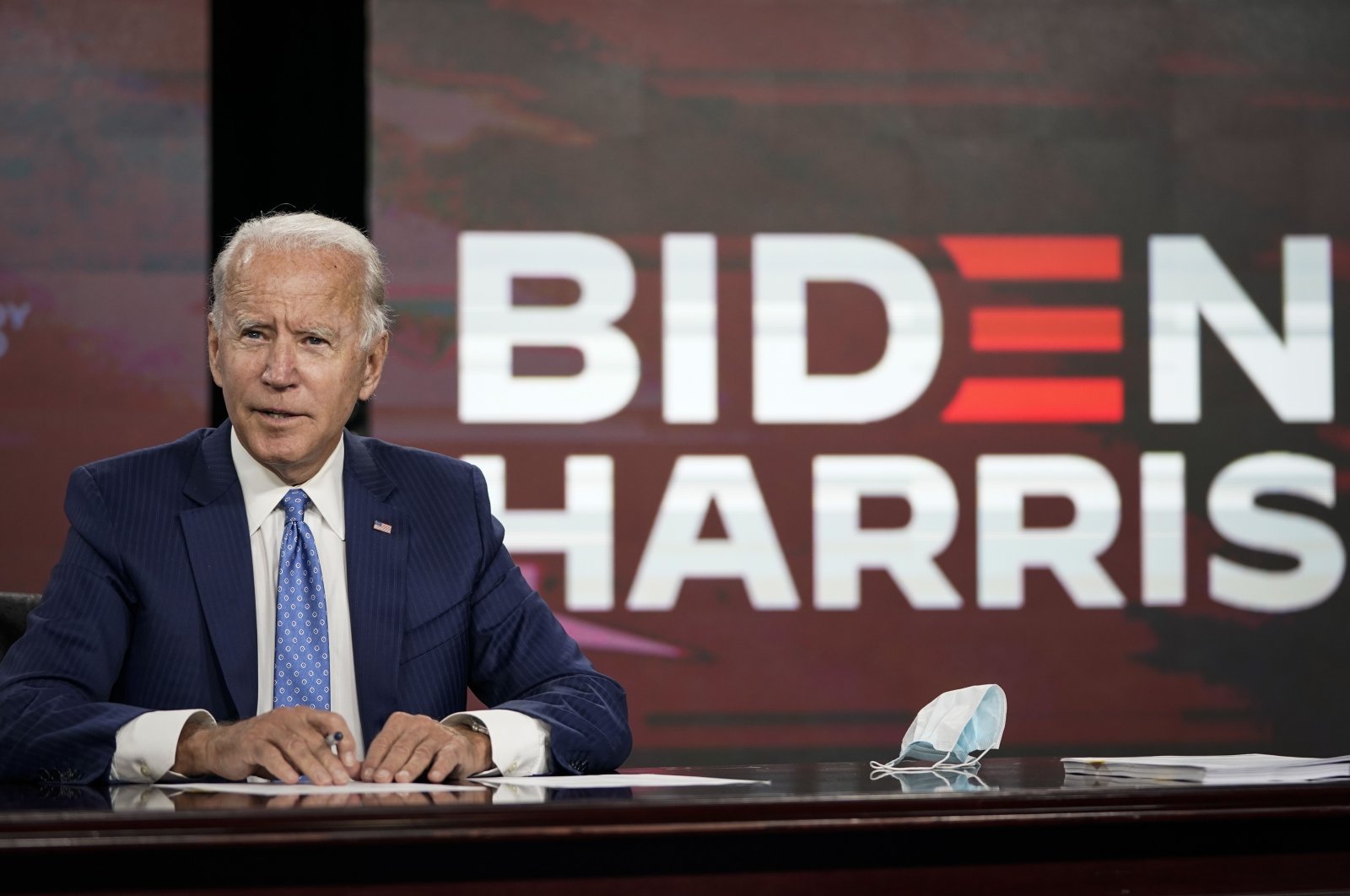 The past statements of Joe Biden, President Trump's main rival in the upcoming U.S. polls, are undemocratic and an attempt to interfere in Turkey's domestic politics, Turkish authorities highlighted

In a newly surfaced video, the current front-runner in the U.S. presidential race said he would seek a regime change in Turkey and expressed his willingness to work with "opposition leadership" in the country to topple President Recep Tayyip Erdoğan in Turkey's 2023 elections.

He added: "These remarks are not in line with democracy and the nature of Turkish-American relations."

While Biden and the Democratic Party have long accused Russia and other foreign powers like China and Iran of interfering in U.S. elections – and accused President Donald Trump of collusion with these efforts – Biden's remarks recorded last December seem to embrace the same tactics of interference in foreign elections, only this time for the U.S. to try to sway elections in Turkey.

In the video, recorded last December for the FX documentary series "The Weekly," Biden speaks with The New York Times editorial board, whose first foreign policy question to him incongruously does not concern such longtime adversaries as China, Russia or Iran but rather NATO ally Turkey.

Some 50 U.S. nuclear weapons based in Turkey "began to stir public debate after Turkey's offensive into Syria in October," she added, mischaracterizing Turkey's Operation Peace Spring, launched last fall to prevent the formation of a terrorist corridor on its southern borders and to liberate local Syrians from terrorist oppression.

"The answer is my comfort level is diminished a great deal. I've spent a lot of time with Erdoğan," Biden responded, going on to describe Turkey's democratically elected president as an "autocrat."

Biden added that if he is elected this November, his administration will pursue a policy of intervention against Turkey's elected government.

"What I think we should be doing is taking a very different approach to him (Erdoğan) now, making it clear that we support opposition leadership," said Biden.

"The analysis of Turkey by Joe Biden is based on pure ignorance, arrogance and hypocrisy. The days of ordering Turkey around are over," Kalın said on Twitter and added: "But if you still think you can try, be our guest. You will pay the price."

Similarly, Justice Minister Abdulhamit Gül said Turkey has never allowed and will not allow any "transoceanic interference" in its domestic politics.

"Sovereignty belongs to the nation. There is no power before the nation's will," Gül underlined.

Turkish Interior Ministry spokesperson Ismail Çataklı also commented on the interview Saturday and warned Biden not to consider Turkey as a colonial extension of the U.S.

During the two-term presidency of Barack Obama, whom Biden served as vice president, Turkey took strong exception to the U.S. policies of financing and arming YPG terrorists in northern Syria – whose mother terrorist group the PKK has taken some 40,000 lives – as well as refusing to extradite Fetullah Gülen, the U.S. resident and the so-called head of the Gülenist Terror Group (FETÖ), which carried out the defeated coup attempt in Turkey in July 2016.

Before the coup was defeated, FETÖ killed 251 people and wounded more than 2,200 in less than 12 hours on the night of July 15.

Lapsing into threats against a NATO partner, the 77-year-old presidential nominee continued to suggest interference and demonstrated a misunderstanding of Turkish politics.

Professing "concern," Biden said: "I'm still of the view that if we were to engage more directly like I was doing with them, that we can support those elements of the Turkish leadership that still exist and get more from them and embolden them to be able to take on and defeat Erdoğan. Not by a coup, not by a coup, but by the electoral process."

Trump "yielded" to Turkey, said Biden, adding: "And the last thing I would've done is yielded to him with regard to the Kurds. The absolute last thing." Biden's remarks illicitly conflated "Kurds" with the terrorist group PKK/YPG in northern Syria, a group that attacks Turkish security forces, kidnaps children, including many Kurds, and has tried to set up a terrorist statelet along Turkey's borders.

He continued: "They got to understand that we're not going to continue to play with them the way we have. So I am very concerned. I'm very concerned about our airfields and access to them as well."

"And I think it takes an awful lot of work for us to be able to get together with our allies in the region and deal with how we isolate his actions in the region, particularly in the Eastern Mediterranean in relating to oil and a whole range of other things which take too long to go into. But the answer is yes, I'm worried," he said.

Senior members of Turkish opposition also lashed out at Biden.

The head of the Nationalist Movement Party (MHP), Devlet Bahçeli, labeled Biden’s remarks as “corrupt,” and stated that such words reveal who was behind previous coups and coup attempts in Turkey.

Bahçeli also said that the statement came from a place of “pure hatred” against Turkey, and he called on the “opposition groups” that Biden referred to in his speech to be revealed since the presidential candidate hinted at cooperating with them.

The head of the CHP, Kemal Kılıçdaroğlu, also stated that as the main opposition Republican People's Party (CHP), their only aim is to fight for the independence of Turkey and thus, it is unacceptable to accept “the shadow of an imperialist power.”

Faik Öztrak, the spokesperson of the CHP, criticized Biden's remarks, saying: "Our democracy and endeavor for freedom do not need any imperialist favors. Independence is our character."

He assured that the opposition would do politics for the sake of the Turkish nation, not of foreign political actors.

Gürsel Tekin, a senior CHP lawmaker from Istanbul, on the other hand, tagged Biden in a tweet and said his party "does not need, want or accept any foreign aid to win an election. As (the founding father of the Republic of Turkey Mustafa Kemal) Atatürk said: 'Independence is our character.' Every political actor including the U.S. must respect the sovereignty and independence of the Turkish nation.”

Temel Karamollaoğlu, head of the opposition Felicity Party (SP), slammed Biden's remarks in a written statement and said his party would not let any foreign actors design the domestic politics of Turkey.

"We have knowledge and experience to deal with problems on our own no matter how big they are," he said. "Worldwide peace will never be achieved unless the U.S. stops meddling in national politics of others," he stated, adding that the current front-runner in the U.S. presidential race should focus on the problems in his own country.

Muharrem Ince, who ran for president in 2018 as the Republican People's Party (CHP) candidate, was among those who slammed Biden's remarks.

"As Atatürk said: INDEPENDENCE is our character! Changing the Turkish government is the responsibility of the Turkish nation, not yours! @JoeBiden," he said on Twitter.

Democracy and Progress Party (DEVA) leader Ali Babacan said Turkish democracy was powered by its nation, and political parties did not need any external support to gain electoral success.

Ahmet Davutoğlu, leader of the Future Party (GP) who previously served as the country's prime minister, also took to Twitter to voice criticism and said the Turkish nation was the only actor to decide who would govern the country and that his party did not recognize any other power than the will of the Turkish nation.

Biden's remarks flirting with hawkish U.S. imperialism set off a firestorm of criticism not only from Turkey but also across the world.

On the controversial remarks, Bruno Macaes, a senior fellow at the U.S.-based Hudson Institute, said, "Biden knows nothing on Turkey" and that his misunderstanding of Turkish politics would earn "an F in a seminar."