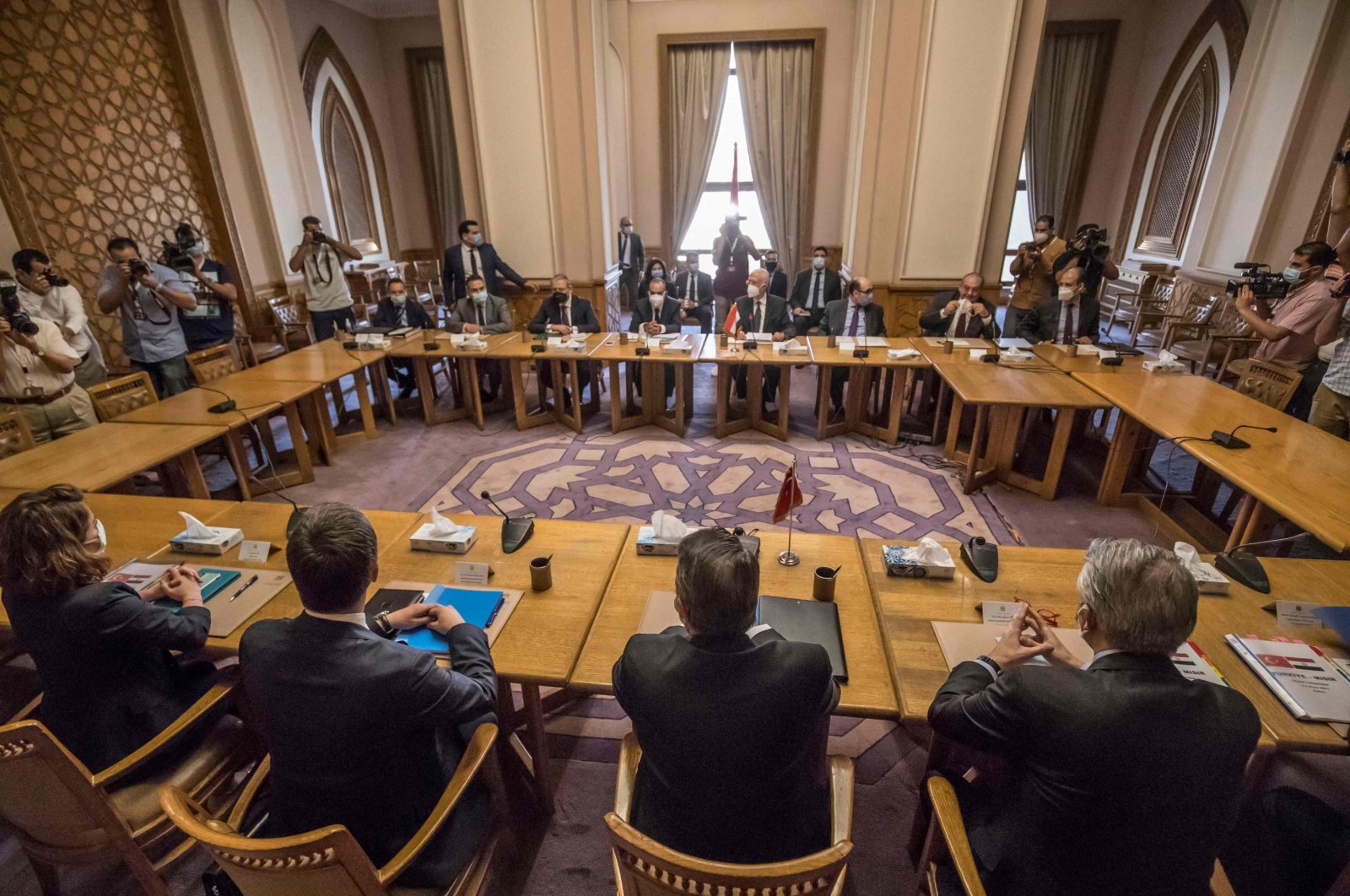 Foreign Minister Mevlüt Çavuşoğlu said Tuesday there was a positive momentum in Turkey's discussions with the United Arab Emirates (UAE) to end a yearslong rift as well as with Egypt, with which Turkey is currently holding diplomatic talks in the Turkish capital.

The regional rivals have held a series of contacts in recent weeks to ease tensions that fueled conflicts including Libya's war. While political differences remain, they are expected to focus on building economic ties and de-escalating their rift.

Çavuşoğlu told broadcaster NTV that ties between the two countries could be normalized if there are reciprocal steps and conditions are right.

A truce between Turkey and the UAE has calmed tensions that fueled conflicts including Libya's war, officials and diplomats say, after years of animosity and insults.

But with political differences still running deep, the two countries are expected to focus on building economic ties and de-escalating, rather than resolving, an ideological rift that has drawn a fault line through the Middle East.

Erdoğan, who a year ago said Turkey could cut diplomatic relations with Abu Dhabi after it set up ties with Israel, also discussed UAE investment in Turkey with Abu Dhabi's national security adviser.

"The UAE is interested in exploring prospects of reinforcing ties," an Emirati official told Reuters, pointing to trade and investment opportunities in transportation, health and energy.

"It's going very fast," said a diplomat in the Gulf. "Faster than many people thought it would. They have turned the page."

A senior Turkish official described Erdoğan's call last week with Sheikh Mohammed as a significant move toward overcoming disputes which have plagued their relations, saying the two countries could work together in the Middle East.

"But first there will be steps taken in terms of the economy," the official said. Other issues "are not agreed, but a desire was formed (to tackle) the large part of these problems."

The rift between the two countries stems from the Arab Uprisings, regional rivalry including in Libya as well as Turkey backing Qatar in a Gulf dispute, putting it at odds with the UAE, Saudi Arabia and Egypt. In Libya, Turkish support last year helped Libya's United Nations-backed government drive back UAE-supported forces trying to seize the capital. Also in Somalia, Turkey and the UAE have competed for influence. In Syria, Turkey still rejects Bashar Assad while the UAE, has opened an embassy in Damascus.

Turkish officials and Gulf diplomats say both countries recognize their geopolitical tensions came at an economic price, heightened by the COVID-19 pandemic. Although no agreement has been announced on investments, the two countries already have an economic platform to build on.

Meanwhile, Turkey and Egypt are holding the second round of diplomatic talks in the capital Ankara on Tuesday.

Çavuşoğlu reminded that a Turkish delegation traveled to Egypt before and said: “Our friends are holding talks at the ministry. If we decide after talks, we may take the necessary steps to appoint mutual ambassadors.”

He also said that negotiations may start regarding maritime zones in the Eastern Mediterranean if the Egyptian side wants. "They (Egypt) will make more gains if they make an agreement with us."

Earlier this year, Turkey said it had resumed diplomatic contact with Egypt and wanted to improve cooperation after years of tensions that began with the disruption of relations in 2013. On April 15, Turkish Foreign Minister Mevlüt Çavuşoğlu announced in a live broadcast that it was agreed that the channel first opened between Turkish and Egyptian intelligence would continue through the countries' foreign ministries. Çavuşoğlu said Egypt had invited the Turkish side for a visit in early May. After an inter-delegation meeting, Çavuşoğlu expressed his willingness to meet with his Egyptian counterpart as well.

Journalist Mustafa Özcan told Anadolu Agency (AA) that both countries put forth a will to restore relations and that relations improve though slowly.

Özcan underlined that Turkey is neighboring the Arab world and that Turkey and Egypt have common areas of interest in Libya, North Africa, Syria and Iraq.

On the other side, Egyptian journalist Saliha Allam said that Cairo and Ankara know the importance of improving relations.

“General interests and developments in the international arena are forcing both countries to postpone their disagreements and act together in some issues. Egypt needs Turkey in some regional issues just as Turkey needs Egypt in some files,” Allam said, adding that although both countries may not overcome disagreements regarding the Muslim Brotherhood, the issues of Libya and the Eastern Mediterranean have priority.

Muhammed Zevavi of the Sakarya University said that new alliances in the region influence Ankara-Cairo ties and pointed to rifts between Saudi Arabia and the UAE.

Zevavi also said that both countries could make an agreement on maritime zones in the Eastern Mediterranean.

“This agreement would disturb Greece, the Greek Cypriot administration, Israel and France.”