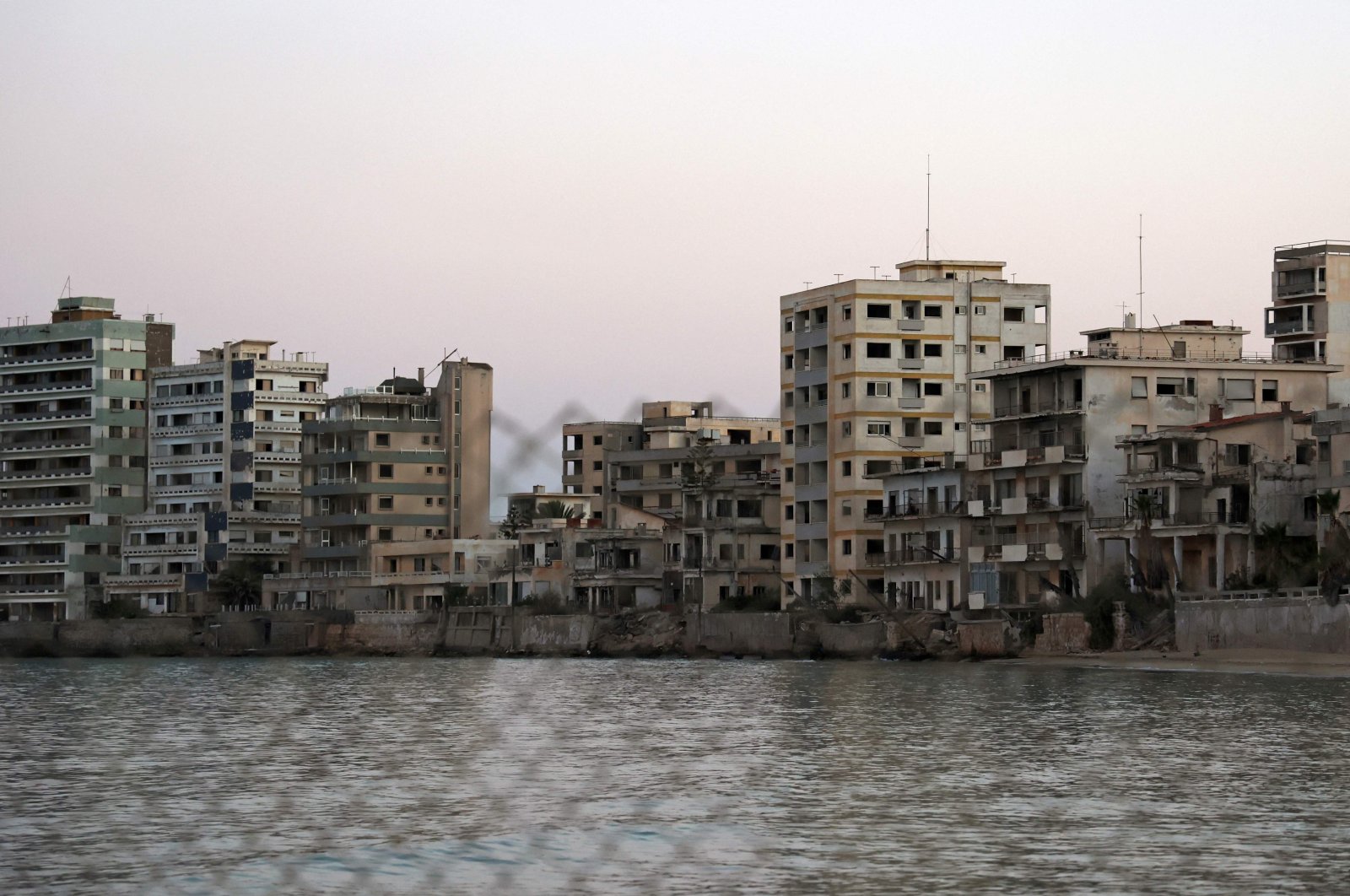 A view shows abandoned buildings and hotels in the fenced-off area of Varosha in the town of Famagusta in the Turkish Republic of Northern Cyprus (TRNC) of the divided Mediterranean island of Cyprus, July 16, 2021. (AFP Photo)
by DAILY SABAH Jul 18, 2021 1:35 pm

President Recep Tayyip Erdoğan is set to start a two-day official visit to the Turkish Republic of Northern Cyprus (TRNC) on Monday to mark the 47th anniversary of Turkey's 1974 Peace Operation, which protected the island's Turkish Cypriot community from Greek Cypriot violence.

During his visit, Erdoğan will address a special session of the Turkish Cypriot Parliament and attend July 20 Peace and Freedom Day celebrations. He also will meet with Turkish Cypriot President Ersin Tatar to exchange views on the latest developments in the Eastern Mediterranean and bilateral relations.

With Cyprus as a key actor, the Eastern Mediterranean has been one of the main issues of dispute between Turkey, the EU and Greek Cypriots last year.

Turkish leaders have repeatedly stressed that Ankara favors resolving all outstanding problems in the region through international law, good neighborly relations, dialogue and negotiation. Turkey has also criticized the EU’s stance on the Eastern Mediterranean conflict, calling on the bloc to adopt a fair attitude regarding the dispute and give up favoring Greece under the pretext of EU solidarity.

Erdoğan will also attend a mass inauguration ceremony of some completed projects.

Every year the TRNC celebrates July 20 as its Peace and Freedom Day to mark the operation, a large-scale military intervention to protect Turkish Cypriots from the violence that struck the island in 1974.

In 1974, following a coup aiming to prevent Cyprus' annexation by Greece, Ankara was forced to intervene as a guarantor. The island has since been divided into a Turkish Cypriot government in the north and a Greek Cypriot administration in the south. In 1983, the TRNC was founded.

The Peace Operation, which was Turkey's first independent military venture abroad in the Republican era, followed two decades of intercommunal violence that saw Turkish Cypriots targeted by Greek Cypriot pro-independence militias during the British colonial rule and after independence. In response, Turkish Cypriots were confined to certain enclaves to protect themselves from ongoing violence.

The chain of events that set the stage for Turkey's Cyprus Peace Operation in 1974 has its roots in the mid-1950s, when Ethniki Organosis Kyprion Agoniston (EOKA), a terrorist group seeking "Enosis" (the annexation of islands in favor of Greece), started oppressing and killing local Turkish Cypriots.

Turkish Cypriots were marginalized by Greek Cypriots at state institutions and systematically oppressed as of Dec. 21, 1963, when a night of mass violence, later termed "Bloody Christmas," took place.

The "Bloody Christmas" incidents gave birth to the partition of the central city of Nicosia on Dec. 27, 1963. This partition line is today known as the "Green Line."

Erdoğan’s visit has caused tensions in Greece and the Greek Cypriot side as it is expected that the president might also visit Maraş (Varosha), which was partly restored to public access last year.

Varosha – once the playground of celebrities and dubbed a "Jewel of the Mediterranean" – was left a fenced-off ghost town, where former luxury hotels have become overgrown by weeds.

The city of Varosha is protected by a 1984 United Nations Security Council (UNSC) resolution, stating that the empty town can only be resettled by its original inhabitants. If the Greek Cypriots had accepted the U.N.'s 2004 Cyprus reunification plan, the Annan Plan, Varosha would now be back under Greek Cypriot control and its residents back in their homes. Despite this, most Greek Cypriots voted against the plan, whereas the Turkish Cypriots voted for it.

No common ground yet

In April, a U.N. summit in Geneva failed to broker a deal to start a new round of talks.

In efforts to solve the Cyprus dispute, the proper place for the Greek Cypriot administration to address itself is the neighboring Turkish Cypriot state, not Turkey, said the TRNC presidency on Saturday.

"The Greek side's effort to address Turkey is a reflection that they see themselves as the sole sovereign of Cyprus and (see) the Turkish Cypriot people as a minority subject to the illegitimate so-called ‘Republic of Cyprus' under their occupation, and this is the main reason why the Cyprus problem cannot be resolved," said a presidential statement.

The statement came in response to Greek Cypriot leader Nicos Anastasiades' remarks saying the Greek side "will not accept any preconditions put forward by Turkey" for dialogue.

The Turkish Cypriot presidency added: "A solution and reconciliation in Cyprus can be achieved as a result of official negotiations to be held upon the parties' respect for each other's acquired/existing rights, their acceptance and implementation," it added.

The statement said the Turkish Cypriot side would continue to do what is necessary to protect its "sovereign equal rights" as long as the Greek Cypriot side continues to falsely claim that it represents the entire island.

The presidency also rebuffed a claim by Anastasiades stating that there is common ground for the talks to resume saying: "UN Secretary-General Guterres, in his statement at the end of the 5+UN informal meetings held in Geneva on April 29, 2021, said that there was not ‘sufficient common ground,' but he will continue his efforts."

"Despite this statement, Mr. Anastasiades' statement that the necessary common ground exists is in contradiction with the statement of the Secretary-General and is, to say the least, a deception," it added.

The presidency added that the principles of sovereign equality and equal international status that it has expressed are not a prerequisite but our "equal inherent rights."

"The Turkish Cypriot side has all the rights claimed and used by the Greek Cypriot side. This includes the right to be a separate, independent and sovereign State," it added.

It decried how the Greek Cypriot side tries to illicitly usurp the title of "Republic of Cyprus" for itself over the whole island.

"This title, devoid of any legal, political or de facto basis, is currently the biggest obstacle to negotiations. It is out of the question for the Turkish Cypriot side to accept this precondition," it added.