Protests in Ankara for Kosovo's move to open embassy in Jerusalem 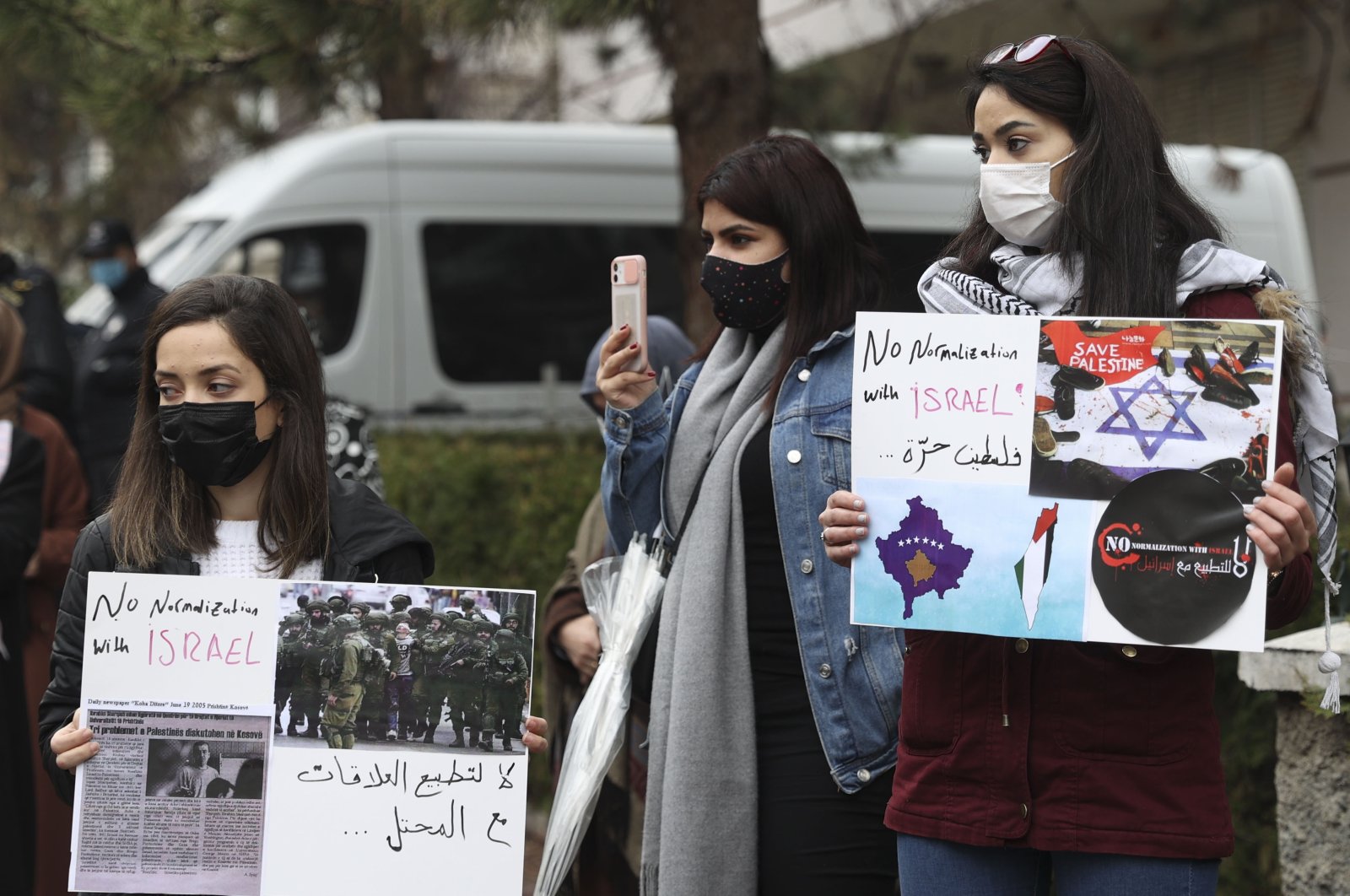 Representatives from non-governmental organizations (NGOs), including the Humanitarian Relief Organization (IHH) and the Memur-Sen Trade Union, protest the Republic of Kosovo opening an embassy in Jerusalem, in front of the Kosovo Embassy in Ankara, Turkey, March 23, 2021. (AA)
by Anadolu Agency
Mar 23, 2021 3:12 pm

Dozens of protestors rallied in front of Kosovo's embassy in the Turkish capital Ankara on Tuesday. They were showing resentment against Kosovo’s move to open its embassy in Jerusalem.

The protest, organized by the Humanitarian Relief Organization (IHH) and the Memur-Sen Trade Union, was attended by Turkish activists and Arab students.

“We believe that Kosovo’s move to open an embassy in Jerusalem will go down as a black mark in history,” Zahid Şengül, a leading figure of Memur-Sen, said in a press statement.

The statement also urged the leaders of Kosovo to reverse their decision.

“Just as we had defended Kosovo at the cost of our lives during its war of independence, we will stand up for the state of Palestine languishing under Israeli occupation,” the statement read.

Speaking to Anadolu Agency, Şengül said they will not end the struggle till Palestinians are granted their rights.

“We will continue our struggle until the Zionist invaders leave Palestinian lands, including Jerusalem,” he said.

Huthaifa Yassin, an Ankara-based Palestinian student, said he is taking part in the protest to voice his “outrage” over the Kosovo move.

“Jerusalem was and is still the capital of Palestine and Israelis have no right there,” he added.

Jordanian student Jilan Abu al-Rub, who was also part of the protest, said she was there to express strong condemnation against Kosovo's move.

"Our position represents every free person in this globe which is rejecting the Israeli attacks and discrimination practiced by the apartheid state of Israel against the Palestinian people,” she said.

In a controversial move, Kosovo on March 14 announced the opening of its embassy to Israel in Jerusalem.

Turkey had condemned the Kosovo decision.

The city of Jerusalem remains at the heart of the decades-long Mideast conflict, with Palestinians insisting that East Jerusalem – illegally occupied by Israel since 1967 – should serve as the capital of the Palestinian state.

For two years, Israel has been convincing countries to move their embassies from Tel Aviv to Jerusalem.

European Union member states have refused to do so pending a final agreement between the Israelis and Palestinians on the issue of the holy city.

Among European Union states, only Hungary opened a diplomatic office in Jerusalem.

Except for the U.S. and Guatemala, countries worldwide have so far declined to shift their embassies from Tel Aviv to Jerusalem.