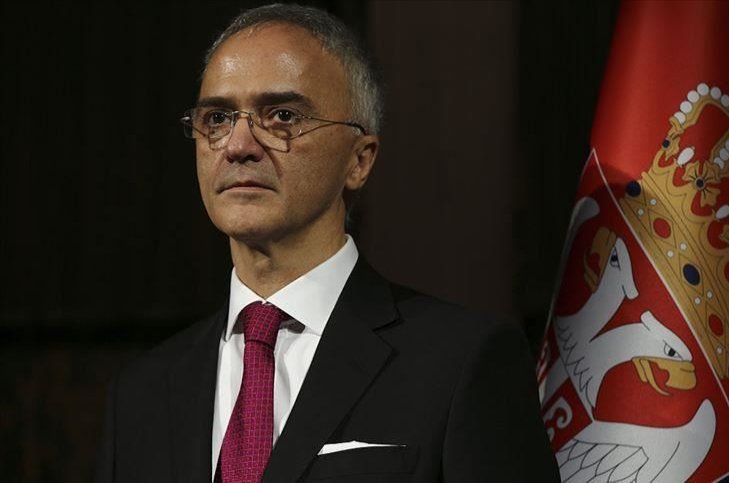 The Serbian ambassador to Ankara on Wednesday expressed his gratitude to Turkey for sending medical aid to fight against the novel coronavirus, and said the country entered the pandemic "well-prepared."

Speaking to Anadolu Agency (AA), Ambassador Zoran Markovic said, "We are particularly grateful to Turkey for the aid in diagnostic and protective equipment provided to us, as to a number of other countries in need."

Markovic also thanked Ankara "for prompt replies to facilitation requests for repatriation of our citizens, some of them traveling from further abroad and having been stranded on their return home."

Aside from the solidarity between Turkey and Serbia, the Serbian envoy also addressed the latest updates regarding the COVID-19 pandemic in his country.

He said the latest number of diagnosed positive cases in Serbia stands at 6,890, while there have are 977 recovered patients and 130 fatalities.

"Although medicine is not my field of expertise and it is still too early to give estimates on the pandemic peak, it can be said that the number of positive diagnoses has been steady over the last week, with a slight drop in the rate of infections, now standing at about 10% of the total tests being administered daily," Markovic further noted.

Underscoring that the rate of deaths is on the decline, falling below 2% for the first time, Markovic said the general situation in the country "seems positive" and that the measures Serbia is implementing gave "rise to cautious optimism on the possibility of a slight relaxation of the curfew regime in the near future."

Markovic continued by praising Turkey's efforts in curbing the spread of the pandemic. "Turkey seems to have entered the global health crisis well prepared, with a sound health care system and adequate stocks and resources to handle the initial challenge," he said.

"Furthermore, a commendable public attitude and a mature general response of the population to the calls of President (Recep Tayyip) Erdoğan and the leadership for social distancing measures have greatly helped curb the risk of a much greater outbreak," Markovic added.

Commenting on the solidarity between the two countries, Markovic said: "The cooperation of Turkey and Serbia in fighting the heinous pandemic, as in many other fields, has been open, consistently strong and mutually beneficial, in keeping with the sincere and cordial relations between our two nations and in the best interest of defeating our common invisible enemy."

Defining the Turkey-Serbia relations as "excellent" and "the best in recent history," Markovic stressed that the two countries' relations can "clear the way of any obstacles that may surface."

He also recalled President Erdoğan's statement underscoring that the fight against coronavirus is a global issue. "The Republic of Serbia shares this view. Yes, we are a small country, and we are not the ones making global decisions, but we share in and support joint efforts to eradicate the pandemic," he said.

"It is absolutely clear that it is impossible for a single country to overcome a disease while being surrounded by others still fighting it," he added.

Continuing by saying that everyone close to him, including his family back in Belgrade, is healthy, Markovic said they are spending their days in Ankara "in line with the officially proclaimed health regulations and advice of the experts, respecting all measures and implementing social distancing guidelines at work and outside."

Hoping for a light at the end of the tunnel, the Serbian envoy said: "It is certain that this scourge, no matter how tough and challenging, will be beaten like many before it. And although much still remains unknown, it is important that we all keep a positive outlook and invest our best efforts to respect all recommendations of experts."

Similar to many others, Markovic also drew attention to how the pandemic changes lives. "Diplomacy, as we have known it until now, has been transformed completely, with even some good things that we had to learn on the way," he said.

"Old-fashioned diplomacy already wasn't functional for a while. We live in a dynamic world, one that requires quick actions and reactions," he said.

He ended his statements by noting: "Many aspects of human life, including politics, will not be the same as we have known them before. We should keep in mind that situations, like we are facing today occur once in 100 years."

The novel coronavirus has spread to 185 countries and regions since emerging in Wuhan, China last December, with the U.S. and Europe being the hardest hit.

More than 2.58 million cases have been reported worldwide, with the death toll over 178,000 and some 687,000 recoveries, according to data compiled by the U.S.' Johns Hopkins University.