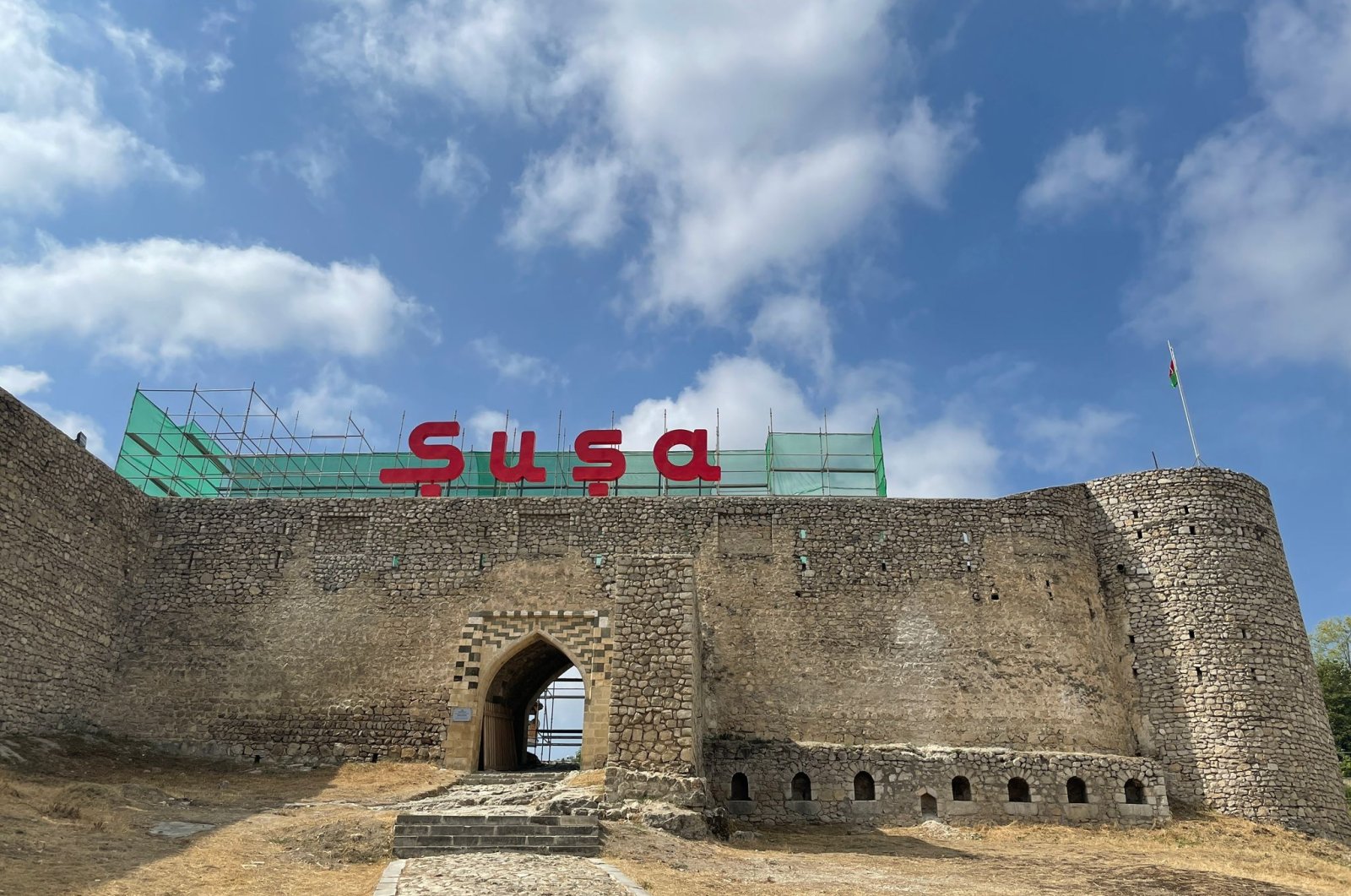 After nearly three decades of Armenian occupation, Azerbaijan's city of Shusha – once known as the Pearl of Karabakh – is ready to welcome back its former residents as the traces of the destructive occupation are erased.

The Azerbaijani military launched the operation on Sept. 27, 2020, and it was over by Nov. 10, 2020. Shusha was a clear reflection of the impact of the occupation, with many of its buildings uninhabitable. The city that was once known as the Pearl of Karabakh was referred to as a ghost town after the occupation.

It has been reported that rebuilding efforts have begun, roads have been constructed and police and soldiers, along with their families, have settled in Shusha. With nearly 20% of Karabakh under construction, those with homes in Shusha are expected to begin returning soon.

As Azerbaijani authorities take inventory of the damage done to the city's historical buildings, the military has been clearing mines and improvised explosives planted by Armenians. Azerbaijan aims to restore and renovate the buildings and monuments once full inventory has been taken. The city's historical church, which had been damaged in bombing and shelling, is also being renovated.

During the occupation, the Armenian forces destroyed many historical monuments in Shusha. President Recep Tayyip Erdoğan and Azerbaijani President Ilham Aliyev signed the "Shusha Declaration" between the two countries on June 15, 202 at a palace that had also been visibly damaged. Moreover, Armenia demolished 15 of the 17 mosques in the occupied Nagorno-Karabakh.

Now, former residents of Shusha have the opportunity to return to their homelands after nearly three decades of occupation.

Ekber Goşala is among those who returned to the city after 30 years. "It is our first time in 30 years. Shusha is our city and cultural capital that does not leave us even if we leave. Being at the place where the Azerbaijan and Turkey interstate declaration was signed gives Shusha a different meaning. We have no Shusha other than Shusha. It is good that our cultural capital is freed from the occupation and reintroduced not only to Azerbaijan but also to the Turkish world and to humanity and culture. The Armenians turned the city of Shusha into hell because it was not theirs. A person does not make or destroy his own home and city like this. This is a war-torn city."

Cemile Elekberova echoed that Shusha's original inhabitants will soon come back to the region. "I came to Shusha for the first time after liberation from the occupation. The danger of mines continues in Shusha. After the mine clearance is over, our Azerbaijani brothers will come to Shusha. The houses of Azerbaijanis stand in Shusha. I met an 11-year-old brother living in Shusha and asked him, 'Have you seen your own house?' First, he went to look at his own home. After the occupation of Shusha by Armenia in 1992, we did not see any change in our houses, our title deeds remain. They destroyed some of our homes. The people of Shusha will soon return to their homes."

Akşin Guluyev, who resettled in Shusha, said: "My grandfather was residing in Shusha before the occupation. My father lives here. Our origin was in Shusha. After the end of the occupation, I now live in Shusha. On top of the mountains, on the top of the rock, Shusha. Recep Tayyip Erdoğan is very popular in Shusha, his activities in our country are very supported. Erdoğan also has a lot of sympathy and affection for our country. We also love Erdoğan very much. We are one nation, two states. Azerbaijan-Turkey brotherhood will never be shaken."

Erdoğan in June visited the symbolic city of Shusha and other liberated areas in a show of solidarity and reflection of the strong historical ties between the two countries. On that historic visit, Turkey and Azerbaijan signed a memorandum of alliance to carry relations further in several fields.

Erdoğan was the first leader to visit the historic city following its liberation by the Azerbaijani Armed Forces in November last year. It had been occupied by Armenia on May 8, 1992, spanning 28 years.

The town has significant military value since it is located on strategic high ground about 10 kilometers (6 miles) south of the region’s capital Stepanakert (Khankendi) and on the road linking the city with Armenian territory. Besides its strategic importance, the town is seen as an emblem of Azerbaijani history and culture due to its many historic sites, which are currently being restored. Many prominent Azerbaijani musicians and scholars were born in the city.

Fresh clashes erupted between Azerbaijan and Armenia on Sept. 27. The Armenian military maintained its attacks on civilians and Azerbaijani forces for 44 days, even violating two humanitarian cease-fire agreements. Relations between the former Soviet republics have been tense since 1991 when the Armenian military occupied Nagorno-Karabakh, a territory recognized as part of Azerbaijan.

Azerbaijan seized back swaths of its Armenian-occupied territory last year in the conflict that erupted in Nagorno-Karabakh. The conflict claimed 6,000 lives and ended with a Russian-brokered truce in November 2020.

According to the deal, all transportation lines that were closed due to the Karabakh issue were to reopen. With the opening of new transportation lines, the rebuilding of liberated cities and the restoration of historical monuments, Azerbaijan intends to transform the region into an economic and tourism hub.

Meeting two months after a cease-fire was declared for the Caucasus' Nagorno-Karabakh region, the leaders of Russia, Azerbaijan and Armenia signed a pact to develop economic ties and infrastructure to benefit the entire region. While the Karabakh truce has largely held, the border region has witnessed several skirmishes.

Erdoğan has frequently called for a six-nation platform comprising of Turkey, Russia, Iran, Azerbaijan, Georgia and Armenia for permanent peace, stability and cooperation in the region.

Now, work is underway to clear the retaken territories of land mines, repair infrastructure destroyed in the fighting and work on transit routes for the region that have been paralyzed for nearly three decades amid the conflict.