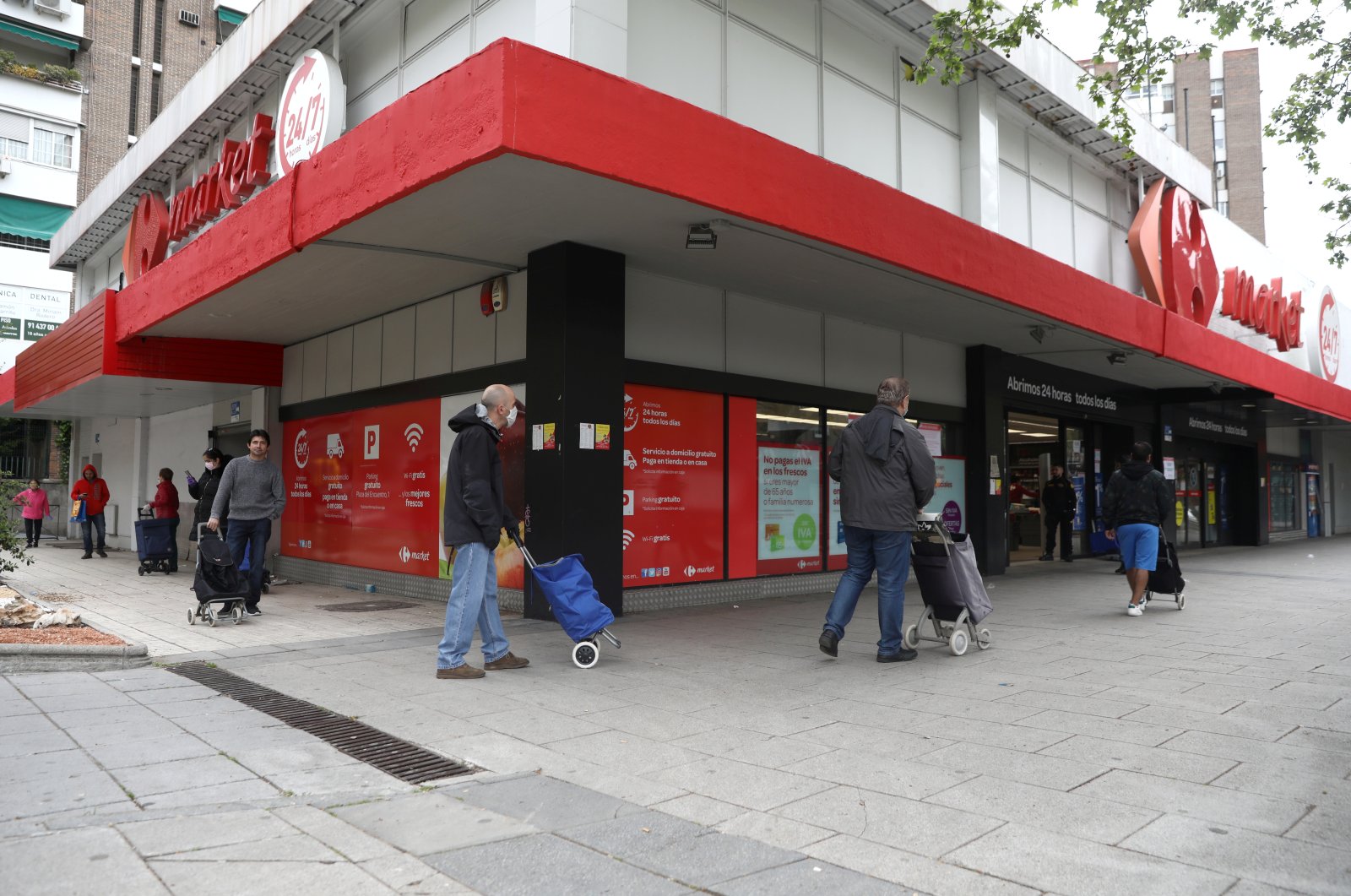 People maintain social distance as they queue outside a supermarket amid the coronavirus outbreak in Madrid, Spain, April 9, 2020. (Reuters Photo)
by DAILY SABAH WITH AA Apr 09, 2020 1:22 pm
RECOMMENDED

"Respirators from Turkey are already in Spain. Unloading at the Barajas Airport," the Foreign Ministry said on Twitter while it shared images of a Turkish flagged plane with cargo.

Earlier in the day, the ministry also announced "150 ventilators from Turkey are already on the way, arriving tonight in Spain and to be delivered, as planned, to their final destinations, Castilla y La Mancha and Navarra" autonomous regions.

Although the claims were denied by the Spanish Ministry with an early Saturday statement, Spanish Foreign Minister Arancha Gonzalez Laya and her Turkish counterpart Mevlüt Çavuşoğlu rejected all claims later on Saturday in separate televised speeches, confirming the authorization of the medical supply.

“Thank you #Turkey @MevlutCavusoglu 4 authorizing the export of Turkish respirators bought by two of our Autonomous Communities Navarra & CastillaLaMancha in view of the urgency in we appreciate the gesture of a friend & ally,” Laya said on Twitter.

Talking to local television Cuatro a few minutes before her tweet, Gonzalez Laya said she "strongly" rejects all "unfair" and "inaccurate" accusations against Turkey, criticizing remarks of the opposition parties and media reports.

"It should be known that such statements used by the press, political parties and the public are harming our bilateral relations (with Turkey)," she added.

Çavuşoğlu shared a message on Twitter on Saturday. “Will always stand by friendly Spain. Will overcome these difficult times together,” he wrote.

"Confiscating (medical) products is an ugly accusation,” Çavuşoğlu also said in a live broadcast and added that the Spanish Foreign Ministry corrected reports as well.

"We have authorized (export of) 116 ventilators to Spain following the instructions of the Health Ministry, and they will be sent to Spain in the coming days," he added.

The 3 million euros (TL 21.9 million) in medical aid purchased by Castilla y La Mancha and Navarra from a Turkish company was delayed due to restrictions on exports of medical supplies in Turkey that wanted all equipment to combat coronavirus inside the country.

After originating in China last December, the virus known as COVID-19 has spread to at least 184 countries and regions across the world, with its epicenter shifting to Europe.

The pandemic has killed nearly 87,000, and infected more than 1.47 million, while more than 317,300 patients have recovered, according to figures collated by the U.S.-based Johns Hopkins University.

Meanwhile, in Spain, more than 14,600 deaths and almost 147,000 cases have been recorded, while an excess of 48,000 patients recovered. The country stands second in the world for having the highest number of coronavirus-related cases and fatalities.