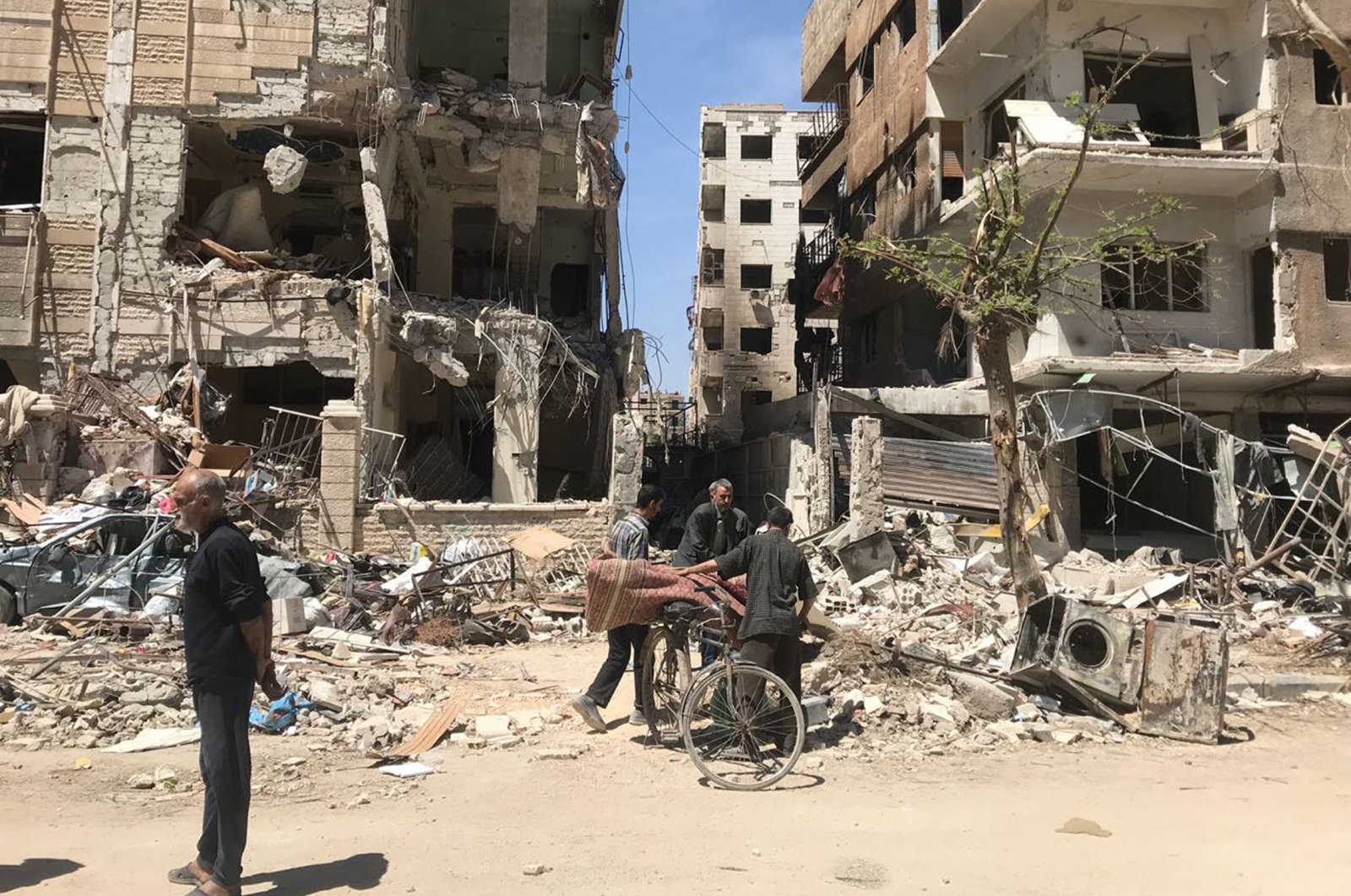 People stand in front of damaged buildings, in the town of Douma, the site of a suspected chemical weapons attack, near Damascus, Syria, April 16, 2018. (AP Photo)
by DAILY SABAH WITH AA Apr 15, 2020 1:13 pm
RECOMMENDED

A Syrian activist, who witnessed the Bashar Assad regime's chemical attacks on the Hama province, said people still hope to hold the regime accountable for those attacks in the town of Ltamenah in March 2017.

Mahmud Hamawi, who has archived the attacks of the Assad regime and his allies since the beginning of the civil war, spoke to Anadolu Agency (AA) following a recent report released by the Organization for the Prohibition of Chemical Weapons (OPCW) which confirmed that the Assad regime used sarin and chlorine in its airstrike on Ltamenah.

Ltamenah town was targeted by over 9,000 regime and Russian airstrikes, 3,500 of which used barrel bombs, and 18 used chemical weapons, according to Hamawi.

"(On March 25, 2017) Ltamenah hospital was the target of the attacks. Two barrel bombs dropped in front of the hospital. One of them did not explode. The other contained sarin gas. The smell of the gas surrounded the hospital, killing surgeon Ali Darwish and affected more than 20 civilians," Hamawi said.

The activist pointed out that another chemical attack took place on March 30 in southern Ltamenah.

"Helicopters and warplanes of the regime were launching attacks. A SU-22 regime warplane took off from the Shayrat military airport in Homs province and dropped a bomb loaded with sarin gas. In the beginning, only 10-20 people were affected by the attack. Later this number reached 70, and then 100," he said.

The Assad regime, Hamawi said, is still not held accountable. "We presented the evidence and soil samples we gathered, many examples, proofs and videos were sent to concerned authorities."

"Testimonies of eyewitnesses were sent to the OPCW," he said. "Ltamenah people are not hopeful that criminals and murderers will be brought to justice."

"Even the U.N. Security Council has not even been able to publish a condemnation report on all the massacres against civilians," Hamawi stressed.

Stating that it is very natural for the Assad regime to reject the report of the OPCW, Hamawi asserted that the regime killed more than 1,500 civilians only in Ltamenah, which it denies.

Released on April 8, the OPCW report for the first time blamed the Assad regime for using chemical weapons in Ltamenah.

The report from the OPCW said Syrian regime air force pilots flying Sukhoi Su-22 planes and a helicopter had dropped bombs containing toxic chlorine and sarin nerve gas on the village of Ltamenah in the Hama region in March 2017.

The OPCW's Investigation and Identification Team (IIT), whose formation was opposed by Moscow and Damascus, said more than 100 people had been affected by the attacks, carried out on March 24, 25 and 30, 2017.

It said the 50th Brigade of the 22nd Air Division of the Syrian Air Force had dropped M4000 bombs containing sarin on the town, and a cylinder containing chlorine on a hospital.

"Military operations of such a strategic nature as these three attacks only occur pursuant to orders from the highest levels of the Syrian Arab Armed Forces," the report added.

OPCW chief Fernando Arias said it was up to the watchdog's members, the U.N. Secretary-General and the international community to take any action they deemed necessary.

"No amount of disinformation from Assad’s enablers in Russia and Iran can hide the fact that the Syrian regime is responsible for numerous #chemicalweapons attacks," he tweeted.

Chemical attacks on the Syrian towns of Douma and Khan Sheikhoun led U.S. President Donald Trump to carry out missile strikes on Syrian regime targets in April 2018 with the backing of France and Britain.

In 2013, chemical attacks on the opposition-held Ghouta suburbs around Damascus killed hundreds of civilians, many of them women and children, the deadliest use of chemical weapons in decades.