The bond between Turkey and Bangladesh to be even stronger: FM 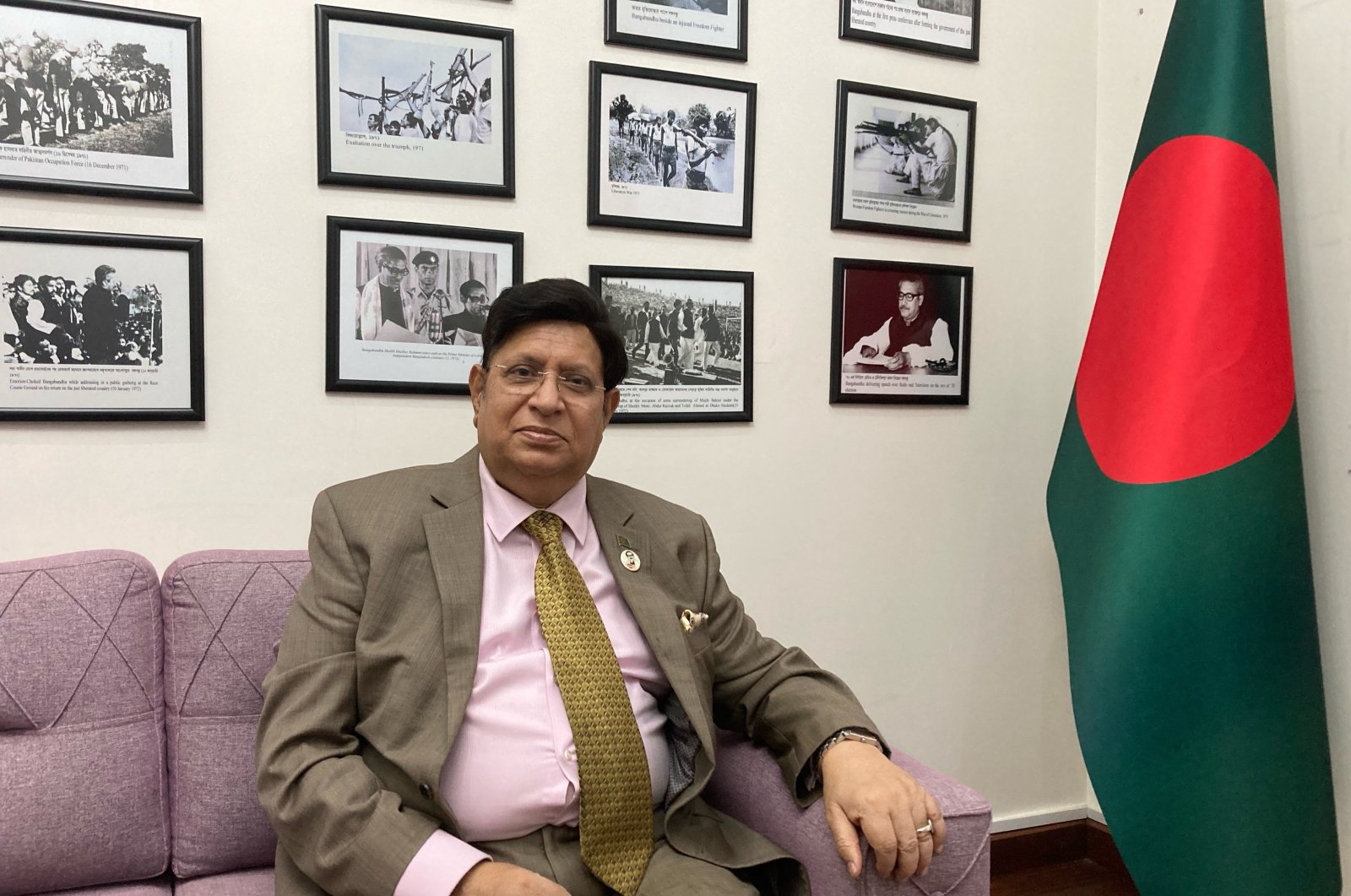 Turkey and Bangladesh have stepped up efforts to enhance their bilateral relations in every field, Bangladesh’s foreign minister, Dr. A.K. Abdul Momen, told Daily Sabah in an exclusive interview

Turkey and Bangladesh have deep-rooted relations that are developing day by day in every field including economy, culture and humanitarian assistance, Bangladesh’s foreign minister, Dr. A.K. Abdul Momen, told Daily Sabah during an unofficial visit to Turkey.

The foreign minister emphasized the history of the friendly relations between the two countries. Turkey recognized the People's Republic of Bangladesh in 1974, just two years after the country became independent. The two countries sent envoys and opened embassies in 1976. Since then, the two Muslim countries have always had good relations.

One of the main areas of collaboration is education. There are currently around 600 Bangladeshi students in Turkish universities. Stating that the number is still low, Abdul Momen suggested creating more projects to provide scholarships and funds to students willing to study in Turkey. Since going abroad to study is a heavy financial burden, most young students need governmental funds. Abdul Momen added that the student exchange may help the countries, as well as students, who gain experiences and knowledge they can use back home.

Speaking on cultural ties Abdul Momen said in the district Sylhet, where he was born, there is a graveyard called Shah Jalal in Bengali dedicated to Sufi philosopher Mevlana Jalaladdin Rumi. Bangladeshis believe that Rumi was born in the Konya province of Turkey and died in Bangladesh.

"Both cities are known as the spiritual capitals of their countries. And Bangladeshi people are really into Sufism. The two countries may design further steps for their relationships on the basis of Sufism," he said.

Turkish TV series also contribute to the improvement of cultural relations. The people of Bangladesh feel a bond with Turkish society thanks to historical dramas such as "Diriliş Ertuğrul" ("Resurrection Ertuğrul") and "Muhteşem Yüzyıl" ("Magnificent Century"), which are very popular in their country.

Abdul Momen spoke about the vision of Bangladesh for both the near and distant future.

"We have a really long road map plan. A long time ago, we aimed to enter the developing countries category in 2020. And now, we are providing all criteria to become a developing country and leaving the list of the least developed countries," he said.

Bangladesh has created a 100-year visionary plan beyond all politics called Delta 2100 to achieve the goals of slowing the pace of the climate crisis and helping all of humanity.

"We have signed an agreement with the U.N. saying that we want to achieve all 17 sustainable development goals that the U.N. determined. Also, the U.N. declared three countries as the best in achieving Sustainable Development Goals, and Bangladesh is one of them," the Bangladeshi envoy said.

Bangladesh aims to become a more prosperous nation by 2041. The country is moving toward this goal with 2,100 steps, outlined in five-year interim plans. With the "Culture of Peace" U.N. project, initiated by Bangladesh, the country provides peacekeepers and will host the World Peace Conference on Dec. 4-5, 2021.

Helping humanity is a mindset for the people of Bangladesh, according to Abdul Momen. "Even in 1408, when the U.S. wasn’t found yet, when there was no Renaissance yet, Bangladeshi people started a campaign for humanity. They produced music, poetry and thought. As Bangladeshi people, it is our mindset to help humanity." he said.

Bangladesh is now hosting 1.1 million Rohingya refugees. Abdul Momen said that Bangladesh has put in a huge effort for Rohingyas, especially in the last four years.

The Southeast Asian country, also known as Burma, has fallen into a deeper crisis since the military seized power from Aung San Suu Kyi's elected government on Feb. 1, with almost daily protests and a crackdown by the junta in which hundreds of people have been killed.

Even though Myanmar agreed to take the Rohingyas back, to provide them with safety and security and even to create a conducive environment for refugees to return voluntarily, it has not fulfilled any of these promises. Nowadays, Bangladesh has a resolution that all U.N. members have accepted. The resolution includes accepting that human rights have been violated by Myanmar and that those who participated in criminal activity should be punished.

On the other hand, Abdul Momen stated that Western countries including the U.S. are silent about the Rohingya issue. While most of the developed countries raise their voice against all forms of human rights violations, most of them continue bilateral trade with Myanmar. Some have even increased their investment in Myanmar.

For the stability of Myanmar and the return of Rohingya refugees to their own region, once known as Arakan state, there is a critical need for international support, Abdul Momen stated. The foreign minister also thanked Turkey for always being there to help Bangladesh with Rohingya refugees.

"We are thankful to our many friends all around the world, including Turkey, who are supporting us with humanitarian aid. Turkey set up a hospital in Bangladesh, and President Erdoğan visited our country. Turkey also believes that Rohingya refugees must go back to their country for a better future," he said.

Abdul Momen called all countries, especially developed countries to raise their voices higher for the human rights violations in Myanmar and to act according to their statements.