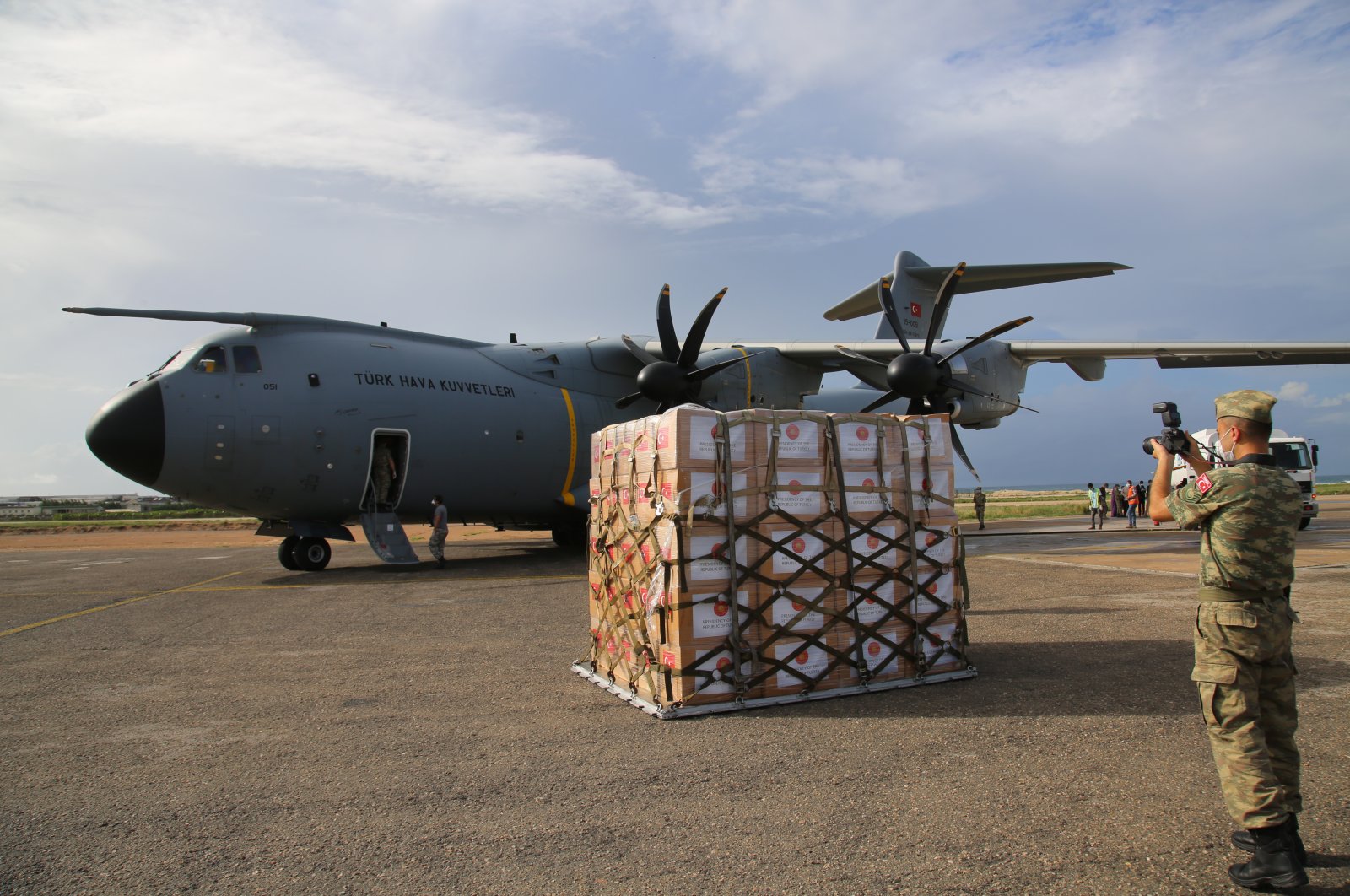 Medical supplies that Turkey sent to fight the coronavirus outbreak arrive in Somalia, May 2, 2020. (AA Photo)
by DAILY SABAH May 03, 2020 11:54 am
Edited By Dilara Aslan

The U.S. and Somalia expressed appreciation for medical supplies that Turkey sent to aid in their fight against COVID-19, while Turkey continues to underline the importance of cooperation, solidarity during the pandemic, as it helps other countries in need

As Turkey continues to show its solidarity across the globe, sending medical supplies to countries in need all around the world to fight the coronavirus outbreak, top U.S. and Somalia diplomats, whose nations last week received support, thanked Turkey for the help.

One day after a Turkish military plane landed in Washington, D.C. with medical supplies to help combat the disease, U.S. Secretary of State Mike Pompeo said on Twitter Sunday that they are grateful to Turkey.

"We are grateful for our @NATO Ally #Turkey. Their support is helping U.S. companies who are doing good work to help fight #COVID19 around the world," wrote Pompeo. "We will get through this together, and come out stronger than before."

Congressman Alex Mooney of West Virginia on Saturday also wrote on Twitter thanking Turkey for the aid. "Turkey's shipment of medical supplies and essential equipment to the U.S. to help combat the coronavirus is a generous gesture of goodwill and solidarity," he said.

A Turkish military cargo plane carrying a second batch of supplies landed at Joint Base Andrews outside Washington, D.C. on Friday.

"A second plane with medical aid supplies arrived in the US in solidarity with our NATO ally. We will continue to support our allies, friends and those in need around the world. This is not a matter of politics but our President Erdogan’s and our country’s humanitarian approach," presidential Communications Director Fahrettin Altun wrote on Twitter Sunday.

"We also sent a shipment of medical supplies to Somalia to help our brothers and sisters to fight against the coronavirus outbreak. The shipment included for the first time Turkey’s locally manufactured ventilators," he added.

Altun stated that he has heard a lot of positive feedback and praise about Turkey's humanitarian aid to almost 60 countries in need. "Everyone should remember that Turkey has been leading the world in humanitarian aid ratio to its GDP even before this pandemic. Turkey will emerge from this crisis having mobilized national resources for the well-being of our people, cared for the sick and the weak, helped others around the world and led global efforts to mount a global response," the communications director said.

Elsewhere, the minister of foreign affairs and international cooperation of the Federal Republic of Somalia, Ahmed Awad, also thanked Turkey for support against the virus.

“Along with @AbikarDr & the Min of @MoHADM_Somalia, we received shipment of ventilators, test kits, medical supplies, masks, overalls & materials from #Turkey to support us against #COVID__19. We are grateful to the Gov’t & People of #Turkey for standing with us during this crisis,” Awad wrote on Twitter Sunday.

"Today, by instructions of President Recep Tayyip Erdoğan, a cargo load of medical supplies, masks, overalls, test kits and other equipment is going to Somalia to help them against COVID-19," İbrahim Kalın said Friday on Twitter.

"Turkey stands together with Somalia and Africa against all calamities," Kalın added.

Recalling Erdoğan's first visit to Somalia in 2011 when "tens of thousands of people had died because of the famine," Kalın said, "the visit drew the world's attention to the forsaken country of Somalia, and Erdoğan became the hope of our Somali brothers and sisters."

Turkey, as a country that has made a name for itself in the last decade with its humanitarian efforts, has already become a prominent figure of this fresh statecraft by sending medical aid packages to many corners of the globe nearly every day.

Turkey has helped at least 57 countries, including Italy, Spain and the U.K., and remains the world's third-largest provider of humanitarian support during the pandemic.

The first aid kits were delivered to China on Jan. 31, with protective overalls, 93,500 medical masks, 500 medical protective glasses and 10,000 unsterilized pieces of equipment.

Since first appearing in Wuhan, China last December, the coronavirus has spread to at least 187 countries and regions, with the U.S. and Europe the hardest-hit areas.