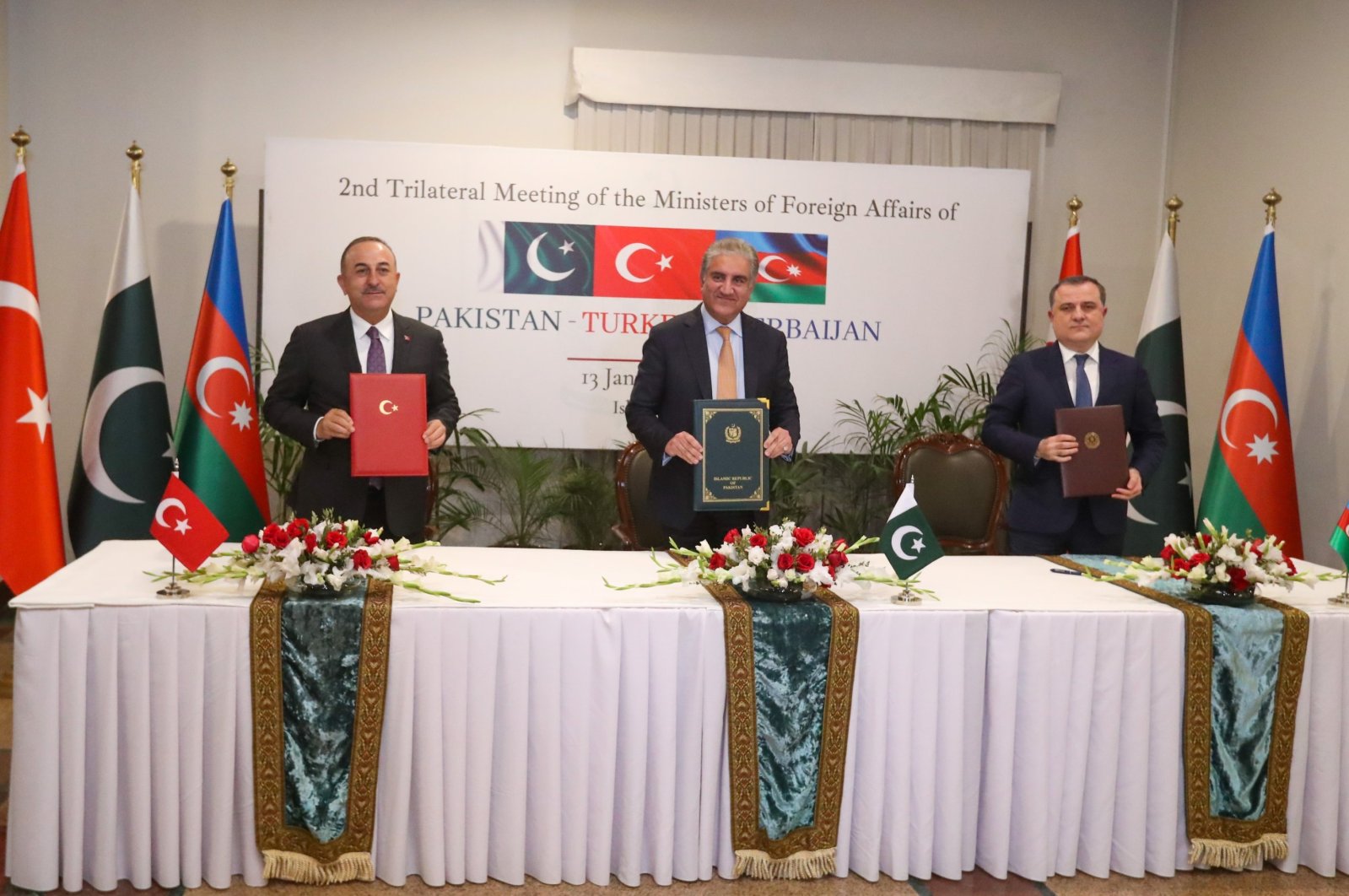 Speakers at an international conference on Tuesday underlined the importance of coordinating strategies for improved future cooperation between Turkey, Azerbaijan, Pakistan and other Central Asian nations.

"These countries are at different levels of development, and we should find ways to harmonize development strategies of these countries," said Mesut Hakkı Caşın, an adviser for Turkey's Center for Diplomatic Affairs and Political Studies.

"Each country has its own priority areas like European Union for Turkey," Caşın said at the peace conference co-hosted by the Istanbul-based research center in partnership with Pakistan's Lahore Center for Peace Research on Tuesday.

"It does not necessarily mean Turkey will turn its back to the East; (rather) Turkey with its EU aspirations will be more beneficial to Pakistan, Iran, Azerbaijan and other countries," he added.

The conference titled "Turkey, Pakistan and Central Asia: Partnership for Peace" is being co-hosted by Turkey's Center for Diplomatic Affairs and Political Studies (DIPAM) in partnership with Pakistan's Lahore Center for Peace Research (LCPR).

The two-day conference hopes to encourage conversations between the stakeholders about the inherent challenges and opportunities experienced in laying the foundation for a prosperous, peaceful future in any nation.

"Turkey, Pakistan and the Central Asian republics, which have maintained a strong friendship and strategic cooperation in the region a long time, are capable of putting their subjective ideas into action with their intellectual maturity to make the contribution for the establishment of global peace. All parties of these advocate basic principles of peace and mutual respect and thus feel it obligatory to bring together all those who wish to contribute to the noble cause of peace and interdependence," a statement about the event said.

Salman Shah, an expert from Pakistan, noted that a nation's ability to participate in the cooperation between these states is dependant on its infrastructure, which applies to its transport, soft power and local money.

"Turkey is growing fast and is a gateway to Europe while Pakistan is a gateway to China and Central Asia," he said, adding that markets were becoming more important than resources.

Describing China's infrastructural alliance as a "new model" of development, Shah insisted on developing physical transportation and other related infrastructures that "can have plenty of opportunities."

"The China-Pakistan Economic Corridor infrastructure runs close to Iran and Afghanistan, and it is a matter of time when it gets connected to these countries and then to Turkey and other countries," he said.

Citing the Ottoman, Safavid and Mughal empires, which had inter-trade ties among other relations, Shah said there is a "need to revive them."

Shah said the responsibility of overseeing the security of "our region should be within ourselves."

"Security of the economic arrangement of these countries should remain with them and Turkey- Pakistan military exercises are significant in this," he added, referring to the recent Ataturk 2021 joint military exercise.

"Security of our region belongs to us – it is very good that Turkey on one end and Pakistan on the other end are collaborating in this regard," he said. "Our problem is internal security of our region, making it viable for economic and cultural development."

Vugar Bayramov, from Azerbaijan, said that cooperation between Azerbaijan, Turkey and Pakistan in both strategies and projects promotes regional peace.

Referring to the trilateral cooperation between the countries, he said: "Connectivity-regional transportation corridors are essential for sustaining peace and development."

"Transport corridors will increase exports and operations within different regions," said Bayramov, chairperson of the Center for Economic and Social Development. "They connect supplies and demands."

Highlighting Azerbaijan's call to Pakistan and Turkey to invest in Nagorno-Karabakh, Bayramov said the development of infrastructure and connectivity would "promote multilateral relations with other countries."

Meruert Makhmutova from Kazakhstan pointed to the oil-based economy of her country and the Central Asian region.

"Oil plays an important role in the economy in Kazakhstan," Makhmutova, director of the Almaty-based Public Policy Research Center, told the conference.

"And the diversification of the economy, in Central Asian nations, will play an important role in connectivity," she said.

She added that in terms of international cooperation, Turkey and Pakistan have great opportunities in Kazakhstan.

The foreign ministers of Azerbaijan, Turkey and Pakistan issued a joint declaration last month following the second round of Trilateral Dialogue of the Ministers of Foreign Affairs which was held in the Pakistani capital of Islamabad.

The Islamabad Declaration said the ministers agreed to enhance joint efforts to combat Islamophobia, discrimination and the persecution of Muslim minorities, especially at the regional and international level. They expressed serious concerns over the grave human rights violations and crimes against humanity committed against Muslim communities in different parts of the world.

The ministers also discussed the far-reaching implications the COVID-19 pandemic has had on economic growth and public health, agreeing to exchange information, research, expertise and best practices. They called for enhanced international cooperation and solidarity to effectively address the challenge, while keeping in mind the limitations, both financial and having to do with capacity, of developing nations.