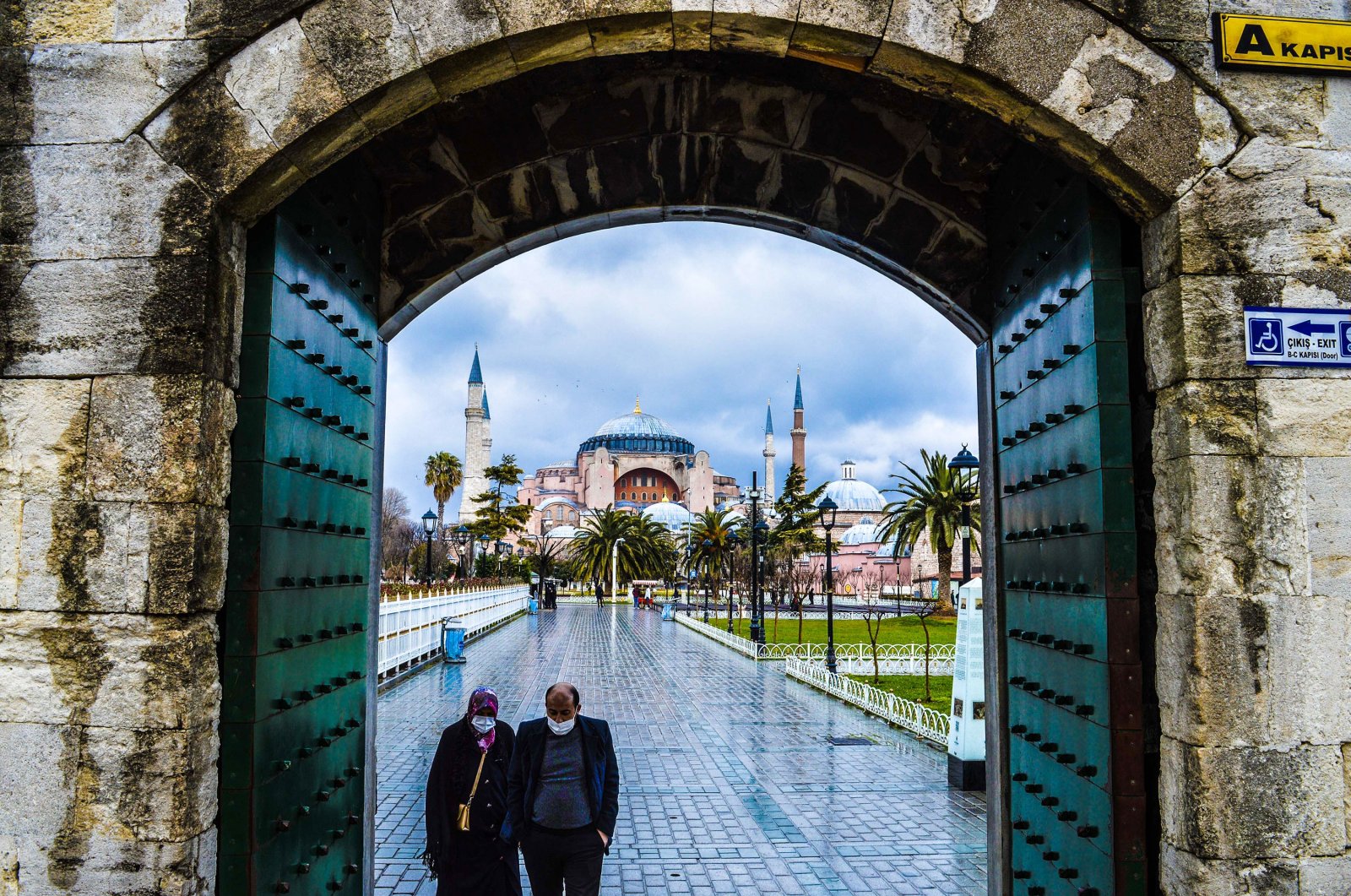 People walk towards the Blue Mosque as Hagia Sophia Grand Mosque is seen in the background in Istanbul, Turkey, March 2, 2021. (Getty Images)
by Daily Sabah with AFP Jul 24, 2021 5:37 pm
RECOMMENDED

As Turkey marks the first anniversary of the reopening of Hagia Sophia Grand Mosque the Turkish Foreign Ministry called the U.N. cultural agency’s concern over the conversion “biased.”

In the statement published Saturday, the ministry said that the usage of the Hagia Sophia and the Kariye Museum, which was known as Chora Church, is a matter for Turkey alone to decide as the buildings are the property of the country. The ministry emphasized that Turkey will meticulously protect the monuments' "historical, cultural, and spiritual value."

The World Heritage Committee of the U.N.'s cultural agency UNESCO on Friday asked Turkey to submit by Feb. 1, 2022, "an updated report on the state of conservation of the property" referring to the Hagia Sophia, expressing "grave concern" over the consequences of its conversion into a mosque.

It said it "deeply regrets the lack of dialogue and information" over Turkey's intention to change the status of the Hagia Sophia and Chora museums.

The committee expressed "grave concern about the potential impact of changes that these key components may have on the Outstanding Universal Value of the property" and urged Turkey to engage in international cooperation and dialogue before any further major changes are implemented on the properties.

The ministry denied the statements by UNESCO and said in their own statement that they have been in contact with UNESCO since the very beginning of the conversion process in an “open and undisrupted” manner. “The UNESCO Advisory Mission visited Istanbul twice, through the invitation of Turkey, clearly demonstrating our country’s constructive and transparent approach. This has been also highlighted in the Advisory Mission’s reports,” the statement read, adding that the continuous restoration work on both Chora and Hagia Sophia are up to the standards of UNESCO.

"We are astonished by the decision adopted during the Extended 44th Session of the World Heritage Committee, where Turkey is currently an observer State Party, which includes expressions that contradict with the Advisory Mission reports and the factual situation in these monuments," the statement read, referring to the latest session of the committee. "Turkey disassociates itself from the relevant articles of the decision on the 'Historic Areas of Istanbul' based on biased, unfair wording prepared with political intentions, which is incompatible with the implementations, the factual situation and the Advisory Mission reports."

Turkey will "continue its diligent and rigorous efforts" to preserve its sites within the framework of its commitments to the 1972 World Heritage Convention as a State Party since 1983, fully aware of its rights, prerogatives and responsibilities towards its properties on the UNESCO World Heritage List.

The iconic monument that is the Hagia Sophia served as a church for 916 years until the conquest of Istanbul. It then served as a mosque from 1453 to 1934 – nearly 500 years – and most recently as a museum for 86 years. One of the most visited historic buildings in Turkey by domestic and international tourists, Hagia Sophia was added to the UNESCO World Heritage List in 1985.

On July 10, 2020, a Turkish court annulled a 1934 Cabinet decree that had turned Hagia Sophia into a museum, paving the way for its use again as a mosque after the 86-year hiatus.

Since its reopening, the mosque has welcomed more than 3 million visitors – despite the restrictions due to the COVID-19 pandemic.