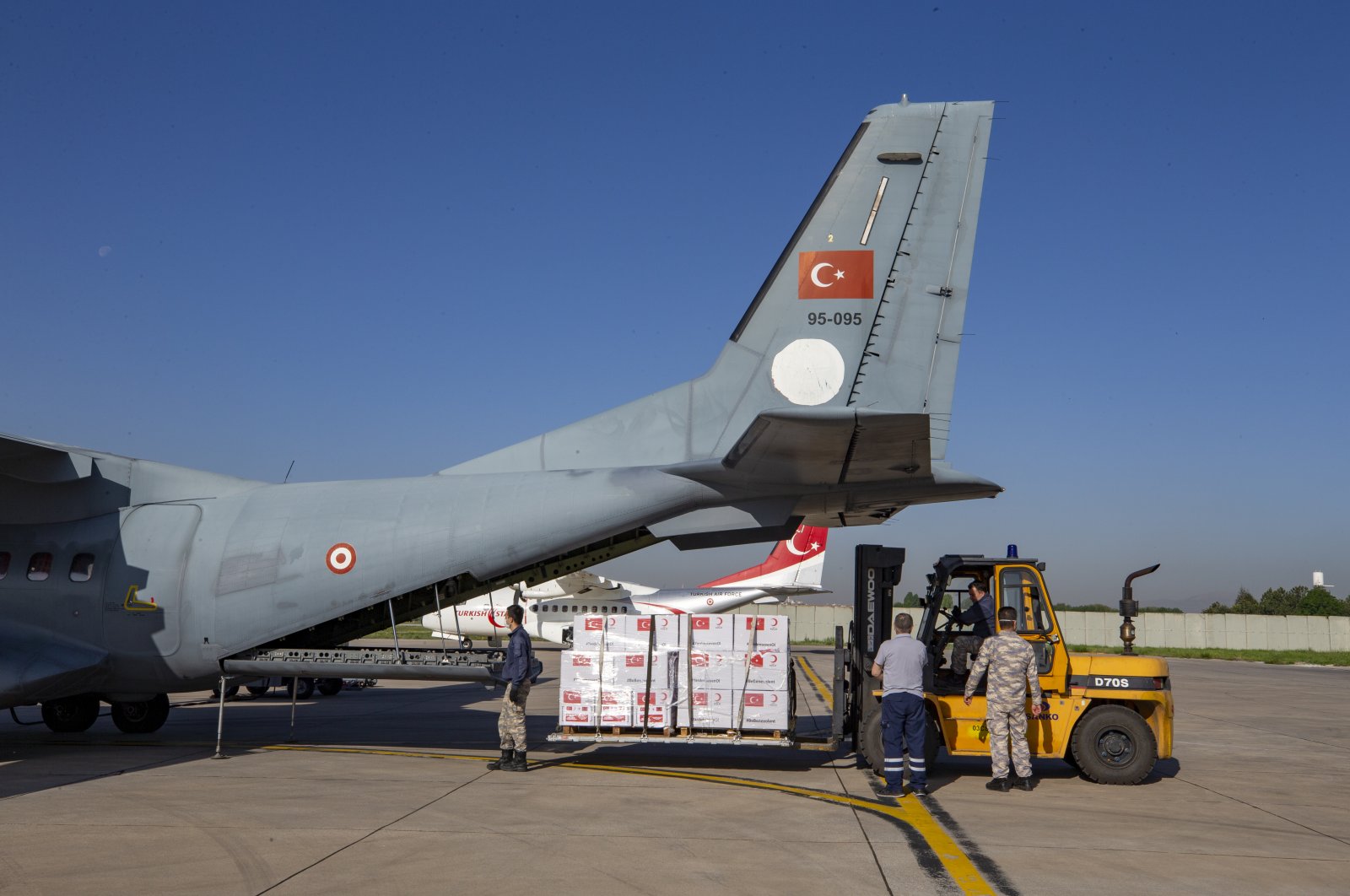 A Turkish military plane carrying medical supplies departed for North Macedonia and Albania to support those countries' fight against COVID-19, Etimesgut, Ankara, Turkey, May 12, 2020. (AA Photo)
by DAILY SABAH WITH AA May 12, 2020 11:28 am
RECOMMENDED

Turkish medical aid for the battle against the pandemic continues to be shipped to virus-hit countries, as cargo planes take off from the capital Ankara to various corners of the world nearly every day.

A Turkish military plane carrying medical supplies departed from Turkey for North Macedonia and Albania on Tuesday to support those countries' COVID-19 fight.

"Turkish Armed Forces aircraft, carrying the medical supplies prepared at the direction of President Recep Tayyip Erdoğan by Turkish Red Crescent (Kızılay) for use against the COVID-19 outbreak, took off from Ankara Etimesgut Airbase for Republic of North Macedonia and Albania," the Turkish Defense Ministry said on Twitter.

North Macedonia has reported 1,664 cases and 91 deaths so far, according to data compiled by Johns Hopkins University in the U.S. In Albania, there are 872 cases of the virus with 31 deaths.

Welcoming the aircraft on the runway, Turkey's ambassador to the country Mehmet Hasan Sekizkök told reporters that the threat posed by the pandemic could be overcome through international cooperation and solidarity.

"This is the second plane in the last month carrying medical supplies from Turkey to North Macedonia," said Sekizkök.

"I believe this will continue. As the government of North Macedonia, we really care about this aid," said Bayraktar.

After originating in China last December, COVID-19 has spread to at least 187 countries and regions. Europe and the U.S. are currently the worst-hit areas.

The pandemic has killed more than 286,300 people worldwide with over 4.17 million confirmed cases, while recoveries have surpassed 1.45 million.

As the fight against the pandemic continues, Turkey has come to the forefront as a humanitarian leader, while still maintaining its domestic success against the virus. Some two-thirds of the world have requested medical supplies from Turkey to fight the coronavirus, and nearly half of these requests have been met, Turkey's foreign minister said last week. A total of 128 countries have requested medical supplies from Turkey in the form of grants, export permits or purchases, Foreign Minister Mevlüt Çavuşoğlu said in a televised interview. Underlining that nearly 64 countries have received coronavirus aid from Turkey, Çavuşoğlu said he recently spoke to Health Minister Fahrettin Koca on how to meet more countries' requests for medical supplies. The huge number of humanitarian aid requests from around the world "shows that Turkey is a reliable source and a true friend," Çavuşoğlu added.

Meanwhile, another set of medical supplies sent by Turkey arrived in Kazakhstan on Monday.

Turkey sent the country 150,000 face masks and sanitizers said a statement by the Turkish Embassy in Nur Sultan. "We believe that medical supplies will support our Kazakh friends in the fight against the COVID-19 outbreak, which has become a global threat," the embassy added.

Turkey's aid to Kazakhstan is a clear example of global solidarity in combating the virus, Kazakhstan's Foreign Ministry said in a statement.

The country is also set to send medical aid to Israel and Palestine to help both countries combat the coronavirus, the country’s Official Gazette declared on Monday.

The supplies will include 100,000 masks, 40,000 PCR test kits, two tons of hand sanitizer and other equipment as part of a grant agreement between Turkey and Palestine signed on April 14.

Another delivery is expected to be sent to Haiti, the country's Minister of Foreign Affairs and Worship announced from Twitter on Tuesday.

"I spoke this morning with my Turkish counterpart, @MevlutCavusoglu, to thank, on behalf of @moisejovenel, the Government of Turkey to have responded to our request and planned to send a batch of medical equipment this week to Haiti in support of the fight against COVID-19," Claude Joseph said on Twitter in French.

As a response to Joseph, Çavuşoğlu stated that Turkey will always be there for its "friend," the people of Haiti, both in French and Turkish.

Turkey has a long tradition of sending humanitarian aid to countries facing difficulties, even for those with whom it has tense diplomatic relations. For instance, in 1938, only a decade after the country’s foundation following a bloody war, Turkey sent medicine to China amid the outbreak of cholera in the Far East. Similarly, in 1941, Turkey sent medicine to the Greek army upon the request of Greece, a country that fought against Turkey during the liberation war. Similar aid has been provided to many other countries over the years, including Ethiopia, Bangladesh and Afghanistan.