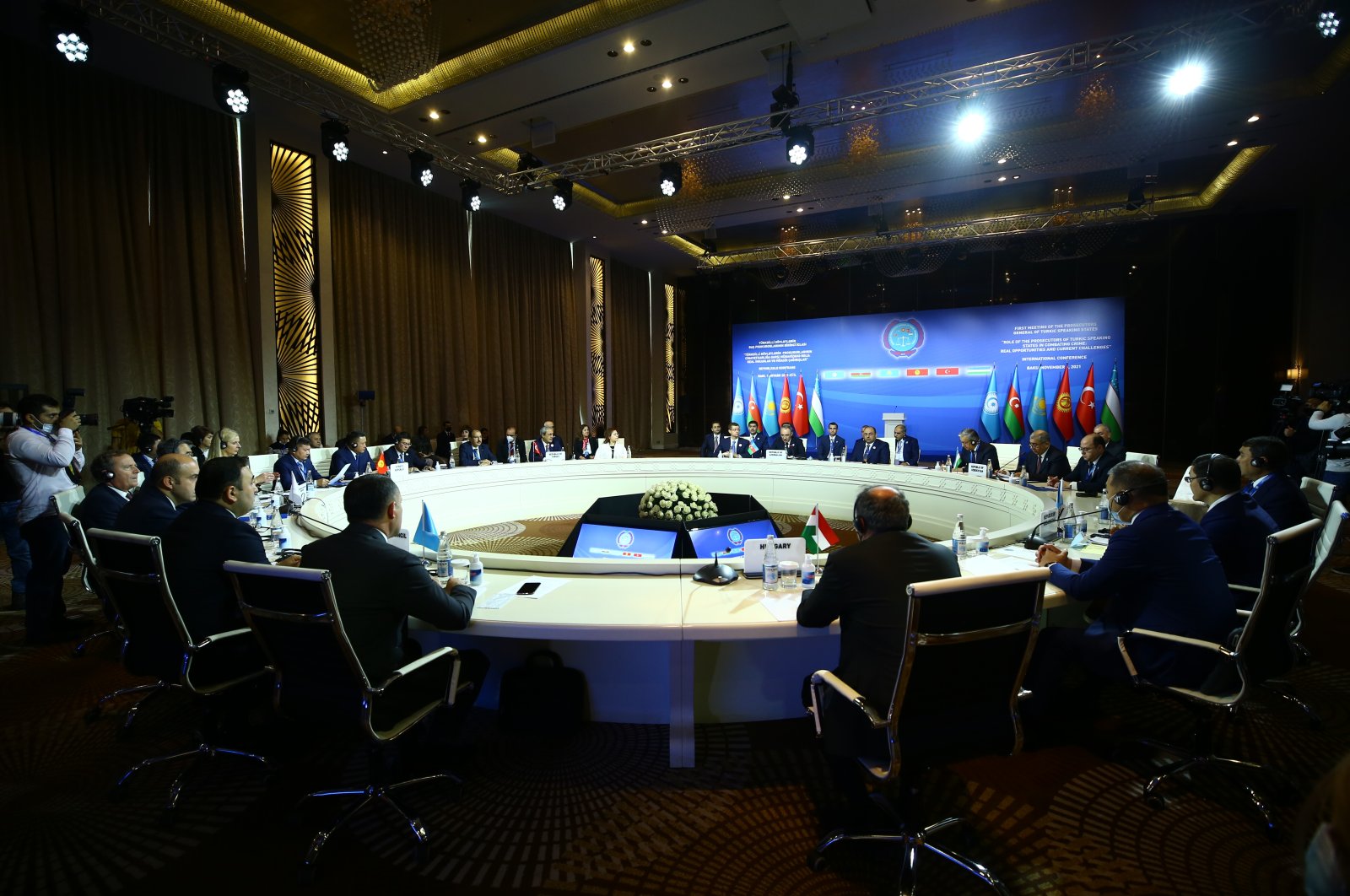 Turkey attaches great importance to the establishment of new grounds for dialogue by Turkic Council members' judicial organs at a time when threats that directly affect countries and their citizens such as terrorism, irregular migration and transnational crimes are increasing, President Recep Tayyip Erdoğan said Monday.

Expressing that the Turkic Council, which was established 12 years ago, is one of the symbols of unity and solidarity, he emphasized that the global reputation of the council, which completed its institutionalization in 12 years, is gradually increasing.

Erdoğan stated that while the Turkic Council has increased its power with new participations, it has come out of a regional cooperation format and gained an international structure.

"The number of countries that have expressed their desire to cooperate with our council and to be an observer to our council is increasing day by day. While our countries defend the rights and interests of their citizens in multinational platforms, on the other hand, they strengthen their solidarity in the Turkic Council, the only organization that brings the Turkic world together," he said.

"The events we have witnessed especially in recent years have shown that it is more than a necessity for us to develop new ways of cooperation in every field from trade to transportation, from defense to health. As a matter of fact, we recently held the Turkic Council Media Forum in Istanbul, hosted by our country, with the participation of competent people. We had the opportunity to identify our strengths and weaknesses in communication with the discussions held within the scope of the forum. We have taken critical decisions that will increase the effectiveness of our relevant units in the fight against disinformation campaigns targeting our countries," the president added.

Expressing that they are justifiably proud of the Turkic Council's Meeting of Chief Prosecutors in Baku, right after the Turkic Council Media Forum, Erdoğan said: "We attach great importance to the establishment of new dialogue grounds by our judicial organs at a time when threats such as terrorism, irregular migration and cross-border crimes that directly affect us and our citizens increase. This historic step, which will increase the sharing of experience and information between our Offices of Chief Public Prosecutor, and make communication and cooperation much more effective, we believe it will bring us closer to our goals.”

Erdoğan addressed the participants via video link at the opening session of the forum. Turkish Republic of Northern Cyprus (TRNC) President Ersin Tatar, Turkey's Communications Director Fahrettin Altun and Secretary-General of the Turkic Council Baghdad Amreyev each gave a speech at the forum's opening.

More than 350 guests were expected to attend, including prominent media representatives, academics, senior officials from public institutions and organizations, social media influencers and university students from Turkic Council members Azerbaijan, Kazakhstan, Kyrgyzstan, Uzbekistan and Hungary, which has observer status, as well as Turkmenistan and Turkish Cyprus.

Cooperation opportunities in the media, TV series and film sectors in the Turkic world, as well as social media and the joint struggle against disinformation, were among the topics that were discussed during the forum.

Commenting on the forum, Altun said: "We wish to build the future together with the members of the Turkic Council as part of a common mind and vision. Under the leadership of the Turkish president and the leaders of other member states, we aim to move relations much further in all areas through effective cooperation and strong solidarity."

Altun underlined the important role of the media in developing cooperation among the Turkic countries and the importance of studies that will strengthen the consciousness of unity among the youth of the Turkic world.

The Turkic Council Meeting of Chief Prosecutors aims to develop and strengthen the cooperation between the public prosecutors of Turkey, Azerbaijan, Kyrgyzstan, Uzbekistan and Kazakhstan. The meeting will last until Wednesday.

After the opening meeting, the founding document of the Meeting of Chief Prosecutors within the Turkic Council was signed. The Chief Public Prosecutor of the Supreme Court of Appeals Bekir Şahin signed the document on behalf of Turkey.

In his statement to the press, Şahin noted that the Turkic Council has cooperated in many fields and that it would be a great shortcoming if there were no such cooperation between the countries' judicial organs.

Stating that the Chief Public Prosecutor's Offices constitute an important part of the judiciary, Şahin said: "By establishing this formation, we pave the way for the Turkic Council to become stronger. Now the judicial branch has been formed. From now on, the Turkic Council will become one of the leading institutions in the world by developing cooperation in other fields."

Also mentioning the attacks carried out by Armenia on Azerbaijani civilian settlements during the Karabakh war, Şahin said: "Azerbaijan also filed a lawsuit with the World Court on this issue. I believe that Azerbaijan will win. As Turkey, we will continue to provide all kinds of support and assistance to Azerbaijan in this regard."

Azerbaijan recently applied to the International Court of Justice (ICJ), also known as World Court, to order neighboring Armenia to hand over maps showing the location of landmines in the Karabakh territories liberated by Azerbaijani forces from the nearly three-decade Armenian occupation last year, while the judges are also considering tit-for-tat claims that the other side violated an antidiscrimination treaty.

This time last year, Azerbaijani troops drove Armenian forces out of swathes of territory they had occupied since the 1990s, in and around the Nagorno-Karabakh region, before Russia brokered a cease-fire.

Azerbaijan accused rival Armenia at the United Nations' top court of laying landmines as part of a campaign of "ethnic cleansing" despite the end of last year's war.