Turkey is a global partner for Congo, envoy says 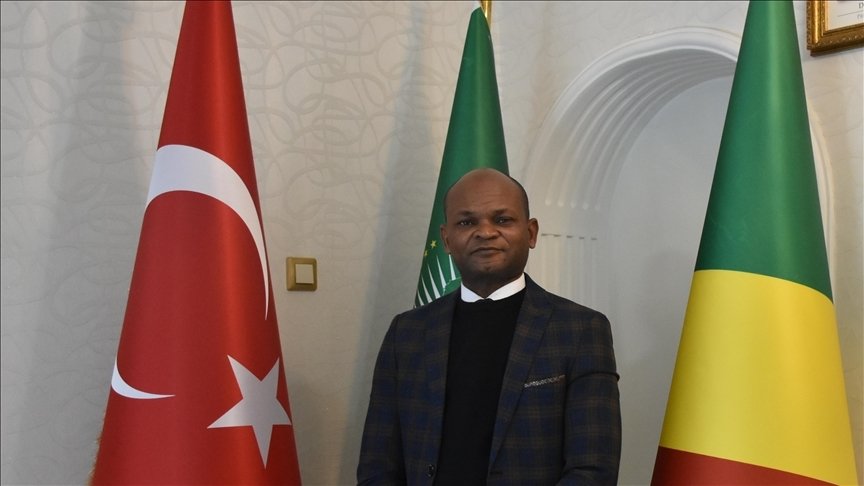 Jocelyn Francis Wabout, political and administrative adviser of the Embassy of the Republic of Congo in Ankara, Turkey, Dec. 8, 2021. (AA Photo)
by DAILY SABAH WITH AA Dec 08, 2021 11:25 am
RECOMMENDED

Congo sees Turkey as a strategic and global partner with which it has been developing relations in many fields, political and administrative adviser of the Embassy of the Republic of Congo in Ankara said Wednesday.

Before the Turkey-Africa Partnership Summit to be held in Istanbul on Dec. 17-18, Jocelyn Francis Wabout spoke about the developing relations between Turkey and the Republic of Congo to Anadolu Agency (AA).

Noting that the relations between Turkey and his country have been on the rise recently, Wabout stated that 15 official agreements have been signed between the two countries and numerous memorandums of understanding are proof of this.

Wabout reminded that the third main committee for technical, economic and commercial cooperation between the two countries convened in May.

Noting that various agreements signed at the meeting were reviewed, Wabout pointed out that these meetings were a good opportunity to examine the strengths and weaknesses of the agreements.

Wabout added that remarkable progress has been made in the relations between Ankara and Brazzaville administration in the last decade.

Stating that Turkey is one of the four leading countries with which Congo has developed economic cooperation, Wabout said: "Turkey is a strategic and global partner for Congo. Turkey is an important country to which the Republic of Congo has entrusted the construction of many important monuments."

Noting that Congo President Denis Sassou-Nguesso wants to attend the next Turkey-Africa Summit with his delegation, Wabout stated that this summit lays the groundwork for establishing new areas of cooperation between Turkey and Africa including health, agriculture and vocational training.

Turkey will host the Turkey-Africa Partnership Summit, which will be attended by many African leaders, on Dec. 17-18 in Istanbul.

Turkey-Africa relations will be carried forward based on the principles of equal partnership and mutual gain, a workshop held by the Turkish Presidency's Security and Foreign Policy Committee emphasized last month.

President Recep Tayyip Erdoğan once again reaffirmed in October that Turkey’s approach in its ever-growing relations with African countries is based on equal partnership and a win-win principle, emphasizing the strong will to further develop commercial ties.

Turkey’s engagement with the African continent has been gaining pace over the years. Since taking office nearly two decades ago, first serving as prime minister, Erdoğan has been fostering ties with Africa, presenting Turkey as a fairer player than the continent’s former colonial powers. Ankara has been stressing the desire to advance relations with the continent on the basis of a win-win relationship and equal partnership while observing mutual respect. Both sides have been vowing to tap into their greater potential to further expand and deepen relations.