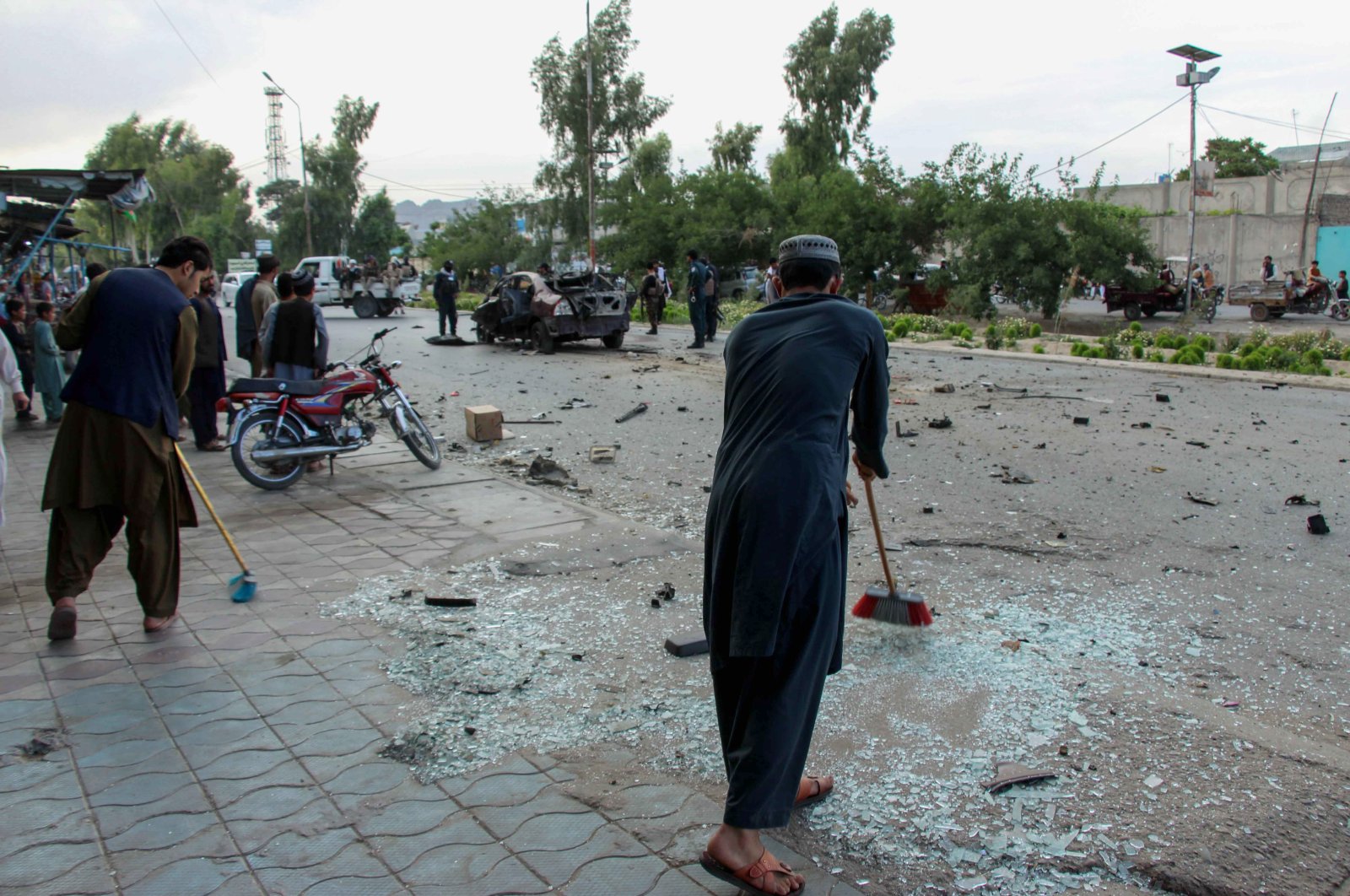 People remove smashed glass at the scene of a landmine explosion that targeted a vehicle of a local police commander, in Kandahar, Afghanistan, April 19, 2021. (EPA Photo)
by DAILY SABAH Apr 23, 2021 4:14 pm
RECOMMENDED

Turkey, Pakistan and Afghanistan on Friday called on the Taliban to reaffirm their commitment to achieving a negotiated settlement for Afghan peace.

In a joint statement adopted at the conclusion of a trilateral meeting of the foreign ministers of Turkey, Afghanistan and Pakistan held in Istanbul, participants reiterated their commitment to support a peaceful, sovereign, independent, democratic and unified Afghanistan.

Recognizing that sustainable peace can be achieved only through an inclusive Afghan-led and Afghan-owned political process that aims at a permanent and comprehensive cease-fire along with an inclusive political settlement to end the conflict in Afghanistan, they emphasized their support to the Afghanistan peace process and the ongoing Afghanistan peace negotiations in Doha for the achievement of a just and durable political settlement.

The meeting underlined the efforts of Turkey, Qatar and the United Nations to hold a high-level meeting in Istanbul aimed at giving momentum to the ongoing Afghanistan peace negotiations. They recalled that the Istanbul Conference was postponed after extensive discussions with all relevant parties with a view to holding the conference when conditions for making meaningful progress would be more favorable. They "called on all parties, in particular, the Taliban to reaffirm their commitment for achieving an inclusive negotiated settlement leading to lasting peace in Afghanistan desired by the Afghan people, the region and the international community."

A U.S.-backed Afghan peace conference in Istanbul hosted by Turkey, Qatar and the U.N. scheduled for Saturday was postponed due to the Taliban's non-participation. No new date has been set for those talks but Ankara has said they would take place after the Islamic holy month of Ramadan.

The three top diplomats also "deplored the continuing high level of violence in Afghanistan," adding they "emphasized the urgent need for an immediate cease-fire" to end the violence and "provide a conducive atmosphere for the peace talks."

Speaking at a joint news conference after the talks, Turkish Foreign Minister Mevlüt Çavuşoğlu said Ankara's support for the Afghan peace process and efforts to organize the conference in Istanbul would continue.

"As the co-organizers, we are continuing talks on this with all sides," he said, alongside Pakistani Foreign Minister Shah Mahmood Qureshi.

Qureshi said that the only solution in Afghanistan is negotiated political solution. Atmar, for his part, stated that Afghanistan committed to the peace process and its desire to hold a meeting involving all stakeholders remains intact.