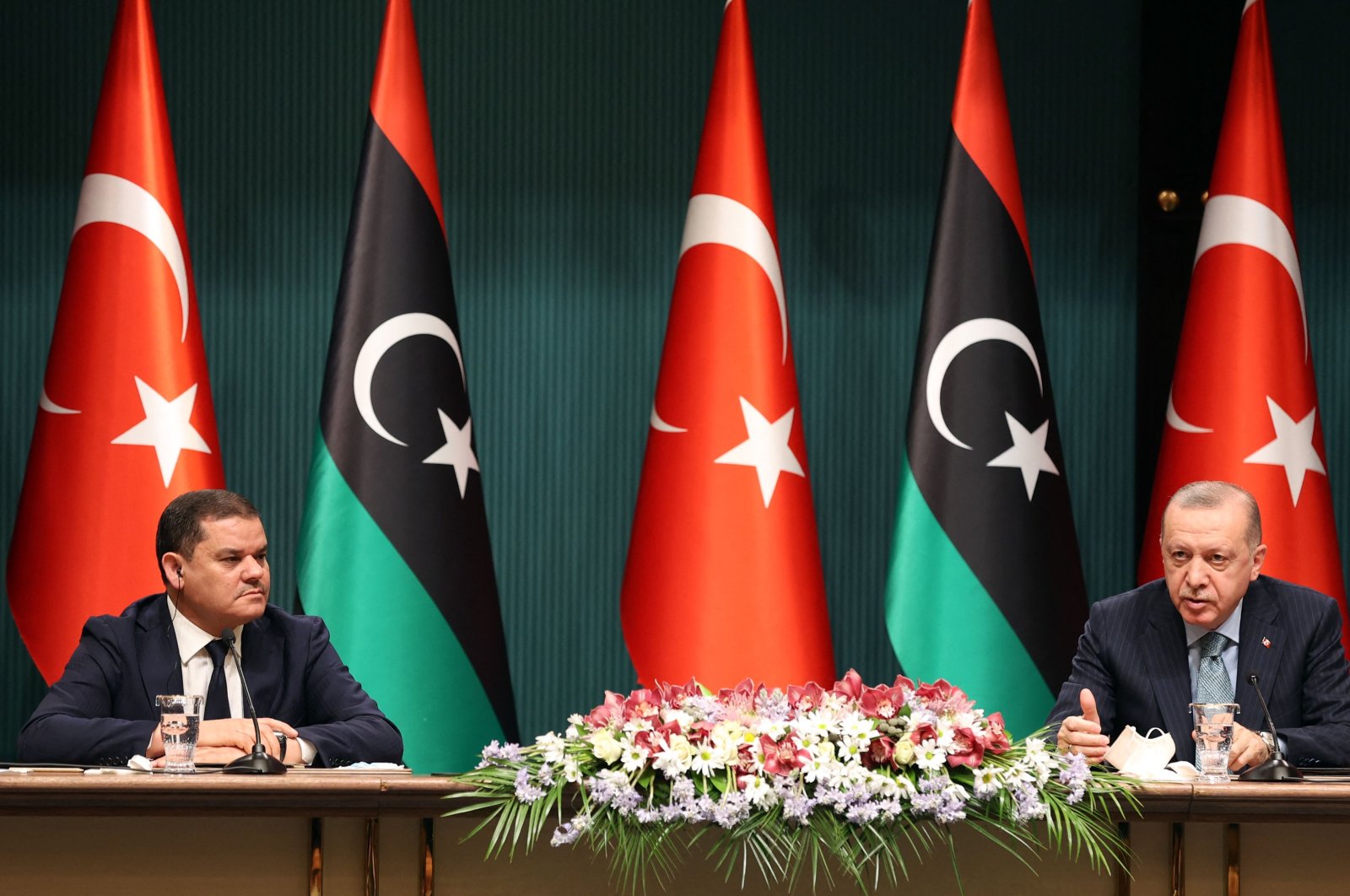 In a joint news conference after a meeting with Prime Minister Abdul Hamid Mohammed Dbeibah in Ankara, the president said the November 2019 maritime deal with Libya secured the national interests of both countries.

Erdoğan noted that Turkey’s support for the United Nations-recognized Government of National Accord (GNA) prevented putschist Gen. Khalifa Haftar’s forces from overtaking the capital Tripoli and carrying out massacres in the country, in addition to helping the cease-fire.

He continued by saying that he hopes the international community provides genuine support to the Libyan government to hold elections on the expected date.

The president also announced that Turkey will send 150,000 doses of COVID-19 vaccines to Libya on Tuesday. He did not specify whether Turkey would deliver the Chinese Sinovac or Pfizer-BioNtech vaccines to the country.

Meanwhile, Dbeibah said his country affirmed the importance of Turkey's role in ensuring a lasting cease-fire in Libya.

"We expressed our aspirations for cooperation with Turkey in security reforms and both fighting terrorism," he said.

He also underlined that respect for Libyan sovereignty is the basis for relations with other countries.

"We are very pleased with the support shown by Turkey to cooperate in order to hold the elections on time and to assure that the problems in Libya can be solved through political methods with their known frameworks," he said, referring to elections set for Dec. 24.

"We stressed the importance of Turkey's role in implementing a permanent and sustainable cease-fire."

He also expressed hopes of cooperating with Turkey in security reforms and combating terrorism as well as cross-border crime.

"With regard to the agreements signed between the two countries, especially the maritime ones, we confirm the validity of the frameworks on which these agreements were built and that they achieve the interests of both countries at the same time," Dbeibah asserted, referring especially to a November 2019 pact on maritime boundaries between the two countries.

He said Libya is pushing for a Mediterranean dialogue in which concerned countries discuss the achievement of everyone's interests.

"Libya awaits great work in reconstruction and development, and it welcomes all Turkish companies and firms from friendly and brotherly countries to contribute to this matter," he said.

"Certainly, Turkish companies will be the most important of these companies for their long experience working in Libya, and we will work to address any obstacles in this regard."

Dbeibah also said both countries expressed willingness to cooperate in the energy sector and an understanding was reached to resume flights to Libya of national flag carrier Turkish Airlines.

Strengthening cooperation in health care was also among the topics discussed, especially in combating pandemics, and especially the coronavirus, he said.

"We hope that relations with brothers in Turkey will set a positive example of what the relationship with Libya should be and what can be achieved toward mutual benefit," he said concluding his message with greetings to Turkey and the Turkish people on the occasion of the Islamic holy month of Ramadan.

The joint statement signed by both countries affirmed the importance of preserving sovereignty, independence, territorial integrity and political unity throughout Libya. It noted that the only legitimate leadership structures in the country are the Presidential Council and the Government of National Unity.

The statement highlighted the importance of coordinated determination to carry out the political process leading to Libyan elections on Dec. 24, as scheduled.

The statement also stressed the importance of holding a regional conference to support dialogue and cooperation in the Eastern Mediterranean to guarantee parties' rights.

Turkey had backed the Tripoli-based Government of National Accord (GNA) against the eastern-based forces of Haftar that were supported by Russia, Egypt, the United Arab Emirates (UAE) and France.