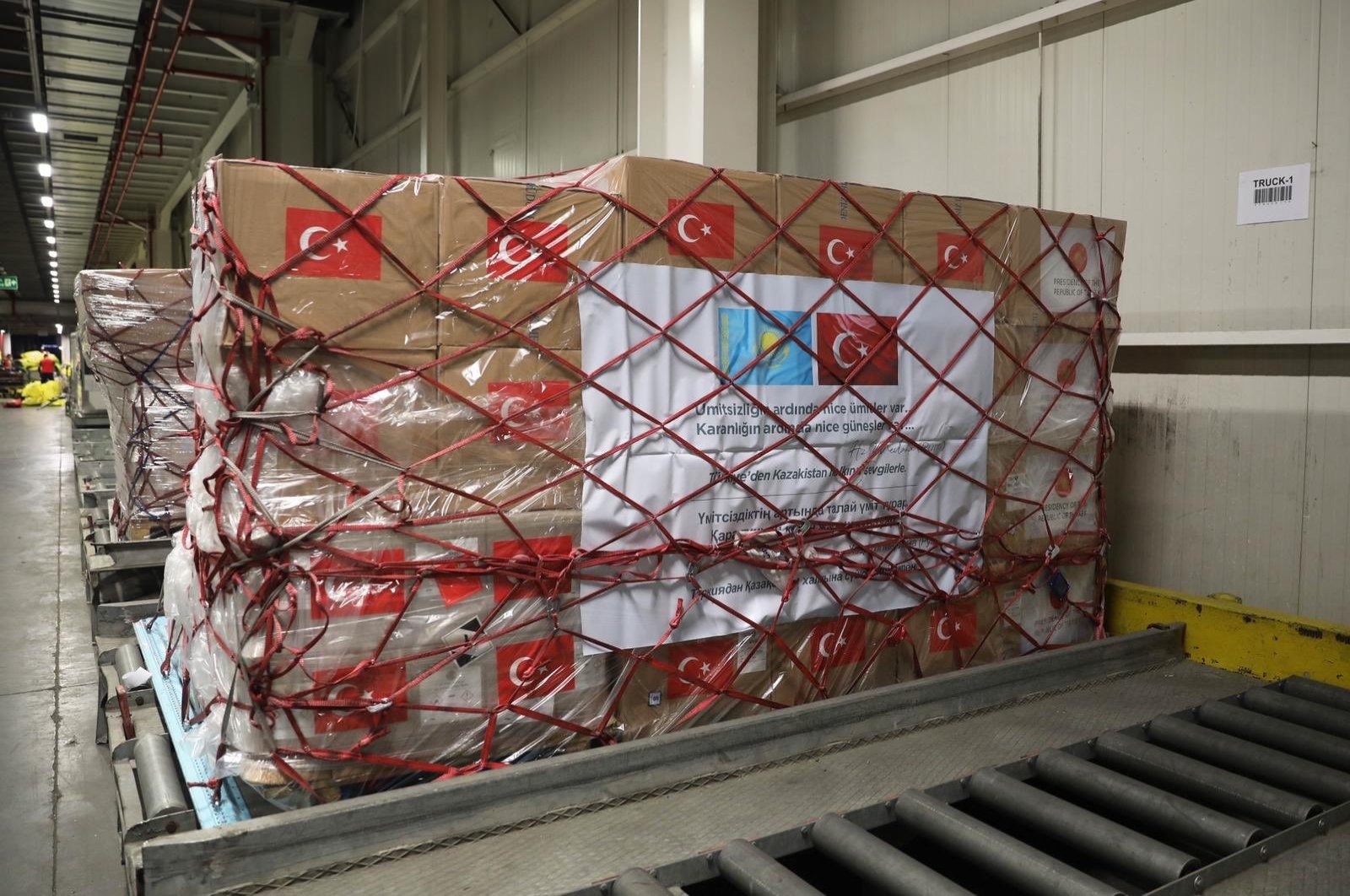 Turkey delivered medical aid equipment to Kazakhstan in order to support the global combat against the novel coronavirus pandemic, May 9, 2020. (İHA Photo)
by DAILY SABAH May 10, 2020 11:47 am

As part of its comprehensive efforts to promote global solidarity against the deadly coronavirus pandemic, Turkey most recently delivered medical aid to Kazakhstan

Turkey on Saturday sent medical aid equipment to Kazakhstan in order to support the country’s combat against the novel coronavirus pandemic.

In a statement released by the Defense Ministry, it said: “Medical aid supplies, prepared at the direction of President Recep Tayyip Erdoğan for use against the COVID-19 outbreak, have been sent to Kazakhstan.”

After originating in China last December, COVID-19 has spread to at least 187 countries and regions across the world. Europe and the United States are currently the worst-hit regions.

The pandemic has killed around 269,600 worldwide, with total infections over 3.84 million, while more than 1.28 million patients have recovered, according to figures compiled by the U.S.-based Johns Hopkins University.

Turkey, a country that has made a name for itself in the last decade with its humanitarian efforts, has already become a prominent figure of this fresh statecraft by sending medical aid packages to many corners of the globe nearly day.

Turkey has a long tradition of sending humanitarian aid to countries facing difficulties, even for those with whom it has tense diplomatic relations. For instance, in 1938, only a decade after the country’s foundation following a bloody war, Turkey sent medicine to China amid the outbreak of cholera in the Far East. Similarly, in 1941, Turkey sent medicine to the Greek army upon their request, a country that fought against Turkey during the liberation war. Similar aid has been provided to many other countries over the years, including to Ethiopia, Bangladesh and Afghanistan.

Turkey and Kazakhstan have taken various actions in recent years to improve bilateral ties. While their current trade volume stands at about $3 billion, the two countries are continuing to work together to increase this figure to $5 billion.

In a meeting in September 2018 between the two nations’ presidents, various agreements were inked between governments, including the "Military Cooperation Agreement" and the "Mutual Protection Agreement for the Classified Information in the Military Field." In addition, the "New Synergy Joint Economic Program 2018-2020 Action Plan" was signed by the foreign ministries of Turkey and Kazakhstan.

Kazakh Ambassador to Ankara Abzal Saparbekuly on February stressed that Turkey's Asia Anew initiative, which aims to bring momentum to ties with the continent's countries, is a significant project for Ankara as technology and innovation begins shifting into Asian nations.

"Turkey is both an Asian and a European country. For us, it is a door opening from Asia to Europe, the Mediterranean and Africa. In the same way, for Turkey, we are the opening to China, Russia and Central Asia," he said.