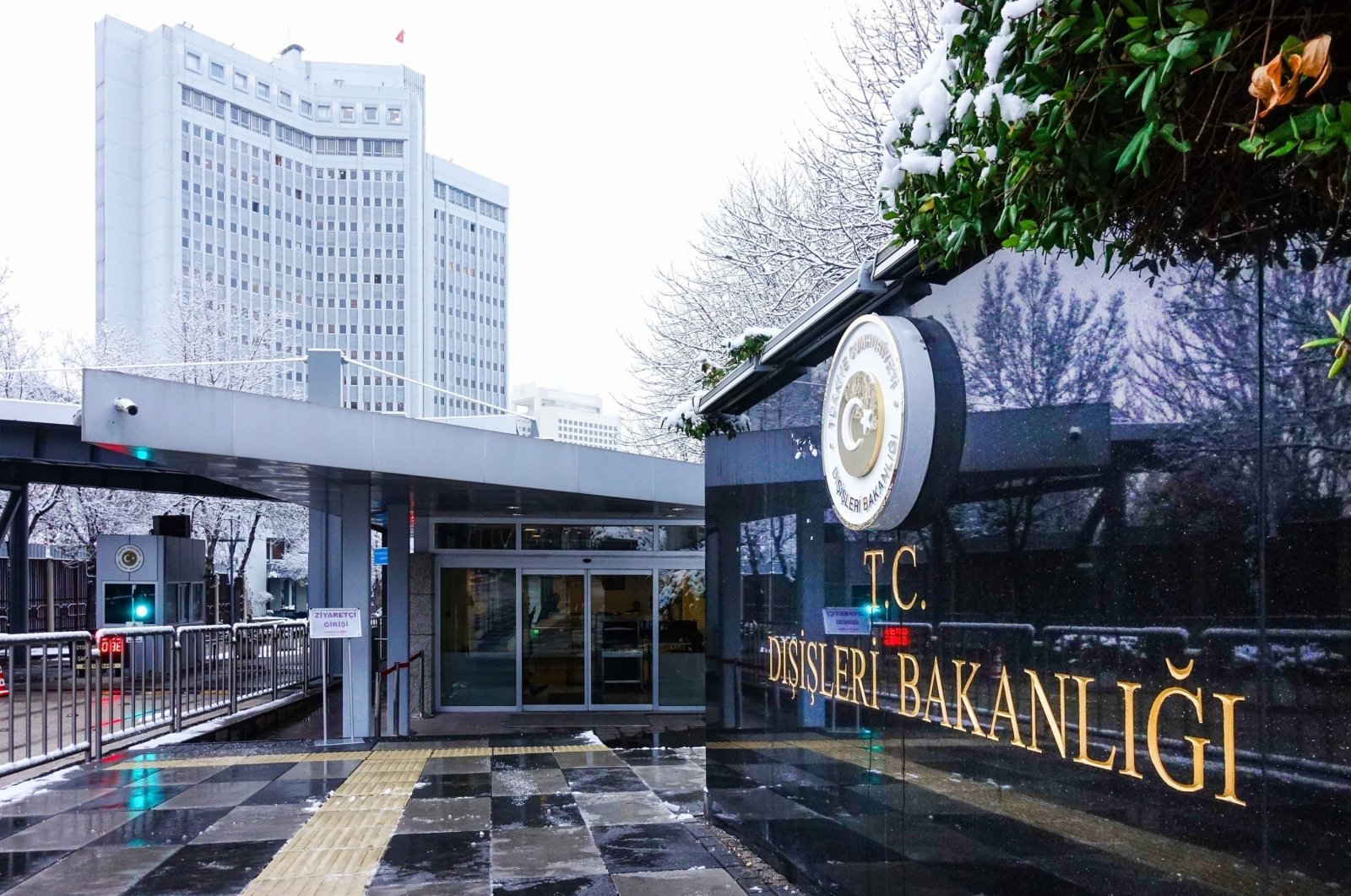 Turkey's Foreign Ministry summoned Tuesday the ambassadors of 10 countries over their joint statement calling for the release of jailed Turkish businessperson Osman Kavala, accusing the countries of meddling in the Turkish judiciary.

Releasing a statement on Tuesday, the ministry said that "a group of ambassadors in Ankara, who issued a joint statement last night, contrary to diplomatic practices, regarding an ongoing case in our country, were summoned to the Ministry of Foreign Affairs this morning."

Ankara also pointed out that the decisions of the European Court of Human Rights (ECtHR) are often ignored and not implemented, saying that focusing only on cases related to Turkey to keep the Kavala case on the agenda at all times is "an insincere and double-standard approach" and that the ambassadors had been warned to "stay within the responsibilities of their duties."

On late Monday, the embassies of the United States, Canada, France, Finland, Denmark, Germany, the Netherlands, New Zealand, Norway and Sweden called for the release of Kavala, who has been imprisoned for four years now over his alleged role in the 2013 Gezi Park protests and subsequent riots.

“Today marks four years since the ongoing detention of Osman Kavala began. The continuing delays in his trial, including by merging different cases and creating new ones after a previous acquittal, cast a shadow over respect for democracy, the rule of law and transparency in the Turkish judiciary system,” the joint statement issued by the embassies said.

“Together, the embassies of Canada, France, Finland, Denmark, Germany, the Netherlands, New Zealand, Norway, Sweden and the United States of America believe a just and speedy resolution to his case must be in line with Turkey’s international obligations and domestic laws,” the countries added.

“Noting the rulings of the European Court of Human Rights (ECtHR) on the matter, we call for Turkey to secure his urgent release," read their statement which was posted on the U.S. Embassy’s Twitter account on Monday.

Turkish officials called on the embassies to respect the “independence of the Turkish courts.”

“Some countries’ ambassadors who are obliged to show loyalty to the independence of the countries they serve in ... have exceeded their limits and demanded that (politicians) interfere with the judiciary,” said Vice President Fuat Oktay.

Turkish Interior Minister Süleyman Soylu hit out at the embassies' statement on Twitter.

"It is not acceptable for ambassadors to make a recommendation or suggestion to the judiciary for an ongoing case," Soylu said.

"Your recommendation and suggestion throw a shadow over your understanding of law and democracy."

Justice Minister Abdülhamit Gül also criticized the statement, saying that "no ambassador had the right to make a recommendation or suggestion to our courts" on Twitter.

"It is this ignorance of limits and boundaries that throws a shadow over the rule of law," Gül added.

“Ambassadors of other countries do not have the right to comment on ‘ongoing cases’ in Turkey when it is forbidden to even discuss or hold meetings about an ongoing trial in Turkish Parliament; this is very clearly stepping out of bounds,” speaker of Turkish Parliament, Mustafa Şentop also said in a tweet.

“Diplomats are bound to have respect to the judiciary of the country they are serving in. According to our Constitution, no ambassador can give advice to our courts or tell them to do anything. What casts a shadow on the rule of law is this presumption,” he said.

"It is an obligation that all diplomatic entities respect our country's sovereignty and the independence of Turkish judiciary, and that they refrain from intervening in our domestic affairs," ruling Justice and Development Party (AK Party) spokesperson Ömer Çelik said in a tweet.

"We are pleased that diplomats on duty in our country are contributing to the ties between our nation and their own states," he added.

"Nevertheless, we reject in the strongest terms their faulty statements concerning our country's sovereignty."

Last month, the 47-member Council of Europe – of which Turkey is a member – said it would start infringement proceedings against Turkey, unless Kavala is released before its next committee of ministers meeting in November. The infringement proceedings could result in punitive measures against Turkey, including its possible suspension from the organization that promotes democracy and human rights.

The ECtHR called for Kavala's release in December 2019, claiming that the detention was aimed to silence him. The United States also previously called for his release in February.

“Turkey is a state of law. No state or any other party can dictate to Turkish courts about legal processes,” the Foreign Ministry said in a written statement.

“The judicial processes regarding Osman Kavala, carried out by independent courts, continue. Everyone has to respect these judicial processes,” it noted, adding that it is the Council of Europe that follows up on the enforcement of the ECtHR decision on Kavala.

“Our government has submitted the necessary information within this framework,” it stated.

The indictment against Kavala and the 15 other defendants accuses the suspects of financing and coordinating the actions and protests in 2013 and claims that they had been involved and directed aspects of an uprising since 2011.

Kavala has maintained his claim that he participated in peaceful activities to defend the environment and the park, which is near his office, and rejected the accusation that he organized and financed the protests.

Following the police response to control the protests, the movement grew with demonstrations and riots taking place across the country against the government of then-Prime Minister Recep Tayyip Erdoğan.