Turkey calls on US to respect country's independent judiciary 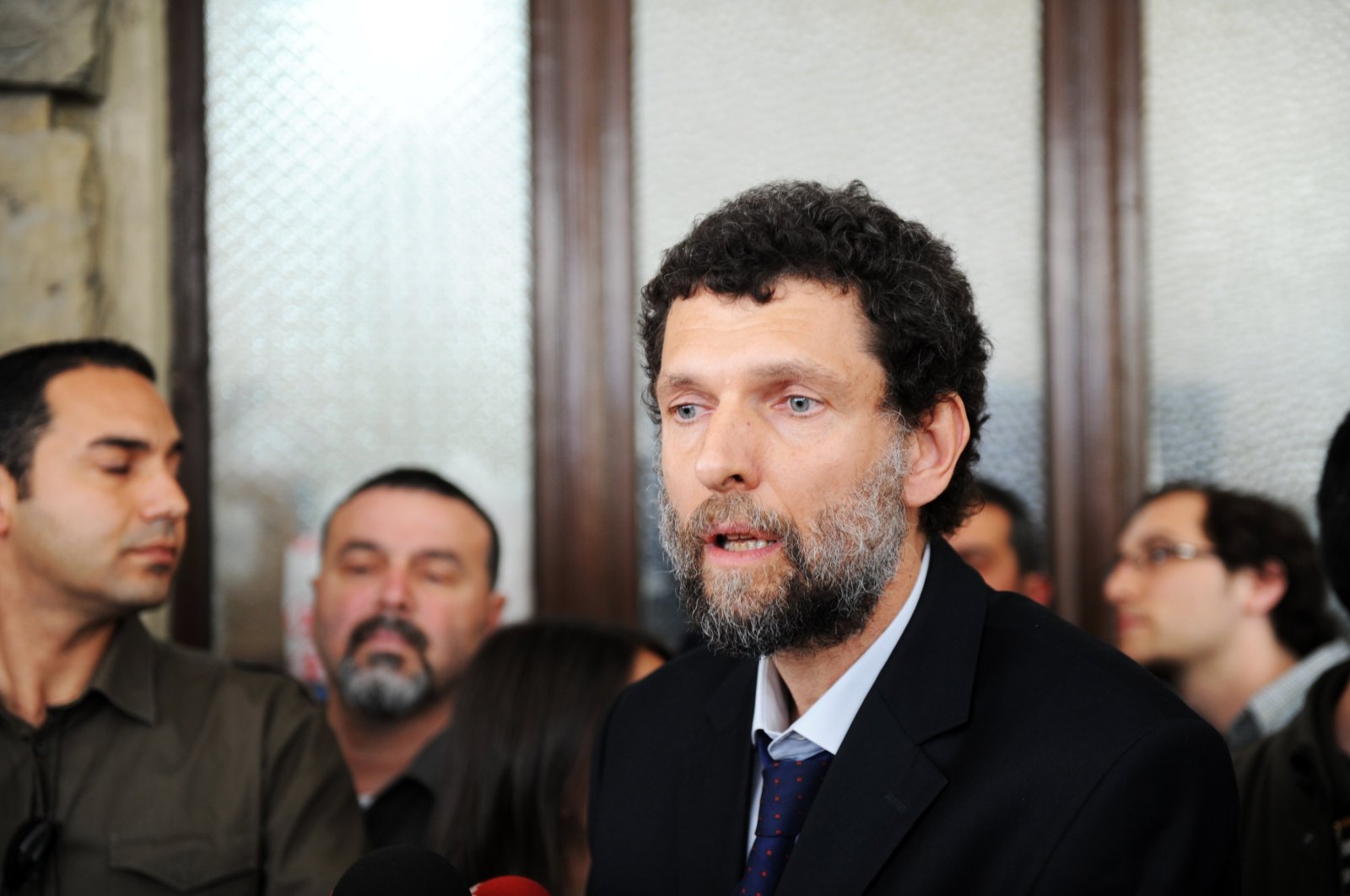 Once again faced with an attempt by the Biden administration to intervene in its domestic policies and judiciary, Ankara urged Washington to respect internal processes

Turkey on Thursday bashed the U.S. for once again trying to intervene in its domestic politics and judicial process following Washington’s statement calling on Ankara to release businessperson Osman Kavala, who was arrested for charges related to the 2016 failed coup and the 2013 Gezi Park protests.

“Turkey is a state of law. No state and no one can dictate to Turkish courts about legal processes,” the Foreign Ministry said in a written statement.

“The judicial processes about Osman Kavala, carried out by independent courts, continue. Everyone has to respect these processes,” it continued, adding that the follow-up of the enforcement of the European Court of Human Rights’ (ECtHR) decision on Kavala is made by the Council of Europe. “Within this framework, our government submits the necessary information.”

The statement also noted that Turkey made the necessary explanation on Kavala to the U.S. on July 28 last year.

Kavala was first arrested on criminal charges related to the 2013 Gezi protests, a small number of demonstrations in Istanbul that later transformed into nationwide protests which left eight protesters and a police officer dead.

The businessperson was later remanded in custody by an Istanbul court as part of a probe into the 2016 defeated coup, with prosecutors accusing him of spying.

"The specious charges against Kavala, his ongoing detention, and the continuing delays in the conclusion of his trial, including through the merger of cases against him, undermine respect for the rule of law and democracy," State Department spokesperson Ned Price said in a statement.

Henri Barkey, an American academic and former adviser to the Central Intelligence Agency (CIA), is also on trial for attempting to overthrow the government. The duo is also being charged with political and military espionage and could face life imprisonment plus additional prison terms.

Barkey was absent from the first hearing which Kavala attended via videolink from the Istanbul prison where he is being held.

Kavala helped establish the Turkish branch of prominent Hungarian-American tycoon George Soros' Open Society Foundation, and his arrest has stirred trouble in Turkey-U.S. relations, in addition to calls for his release from the Turkish opposition. The U.S. State Department's call in July for Kavala's release irked Ankara, which has asked its NATO ally not to interfere in its domestic affairs and respect the rulings of its courts.

Turkey had recently criticized another U.S. attempt to interfere in its domestic issues when Washington released a statement about the ongoing protests over the appointment of a new rector at Istanbul’s Boğaziçi University.

Kavala's wife professor Ayşe Buğra is a prominent historian who also happens to be a leading faculty member in Boğaziçi, a university with a long-running liberal tradition, and was recently on the spotlight following President Recep Tayyip Erdoğan's criticizing her work.

Ankara had a word of advice for those trying to lecture Turkey on democracy and law while not taking into consideration the country's legal approach to the situation, telling them to first "take a look at themselves."

The Turkish Foreign Ministry further underlined that "it is an unprincipled and inconsistent approach to expend efforts to interfere in an ongoing legal process in Turkey" while Washington “continues to make up excuses on the judiciary processes” regarding the extradition of the mastermind behind the July 15 coup attempt, Fetullah Gülen.

Turkey has issued multiple extradition requests to the U.S. for Gülen but they have fallen on deaf ears. Turkey has sent folders full of evidence implicating Gülen in a number of criminal cases in Turkey, but Washington has failed to take steps toward extradition. The first request was sent four days after the 2016 coup attempt and, although the U.S. condemned the treasonous operation that left 251 people dead and nearly 2,200 injured, it was reluctant to deport members of the Gülenist Terror Group (FETÖ) to Turkey.

Ankara is seeking to repair strained ties with Washington, which last year imposed sanctions on Turkey over its purchase of Russian air defense systems, and with the European Union.

Yet, several issues remain to be solved including the extradition of the FETÖ leader, the U.S.’ support for the PKK terrorist organization’s Syrian wing, the YPG, in northern Syria and the S-400 issue.

The U.S. on Wednesday renewed its call to Turkey to get rid of the Russian S-400 air defense system, appearing to reject an offer by Ankara for a compromise.

Addressing reporters in the capital Ankara this week, Defense Minister Hulusi Akar proposed a compromise in which Turkey would not fully deploy the S-400s.

Turkey will open discussions for the "Crete model" regarding the use of the S-400s, Akar said Tuesday.

Akar drew a parallel to Greece, which bought Russia's older S-300 system but did not make it fully operational. U.S. officials downplayed the parallel, saying the S-400 was a more advanced system.

"Our policy vis-a-vis the S-400s has not changed," Price said separately when asked about the Turkish proposal.

"Russian S-400s are incompatible with NATO equipment, they threaten the security of NATO technology and they are inconsistent with Turkey's commitments as a NATO ally," he told reporters.

"We have and continue to urge Turkey not to retain this system," he said.

Ties between NATO allies Turkey and the U.S. were badly strained in 2019 over Ankara’s acquisition of the Russian air defense system, prompting Washington to remove Turkey from its F-35 Lightning II jet program.

The U.S. argued that the system could be used by Russia to covertly obtain classified details on the Lockheed Martin F-35 jets and is incompatible with NATO systems. Turkey, however, insists that the S-400s would not be integrated into NATO systems and would not pose a threat to the alliance.

The Russian-made S-300 system, on the other hand, has been sold to 20 countries, including NATO member countries such as Bulgaria, Greece and Slovakia.

NATO, similarly to the U.S., argues that alternatives to the S-400s should be found. Last October, Secretary-General Jens Stoltenberg reiterated that it is a national decision what kind of defense capabilities different allies acquire. “But at the same time, what matters for NATO is interoperability and the importance of integrating air and missile defense, and that cannot be the case with a Russian system S-400,” he said.

Ankara has repeatedly stressed it was the U.S.' refusal to sell Patriot missile systems to Turkey that led it to seek other sellers, adding that Russia had offered a better deal, including technology transfers. Turkey even proposed setting up a commission with the U.S. to clarify any technical issues.

‘Biden will change tone on Turkey’

On the other hand, Presidential Spokesperson Ibrahim Kalın, aiming to achieve a positive agenda with Washington, stated Tuesday, "we believe that we will have good relations with the Joe Biden administration in the U.S. as long as our relations are based on mutual respect, common interests and the recognition of reciprocal sovereignties."

Indicating that Biden’s negative statements on Turkey were part of his election campaign, Kalın said on CNN International: “He knows Turkey and Turkish politics. These statements were inappropriate; we rejected them. He surely will change tone and flow.”

Kalın was referring to a video clip that went viral last August in which Biden said: "We can support those elements of the Turkish leadership that still exist and get more from them and embolden them to be able to take on and defeat (Recep Tayyip) Erdoğan. Not by a coup, not by a coup, but by the electoral process."

Turkish officials harshly reacted to these words indicating that Biden could support the opposition to topple President Erdoğan in the 2023 elections, labeling them as "ignorant" and failing to recognize the Turkish nation.

Following these remarks, Foreign Minister Mevlüt Çavuşoğlu said that only the Turkish nation, not someone from the U.S. or another country, can decide to change its government and president.

Saying that Biden’s teams are comprised of experienced professionals that know Turkey, Kalın added: “Especially considering the current challenges from Syria to Iraq, from Libya to the Caucasus and to the Gulf countries, I believe that they (Biden’s team) will put Turkey’s strategic importance and value at the center of relations. I believe that they are ready for positive relations with Turkey.”

Kalın noted that Biden visited Turkey four times during his time as vice president and he believes Biden will use this experience as president.