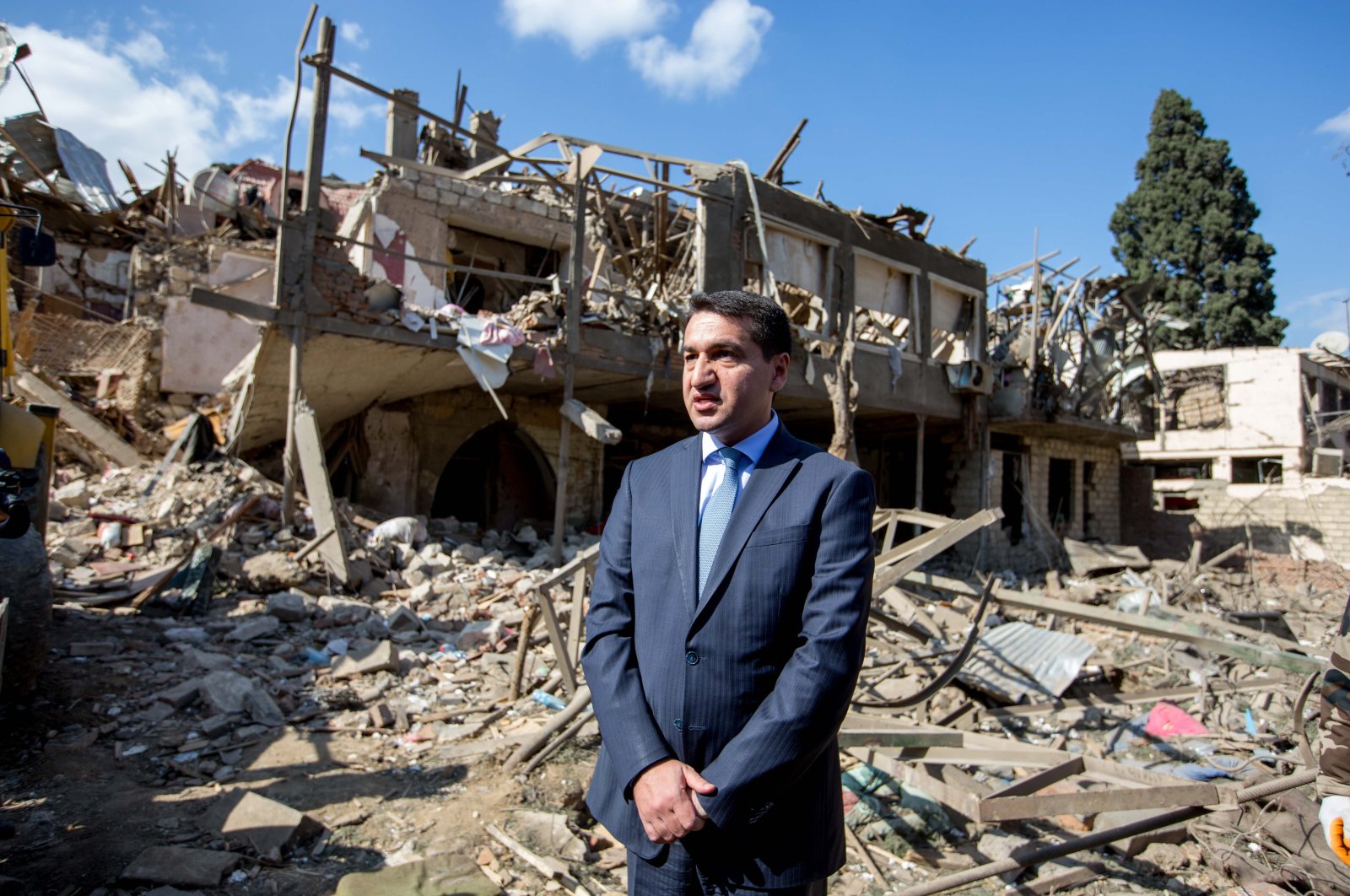 Azerbaijani Presidential aide Hikmet Hajiyev stands in front of a building destroyed in Armenian shelling in the city of Ganja, Azerbaijan on Oct. 13, 2020. (Sabah Photo)
by Hilal Kaplan
Oct 26, 2020 9:51 am

Turkey’s presence at the negotiating table to solve the Nagorno-Karabakh crisis is critical for Azerbaijan, Baku’s presidential aide Hikmet Hajiyev said, as he highlighted the solidarity between the two countries and Turkey’s contributions to regional peace.

“Azerbaijan has been insisting on Turkey’s participation at the table, as (Ilham) Aliyev and (Recep Tayyip) Erdoğan had previously noted and Ankara is now at the negotiating table,” Hajiyev said. He noted that Ankara’s involvement is crucial because it values Azerbaijan’s security and territorial integrity as much as it values its own.

“Turkey is also a country that contributes to peace and justice not just here but in other regions as well,” Hajiyev said, adding that this was one of the reasons why Azerbaijan has been insisting on Turkish involvement.

He highlighted that Turkey was the first country to support Azerbaijan’s independence and has played a significant role in strengthening its sovereignty.

“Our loyalty as ‘one nation, two states’ will continue as we share a common ethnic background, religion, language and civilization,” Hajiyev said, adding that Azerbaijan is “shoulder-to-shoulder with Turkey on all issues, including Nagorno-Karabakh, Cyprus and the Eastern Mediterranean.

The top presidential aide said they hope that the Armenian occupation ends so the Azerbaijanis, who have been yearning for 30 years to return to their homeland, can finally do so once peace is established.

“I also wish peace for the Armenian people. We have no problems with the Armenian people, and we’re ready to create the same opportunities for Armenians living in Nagorno-Karabakh,” Hajiyev said, adding that those people have also been suffering as a result of the occupation. He continued by noting that Armenia would also benefit from establishing neighborly relations with Turkey and Azerbaijan, rather than its policies based on “fabricated histories.”

Noting that he was born in the city of Ganja, which has been one of the main targets of the Armenian military during the recent flare-up, Hajiyev said the Armenian attacks will not scare the people of the city.

Hajiyev also thanked Turkish media outlets for raising their voice on behalf of Azerbaijan in the face of Armenian black propaganda.

Hajiyev said Azerbaijan had been sharing information about the presence of PKK terrorists and Armenia’s contact with the terrorist group.

“They established a corridor to bring the PKK into Azerbaijan’s occupied territories,” Hajiyev said, adding that there are also PKK camps in the area, while the tactics used by Armenia indicate a PKK presence.

“Forming tunnels in the region, digging ditches and the firing systems are all unique to the PKK. Azerbaijan has determined PKK presence in the front rows of Armenian fronts with regards to their movement, tactics and differences of appearance,” Hajiyev said.

He added that according to the latest intelligence from captured Armenian officers, some 200 PKK terrorists would cross into Nagorno-Karabakh from Armenia.

Hajiyev noted that all countries that do not see the PKK as a terrorist organization contribute to crimes against humanity.

Criticizing the infectivity of the Minsk Trio – which was set up in 1992 by the Organization for Security and Co-operation in Europe (OSCE) – consisting of the U.S., Russia and France, for failing to take any concrete action against Armenian occupation for three decades, Hajiyev said the Azerbaijani people who were forced to flee their homes were unable to return.

“Azerbaijan is always ready for diplomatic negotiations,” he said but added that Armenia has violated all cease-fire attempts.

Shortly after the interview was published on Monday, Armenia violated the third cease-fire attempt five minutes after it went into effect at 8 a.m.

Hajiyev said the Minsk Group, formed to mediate the conflict was biased, and that Turkey, which he described as a global power due to its involvement in Syria, Libya and other international conflicts, must be involved in the solution process.

"Turkey is also a member of the Minsk Group, why shouldn't it be among the co-chairs? Even if many Western countries do not want to accept it, Turkey's word is big, it's fully independent," he said.

The Nagorno-Karabakh region has seen heavy fighting over recent weeks, which has claimed the lives of 600 people, including civilians. The region is considered by the United Nations and international law to be part of Azerbaijan.

The clashes began on Sept. 27 when Armenian forces targeted civilian Azerbaijani settlements and military positions in the region, leading to casualties. World powers, including Russia, France and the United States, have called for a new cease-fire. Turkey, meanwhile, has supported Baku's right to self-defense and demanded the withdrawal of Armenia's occupying forces.