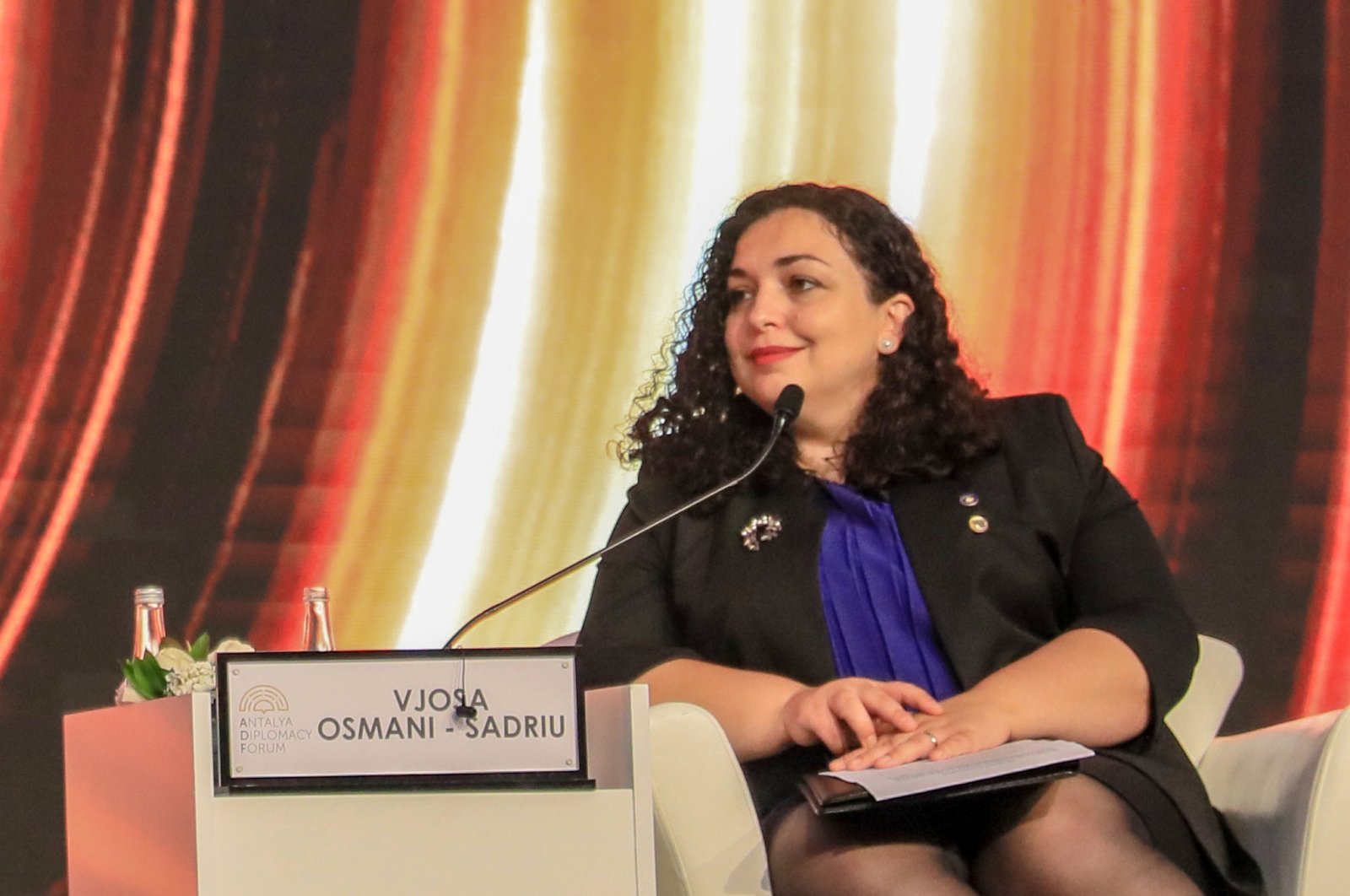 Kosovo's president underlined that Turkey's continued support is crucial for her country to gain recognition and membership in international organizations.

Speaking to Anadolu Agency (AA) on the sidelines of the three-day Antalya Diplomacy Forum that wrapped up Sunday, Vjosa Osmani-Sadriu said, "We will continue to need Turkey's support in gaining more recognition and will continue to need their support for membership to international organizations."

"We will be in touch with Turkish institutions to make sure that every single effort that we make internationally is one that gains the strong support of Turkey, not just their vote but also to have their voice to lobby in favor of Kosovo's recognition and membership," she said.

"Because that is extremely important not just for our prosperity and development, but for longstanding peace and stability in the region as such," she added.

The relations between Kosovo and Turkey have been strong due to a vibrant Turkish population in Kosovo and a Kosovar community in Turkey. These communities should continue to be a bridge between the two nations, Osmani-Sadriu said.

In her meeting with Turkish President Recep Tayyip Erdoğan, Osmani-Sadriu said the two leaders discussed many areas of cooperation from trade to health to defense.

She said Kosovo is a great place to invest with its young population "that speaks lots of languages (and is) very much tech-savvy."

The president noted that 80% of Kosovo's production in the IT sector is exported to the U.S., "which shows what great quality it is."

Osmani-Sadriu said she held very fruitful meetings on the sidelines of the Antalya Diplomacy Forum, adding that the process of Kosovo's recognition as an independent state "is a path that is facing quite a lot of challenges and hurdles, because of Serbia and Russia's efforts to stop this process."

"But let me point out that Kosovo's independence is an irreversible process. There is nothing that can stop our way forward for more recognitions and more memberships, sometimes it may take us longer, but we're still moving forward," she added.

The president said Kosovo is now recognized by over 100 countries around the world and they continue efforts to raise this figure.

"Because the International Court of Justice has confirmed that Kosovo's independence is in line with international law, there's practically no reason whatsoever for any country to hesitate to recognize Kosovo," she added.

"The dialogue is about two neighbors living side by side, removing barriers in trade, talking about the missing persons from the war and talking about other issues that are to the benefit of the two peoples that we represent on an equal footing as two sovereign states. We will never ever accept Kosovo's independence to be on that table, neither its borders," she said, adding that revisiting these issues will only destabilize the entire region.

She said the path to European integration will gain pace after it is recognized by more countries.