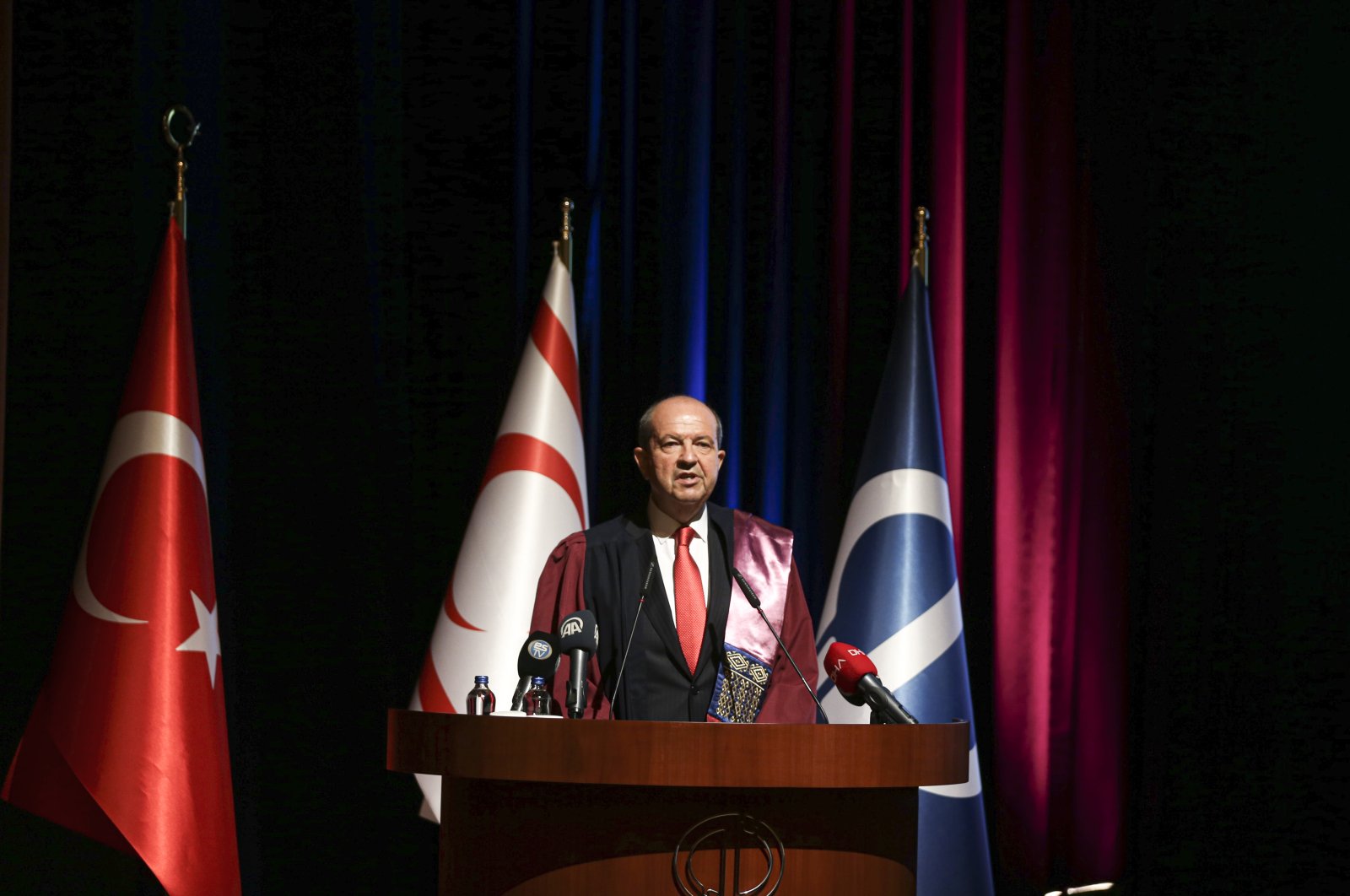 Turkish Cypriot President Ersin Tatar speaks at the opening lecture of the semester on the history of the Turkish presence on the island at Anadolu University, Eskişehir, Turkey, Monday, Oct. 4, 2021. (AA Photo)
by DAILY SABAH WITH AA
Oct 05, 2021 8:18 am

Tatar delivered the opening lecture of the semester on the history of the Turkish presence on the island at Anadolu University in the central Turkish province of Eskişehir, where he was also bestowed an honorary doctorate.

While describing the history of the Turkish Cypriots’ “struggle for existence” on the island, Tatar underlined that their right to national sovereignty is just as valid as that of the Greek Cypriots.

He argued that there have been efforts to turn Cyprus into a Greek island for years.

“We wanted to exist, to live on this island together. We always accepted that they (Greek Cypriots) are also valuable but, unfortunately, we did not receive the same understanding from them,” said Tatar.

Adding that "games" were played for a federal-based outcome on the island, he said: “So, they’re saying that once there is a federal-based agreement, the Turkish Cypriots will be equal, according to them, but I don’t think there would be any equality as they don’t even accept a rotating presidency (between Turkish and Greek Cypriots).

“Therefore, the federal-based agreement will basically make us a minority in a short time, later annihilating us and with Turkey’s withdrawal from the island (leave us with) zero soldiers, zero guarantors,” he warned.

Tatar said the TRNC is “face to face with such a mentality, a selfishness, an audacity that would take us back to before 1974 and even 1960,” referring to an era in which ethnic attacks against Turkish Cypriots were carried out.

“So, it isn’t possible for us to say ‘yes’ to such a thing (federal-based agreement),” he stressed, arguing that efforts to get Turkey to leave the region were part of a “set-up” to turn it into a “Greek lake.”

Turkish Cypriot officials have noted that a two-state solution is the only way forward for permanent peace on the island as there is no common ground between the two nations.

Turkey also underlined on Monday that it would continue defending its rights, as well as those of the TRNC.

"We defend our rights and the rights of the Turkish Cypriots all the way. We'll also do what's necessary when there's action that will harm these rights," Foreign Minister Mevlüt Çavuşoğlu said at a joint press conference with his Polish counterpart Zbigniew Rau in Poland's capital Warsaw.

Underlining that Turkey supports the establishment of a mechanism to equitably share the wealth around the island, Çavuşoğlu said he hoped Poland's President Andrzej Duda would "listen to both sides" there and give "friendly advice" during an upcoming visit.

He stressed that the reason for the current tensions in the Eastern Mediterranean region was the maximalist postures of Greece and the Greek Cypriot administration, adding that Turkey always prioritizes diplomacy.

"Recently, unfortunately, there have been some provocative actions from Greece and the Greek Cypriot side. Their ships are trying to enter our continental shelf," Çavuşoğlu said, adding that Turkey was taking the necessary steps in the face of this.

He also noted Ankara's proposal for a regional conference to bring countries of the Mediterranean region together, though he said the EU is yet to respond.

It has seen an on-and-off peace process in recent years, including a failed 2017 initiative in Switzerland under the auspices of guarantor countries Turkey, Greece, and the U.K. The Greek Cypriot administration entered the European Union in 2004, the same year that Greek Cypriots thwarted the U.N.’s Annan plan to end the decadeslong dispute.

Diplomats last April had tried to make headway to end the decades-old conflict between rival Greek and Turkish Cypriots that destabilizes the Eastern Mediterranean and is a key source of tension between NATO allies Greece and Turkey. The gathering, dubbed the U.N.+5, was attended by the foreign ministers of Cyprus’ three guarantors – Greece, Turkey and Britain. However, U.N. Secretary-General Antonio Guterres said that there is "no common ground yet" to resume formal negotiations on the settlement of the Cyprus problem.