Turkish Cyprus’ rights in Eastern Mediterranean must be protected: Tatar 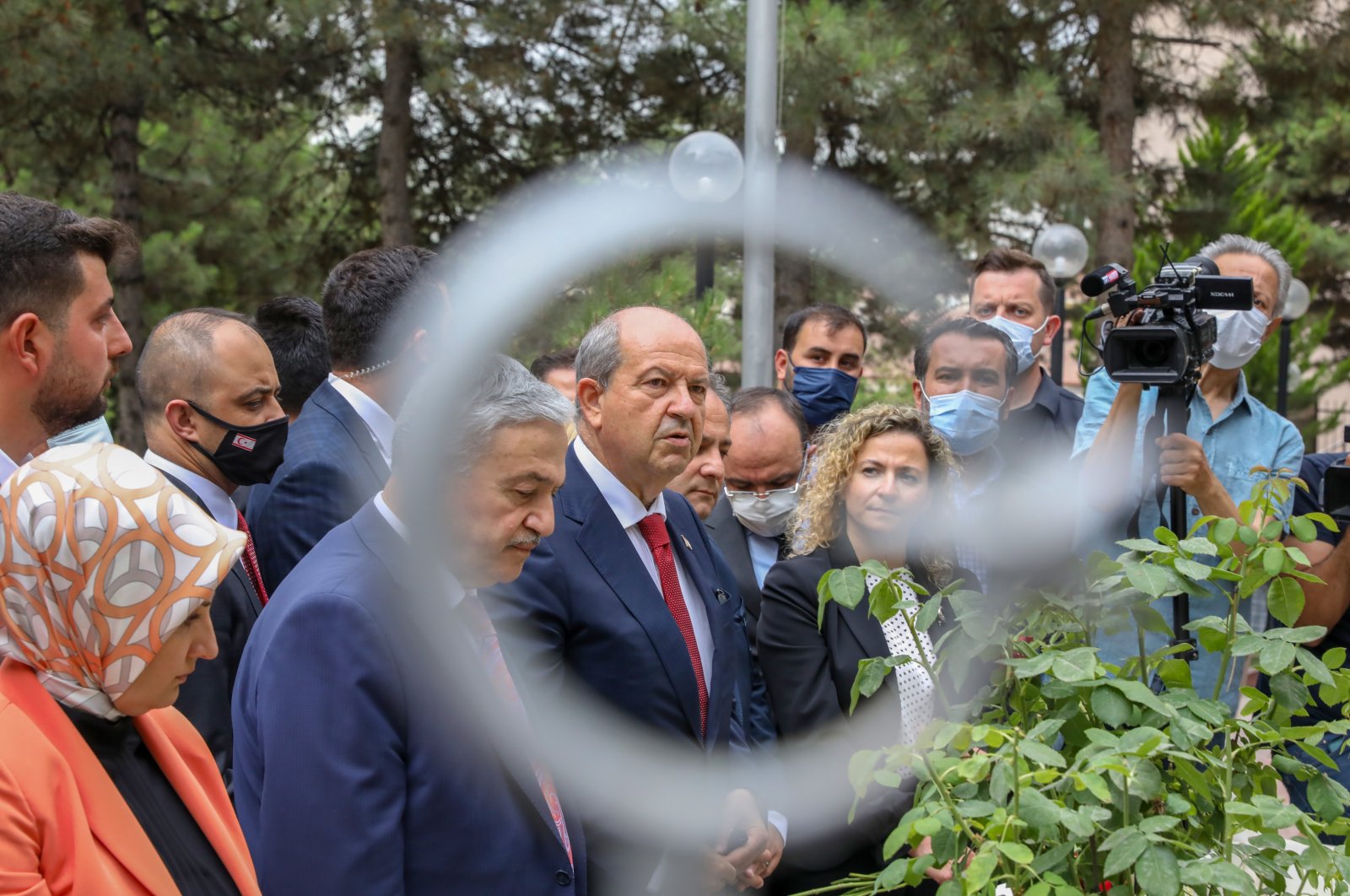 Turkish Republic of Northern Cyprus (TRNC) President Ersin Tatar is in Elazığ province to make an official visit and visit the tomb of martyrs killed by Greek Cypriot gangs in 1963, July 4, 2021 (AA Photo)
by DAILY SABAH Jul 05, 2021 11:33 am
RECOMMENDED

The rights of the Turkish Republic of Northern Cyprus (TRNC) in the Eastern Mediterranean must be protected, TRNC President Ersin Tatar stated on Sunday.

Hailing relations with Turkey during his visit to Elazığ, he said: “Cyprus has undergone big incidents, a big genocide had taken place, yet with the support of Turkey, here we are. We have a state, we have a republic.”

Tatar added that the TRNC and Turkey continue to defend their rights in harmony.

Reiterating the goal of having two equal states on the island, Tatar said, “An agreement to decrease tensions between Turkey and Greece in order for balances to be created in the Eastern Mediterranean would benefit everyone.”

Tatar touched upon the importance of developments, the changing conjuncture in terms of energy resources and the strategic significance of the Eastern Mediterranean. “In every regard, we are strengthening in the region. Therefore, we will not be deceived.”

Remembering Turkish Cypriots who lost their lives during the "Bloody Christmas" massacre in 1963, Tatar visited their tombs in Elazığ.

Tatar mentioned Nihat Ilhan, a medical commander who was serving in Cyprus at that time during the Bloody Christmas incident. Tatar said that Ilhan's son had visited him during his time as prime minister.

“The Turkish people must never forget the incidents that happened in Cyprus because everything had been done for Cyprus to become a Greek island. Yet, with Turkey’s support, we resisted there. And we continue to resist,” Tatar added.

While the Turkish Cypriots were discriminated against and alienated by the Greek Cypriots in state institutions, systematic and comprehensive attacks began on Dec. 21, 1963, when a bloody incident, later termed as "Bloody Christmas," took place.

A total of 103 Turkish Cypriot villages were attacked, leading to hundreds of deaths. The bloody campaign also displaced 30,000 Turkish Cypriots, who had to take shelter in an area constituting merely 3% of the island.

In 1967, a military junta ousted the government in Greece and started to destabilize the island. The junta struck two villages on the island of Cyprus – Boğaziçi (Agios Sergios) and Geçitkale (Lefkoniko), both located in the Gazimağosa (Famagusta) district.

He said that the TRNC is preparing to celebrate the 47th anniversary of the Cyprus Peace Operation of July 20, 1974. “July 20, 1974, is the most significant date of the Turkish people in terms of independence and freedom, but before that there were big terrorist incidents in Cyprus in 1963.”

The Eastern Mediterranean, with Cyprus as a key actor, has been one of the main issues of dispute between Turkey, the EU and Greek Cypriots last year.

Speaking on the EU and the Greek Cypriot’s aim to create a federation for the island, Tatar said “Cyprus as a whole being admitted to the European Union under a federal roof, would mean that our ties with Turkey are being cut. We will never allow our ties with Turkey to be broken off.”

“We want a political agreement according to justice, equality and Cyprus’ realities.”