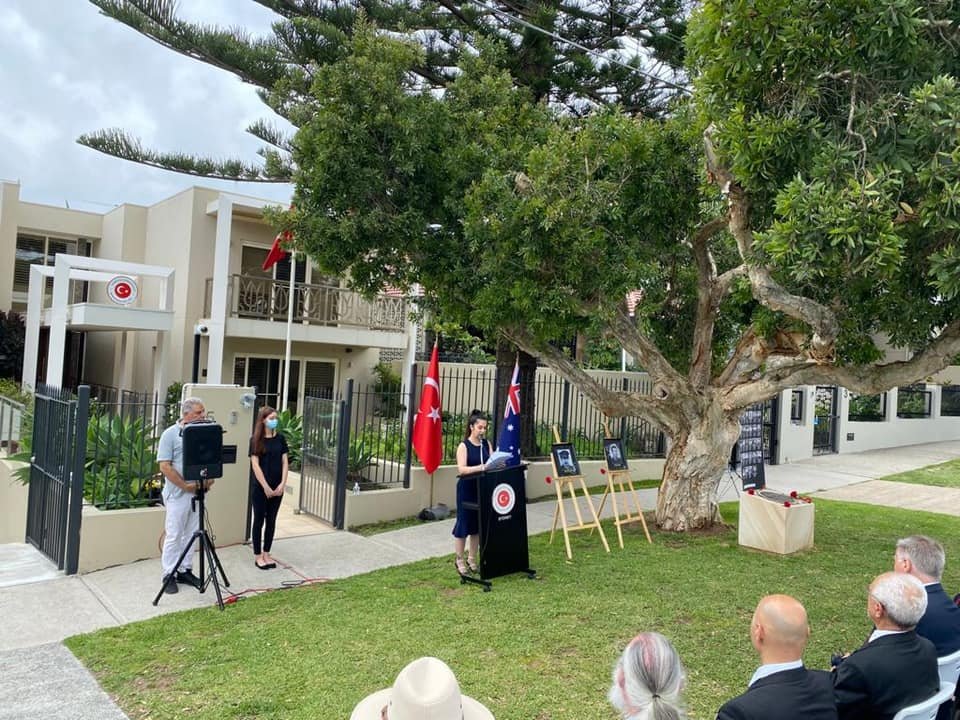 A speech is given to guests at the remembrance ceremony held in front of the Turkish Consul General's residence in Sydney, Australia, Dec. 17, 2021. (AA Photo)
by Anadolu Agency Dec 17, 2021 7:02 pm
RECOMMENDED

A remembrance ceremony was held in Sydney, Australia on Friday commemorating two Turkish diplomats murdered by Armenian terrorists 41 years ago.

The ceremony in memory of Consul General to Sydney Şarık Arıyak and Security Attache Engin Sever was attended by members of parliament from the ruling and opposition parties, foreign mission chiefs, representatives of various faiths, and consulate staffers.

In a letter to the ceremony, Şarık Arıyak's daughter Çağla voiced her gratitude for the annual ceremonies commemorating her father and Sever, and thanked the Australian police for working to find the terrorists behind the attack.

"I felt like my father is still alive. Thank you once again for gathering there. I present my most cordial regards to each of you," she said.

In 2019 the Australian police said there had been new developments in its investigation of the attack, adding that information leading to the diplomats' murderers were eligible for a reward of AU$1 million (nearly $716,000).

On the morning of Dec. 17, 1980, while the diplomats were leaving an official residence to go to work, two Armenian terrorists targeted Arıyak and Sever in front of Arıyak's wife Demet and daughter Çağla.

Over the decades, Armenian terrorist groups, including JCAG, the Armenian Secret Army for the Liberation of Armenia (ASALA), and the Armenian Revolutionary Army (ARA), carried out many assassinations of Turkish diplomats and their families around the world.

According to data compiled by Anadolu Agency (AA), a total of 77 people – 58 of them Turkish nationals, including 31 diplomats and members of their families – lost their lives in attacks carried out by these terrorist groups from 1973 to 1986.

The terror campaign started in 1973 when Turkey's Consul General in Los Angeles Mehmet Baydar and diplomat Bahadır Demir were assassinated in an attack by a terrorist named Gourgen Yanikian.

ASALA was the first Armenian terrorist group to launch a campaign against Turkey. It targeted not only Turkey but also other countries, and became infamous for a 1975 bomb attack on the Beirut office of the World Council of Churches.

The JCAG initially gained notoriety after claiming responsibility with ASALA for the Oct. 22, 1975 attack on Danış Tunalıgil, Turkey's ambassador in Vienna.

The ARA is considered a continuation of the JCAG under a different name.