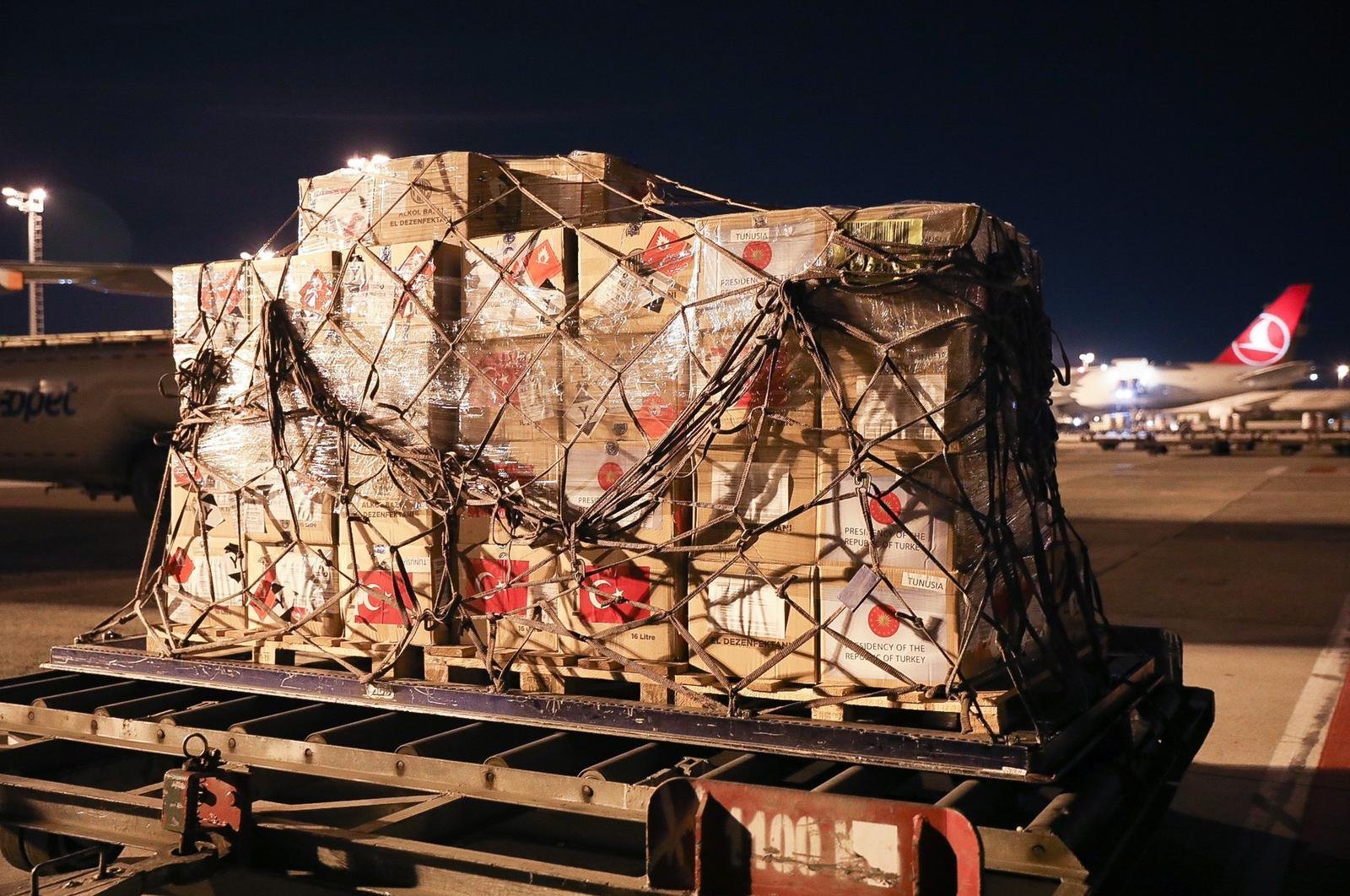 Ankara continues to heal the wounds of the needy by providing medical aid to countries that have been hit hardest by the coronavirus pandemic.

The latest delivery of medical aid was provided to Tunisia on Friday.

"Medical aid supplies, prepared at the direction of President Recep Tayyip Erdoğan for use against the COVID-19 outbreak, have been sent to Tunisia," Turkey's Defense Ministry said on Twitter.

"Along with the medical supplies, a letter from President Recep Tayyip Erdoğan was also delivered to the officials to be submitted to the President of Tunisia Kais Saied," the ministry also added.

After originating in China last December, COVID-19 has spread to at least 187 countries and regions across the world. Europe and the United States are currently the worst-hit regions.

The pandemic has killed around 269,600 worldwide, with total infections over 3.84 million, while more than 1.28 million patients have recovered, according to figures compiled by the U.S.' Johns Hopkins University.

Some two-thirds of the world have requested medical supplies from Turkey to fight the coronavirus, and nearly half of these requests were met, Turkey's foreign minister said Wednesday.

A total of 128 countries have requested medical supplies from Turkey in the form of grants, export permits or purchases, Foreign Minister Mevlüt Çavuşoğlu said in a televised interview.

Underlining that nearly 64 countries have received medical supplies from Turkey, Çavuşoğlu said he recently spoke to Health Minister Fahrettin Koca on how to meet Paraguay's request for medical supplies.

The huge number of medical supply requests from around the world "shows that Turkey is a reliable source and a true friend," Çavuşoğlu added.

"Always standing by our friend&ally #Lithuania. Will overcome this challenge together," Çavuşoğlu tweeted upon the delivery.

Meanwhile, Azerbaijan's envoy to Ankara expressed gratitude for Turkey on Friday, stating that the two countries have been "brothers" during the pandemic.

Speaking to Anadolu Agency (AA), Hazar İbrahim pointed to the solidarity between Ankara and Baku during this process and added that the two countries will be the ones to survive this struggle successfully.

İbrahim also reminded of the medical equipment that Azerbaijan received from Turkey and said that he expresses his "profound thanks" to Erdoğan and the foreign and health ministries of Turkey.

"In troubled times, a person knows the others better. In these times, the states know each other better. I believe that in the period of COVID-19, when there were many troubles and sufferings, we realized how valuable the Turkish-Azeri brotherhood is," the envoy highlighted.

Turkey has a long tradition of sending humanitarian aid to countries facing difficulties, even for those with whom it has tense diplomatic relations. For instance, in 1938, only a decade after the country’s foundation following a bloody war, Turkey sent medicine to China amid the outbreak of cholera in the Far East. Similarly, in 1941, Turkey sent medicine to the Greek army upon the request of Greece, a country that fought against Turkey during the liberation war. Similar aid has been provided to many other countries over the years, including to Ethiopia, Bangladesh and Afghanistan.