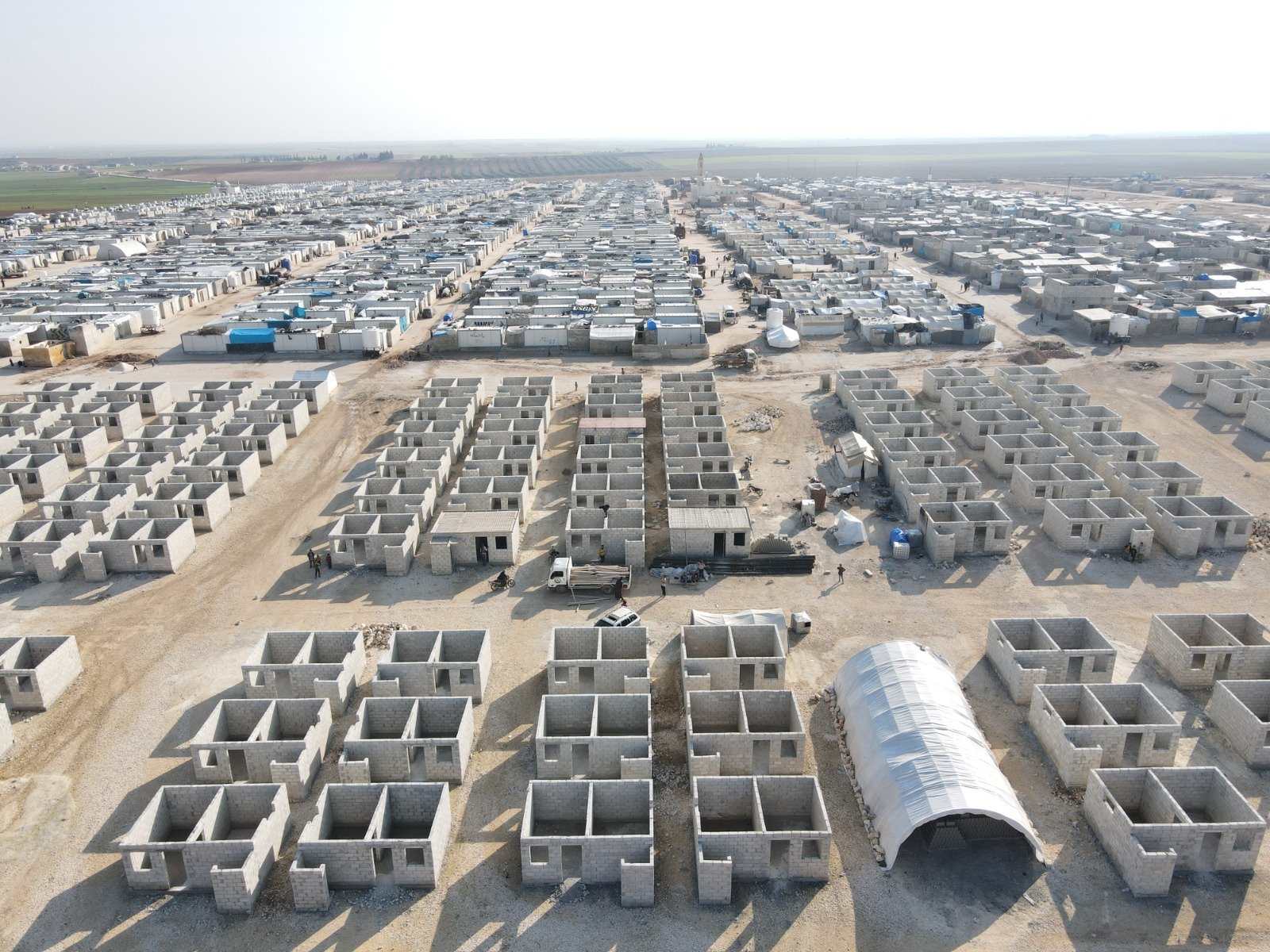 Three-hundred briquette houses in the new town are expected to be completed by the end of this month in northern Syria's Azaz, March 1, 2021. (AA Photo)
by DAILY SABAH WITH AA Mar 01, 2021 2:01 pm
RECOMMENDED

A Turkish charity organization has sponsored the construction of a town in northwestern Syria's Azaz. The construction of 300 briquette homes with a capacity of hosting 1,300 people in the town is expected to be completed by the end of this month, and 700 more houses have been added to the project.

In Turkey's southeastern province of Gaziantep, volunteers associated with the Humanitarian Relief Foundation (IHH) launched a donation drive to construct a town to house Syrians who are currently living in sub-human conditions in refugee camps.

Charitable people from Gaziantep made generous donations for the construction of 300 briquette homes and parks for residents.

Speaking to Anadolu Agency (AA), Murat Şahin, provincial director of the IHH, thanked the people for their generosity, adding that they will construct 700 more houses in Azaz and 250 others in Jarabulus, a Syrian city on the western bank of the Euphrates.

"These new towns will be named after Gaziantep to show our gratitude to the generosity of the people of this province," he added.

The IHH has been carrying out efforts to provide Syrians with food, health care, shelter and education since the start of the Syrian civil war in 2011.

Euphrates Shield was the first in a series of operations by Turkey and the Syrian National Army (SNA), against different terrorist groups including the YPG, the PKK's branch in northern Syria, and Daesh. Since then, Turkey has launched three more successful counterterrorism operations – Olive Branch (2018), Peace Spring (2019) and Spring Shield (2020) – across its border in northern Syria to prevent the formation of a terror corridor and enable peaceful settlement of locals.

Since the operations, Turkey has supported every aspect of life across the region, ranging from health to education, security to agriculture. In this respect, efforts to clear bombs and improvised explosive devices (IEDs) were launched, and administrative duties were designated to local councils. The country also rolled up its sleeves to reconstruct hospitals, schools, mosques and roads destroyed by the terrorist groups. Within the scope of ameliorating the region's social infrastructure, people were given food and clothing by several nongovernmental organizations (NGOs), while roads and buildings were rebuilt. These efforts paid off as hundreds of displaced Syrians started to return to the liberated areas.