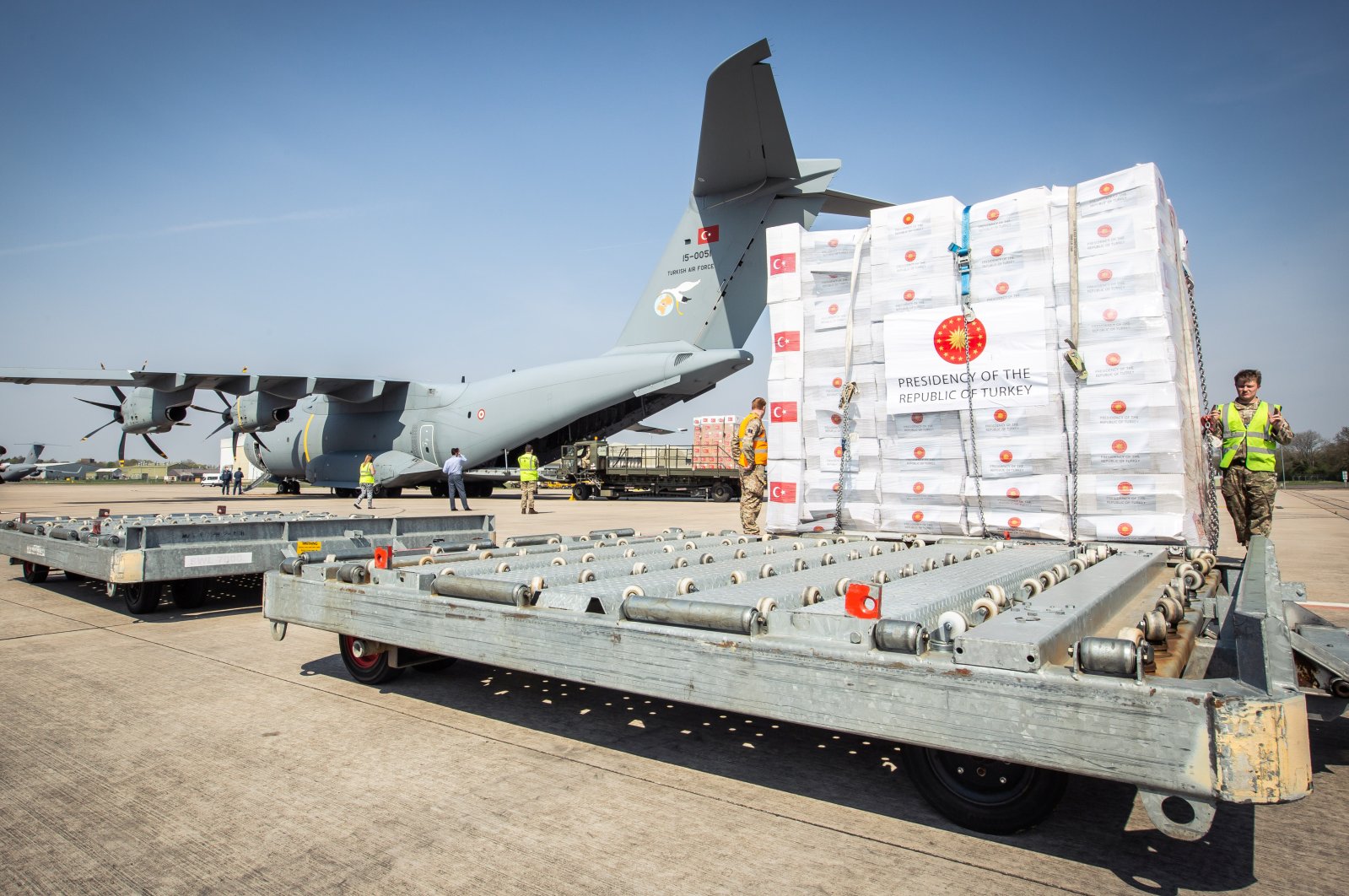 Crucial supplies of personal protective equipment for medical staff are delivered from Turkey to a Royal Air Force base for distribution around the country amid the coronavirus outbreak, Carterton, Britain, April 10, 2020. (Reuters Photo)
by DAILY SABAH WITH AA Apr 12, 2020 9:38 am
Edited By Yasemin Nicola Sakay
RECOMMENDED

British officials thanked Turkey for sending medical supplies to the United Kingdom, as the country is grappling with the coronavirus pandemic.

In a statement posted on Twitter Saturday, the Royal Air Force thanked Turkey after receiving the shipment.

“Thank you to Turkey, valued friend and ally, for such a vital contribution in the fight against coronavirus,” the message said.

The British ambassador to Turkey, Sir Dominick Chilcott, published a video message on Twitter Saturday, thanking Turkey for its support.

“I present my heartfelt thanks to our ally and friend Turkey for its generous present. We will all beat coronavirus with such examples of international cooperation,” the ambassador said. Sir Chilcott also praised Turkey’s leadership in the coronavirus fight around the world, as it is voluntarily sending aid and necessary medical supplies to countries in need.

The ambassador also said the delivery of supplies comes at a difficult time and will save the lives of COVID-19 patients.

Wendy Morton, British member of Parliament and parliamentary under-secretary of state for the European neighborhood, thanked Turkey on Saturday for medical supplies sent to the U.K – one of the countries worst hit by the coronavirus.

"I want to express thanks to Turkish Foreign Minister Mevlüt Çavuşoğlu and Health Minister Fahrettin Koca for 250,000 items of PPE for the NHS – 14 tons of which delivered to Royal Air Force Brize Norton yesterday. This generous gift demonstrates strength of friendship between Turkey and the U.K," she said on Twitter.

The delivery of the aid was covered extensively in the foreign press, and Turkey received thanks from British Twitter users.

"They did the same thing for Ireland in 1845 in the days of Great Famine. Well done Turkey," said a user on the platform, referring to the Ottoman Empire's aid to Ireland.

Health workers have complained about the lack of medical equipment in the U.K. and criticized the government as 19 health officials have died because of COVID-19.

"I'm sorry if people feel that there have been failings," Home Secretary Priti Patel said at the daily Downing Street coronavirus briefing.

Health Minister Matt Hancock emphasized the dire need for medical supplies, saying the equipment should be considered "valuable" and used only for clinical needs.

Turkey sent masks, N95 masks and protective suits Friday, accompanied by a message to residents in the U.K: "After hopelessness, there is much hope and after darkness, there is the much brighter sun. Rumi."

Turkey also sent medical aid to Serbia, Bosnia-Herzegovina, Montenegro, North Macedonia and Kosovo on Wednesday, as well as to Italy and Spain.

The pandemic has killed more than 108,100 and infected more than 1.76 million, while more than 401,300 patients have recovered, according to figures compiled by U.S.-based Johns Hopkins University.