'UN peacekeepers need consent of all sides to succeed in Cyprus' 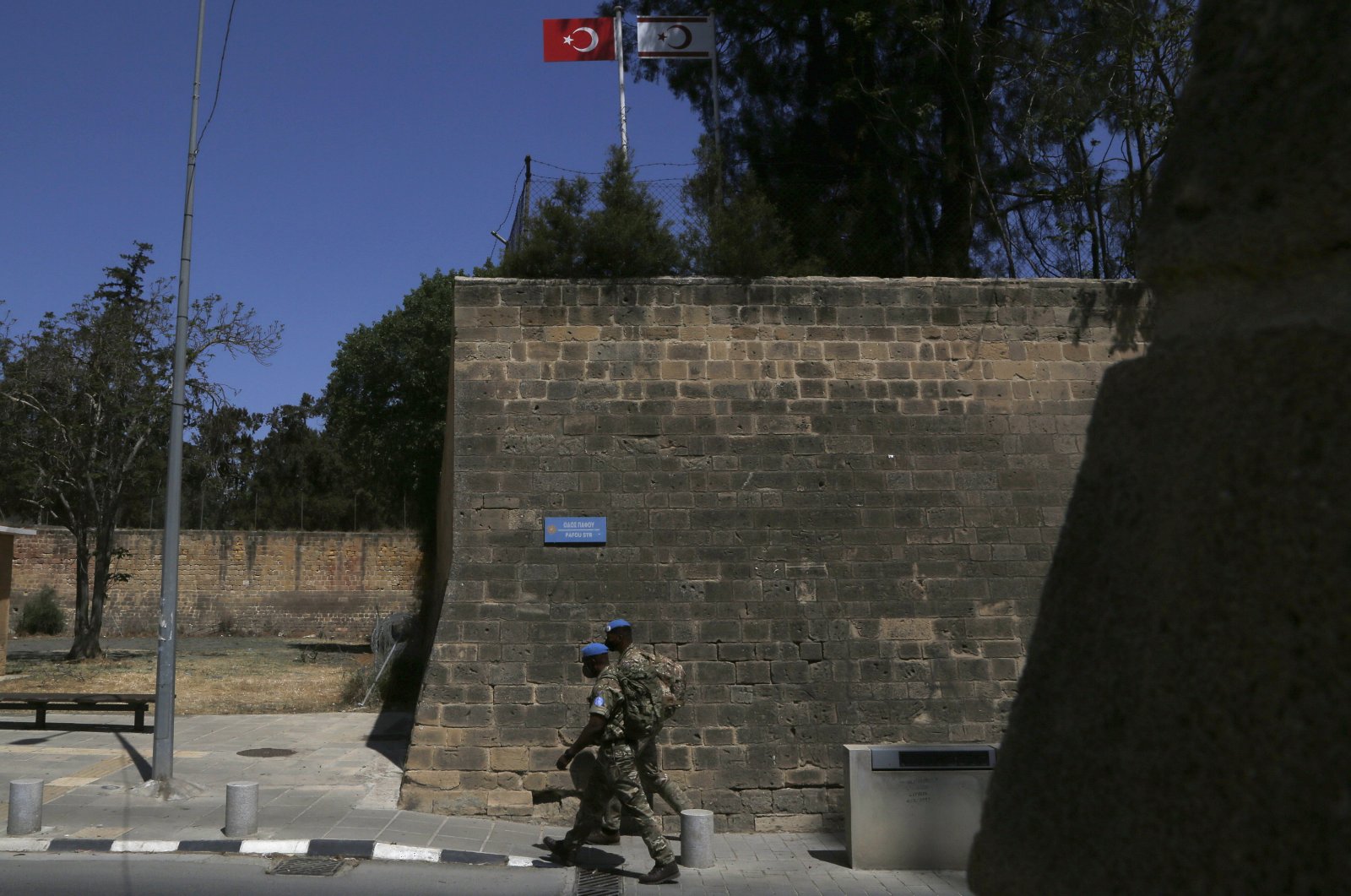 U.N peacekeepers walk by the Venice wall at the medieval core across the U.N buffer zone, in the divided capital Lefkoşa (Nicosia), Cyprus, April 26, 2021. (AP File Photo)
by DAILY SABAH WITH AA Dec 09, 2021 8:44 am
RECOMMENDED

The success of United Nations peacekeepers on the divided island of Cyprus depends on the consent of all sides, Foreign Minister Mevlüt Çavuşoğlu said Wednesday.

“Let me underline the need for the U.N. to seek the consent of the Turkish Cypriot authorities for the U.N. peacekeeping force on the island,” known as UNFICYP, said Çavuşoğlu, in an address to the U.N. Peacekeeping Ministerial meeting held in the South Korean capital Seoul, via video link.

“Furthermore, it should be recalled that the only occupation on the island took place in 1963, which in fact led to the deployment of U.N. peace force in 1964,” he added, referring to ethnic violence by ethnic Greeks on the island that forced Turkish Cypriots to withdraw into enclaves for their safety.

In July, the Turkish Republic of Northern Cyprus (TRNC) complained that it was not asked if it consents to the presence of U.N. peacekeeping forces on the island as the body extended the mission.

The TRNC Foreign Ministry said that TRNC authorities had not been asked if they consent to the UNFICYP's presence and activities on the island.

"This situation is even against the rules and principles of the U.N. It is necessary to reiterate that UNFICYP is only able to carry out its operations on our territory due to the goodwill and constructive stance of our authorities," the statement said.

Turkey also said that the U.N. Security Council’s extension of the mandate of the U.N. Peacekeeping Force on Cyprus has “no meaning or value for us” as it “ignores once again the will of the Turkish Cypriot people.”

“It is against the U.N.‘s own rules and principles that the (Turkish Cypriot) authorities’ consent was not obtained for the extension of the mandate,” said a Foreign Ministry statement, adding that Turkey expects “the U.N. to rectify this situation ... as soon as possible.”

In 1974, a Greek Cypriot coup aimed at Greece’s annexation led to Turkey’s military intervention as a guarantor power to protect Turkish Cypriots from persecution and violence. As a result, the TRNC was founded in 1983.

Çavuşoğlu also said joint efforts to enhance the capabilities of peacekeeping operations should continue and added: “Performance and accountability are two key areas that we should work on to make these operations more effective.”

“We need to encourage accountability with a victim-centered approach,” he added.

Çavuşoğlu said that there is a long way to go, despite the significant progress that has been made reforming the U.N. peacekeeping architecture since the launch of the Action for Peacekeeping (A4P) in 2018.

“The international community has yet to implement the Report of the Panel on United Nations Peace Operations, also known as the Brahimi Report,” he said.

Çavuşoğlu said that Turkey has contributed $2.9 million to the U.N. Peacebuilding Fund and that this support will continue.

Turkey will continue to contribute “to peacekeeping operations around the globe, from Africa to the Middle East and Balkans,” Çavuşoğlu said.

Çavuşoğlu also reiterated Turkey’s commitments: “Five staff officers to be deployed on demand to the headquarters of the MINUSMA (U.N. Multidimensional Integrated Stabilization Mission in Mali, Africa); one transport aircraft to be deployed on demand, either at MINUSMA or MINUSCA (U.N. Multidimensional Integrated Stabilization Mission in the Central African Republic); training for U.N. personnel at Centers of Excellence in Turkey, such as the Partnership for Peace Center; and maritime security training for U.N. personnel.”