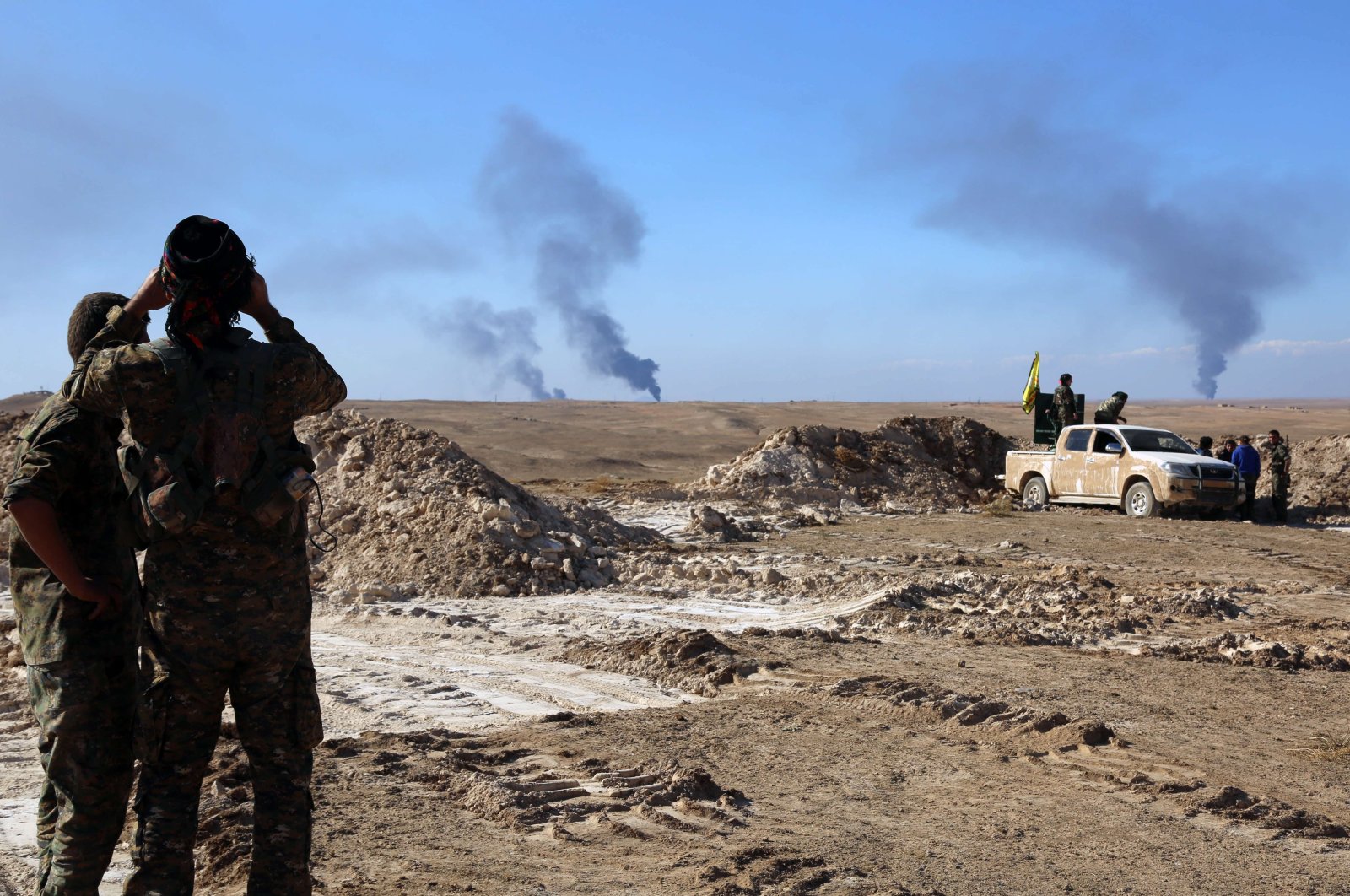 A group of coalition forces including YPG/PKK terrorists monitors smoke billowing in the background, in al-Hol in Hassakeh province, Syria, Nov. 2, 2015. (AFP Photo)
by Daily Sabah with AP Oct 16, 2020 10:54 am
RECOMMENDED

The PKK terrorist group’s Syrian branch, the YPG, on Thursday released hundreds of Daesh terrorists who had been imprisoned in northern Syria, as part of a general amnesty in the region controlled by the U.S.-backed YPG terrorists.

Amina Omar, the head of the so-called Syrian National Council, told reporters in the town of Qamishli that Daesh members who were released have “no blood on their hands" and have all repented to joining Daesh at some point.

“They are people who can be reformed,” Omar said shortly before the men were freed.

The 631 detainees had been held on terrorism charges and were the first batch released in an amnesty deal announced recently following calls from Arab tribes in eastern Syria. Another 253 detainees will have their terms cut in half.

The deal could boost laborious cooperation between the YPG terrorists and the Arab tribes that purvey a significant proportion in the military alliance controlling the area.

The YPG currently operates more than two dozen detention facilities scattered across northeastern Syria, holding about 10,000 Daesh terrorists. Among the detainees are about 2,000 foreigners whose home countries have refused to repatriate them, including about 800 Europeans.

Ankara has long objected to the support of NATO ally U.S. for the YPG, a group that poses a threat to Turkey and terrorizes local people, destroying their homes and forcing them to flee. Under the pretext of fighting Daesh, the U.S. has supported the YPG terrorist group by providing military training and weapons. While underlining that one cannot support a terrorist group in the fight against another, Turkey has continued its own counterterrorism operations, over the course of which it has managed to remove a significant number of terrorists from the region.

The Daesh terrorist group – which at the height of its power in 2014 controlled a third of both Iraq and Syria – lost its last sliver of land last year when the U.S.-backed YPG forces captured the eastern Syrian village of Baghouz.

Since then, the terrorists have gone underground, carrying out hit-and-run attacks, mostly targeting Syrian regime forces and the YPG terrorists.

Earlier this month, the YPG said it will allow Syrian citizens to leave a sprawling camp that houses tens of thousands of women and children, many of them linked to Daesh.

Most of the detainees at al-Hol camp are Syrian and Iraqi women and children. Another highly secured tent settlement that is part of the camp is known as the Annex and is home to some 10,000 hard-line Daesh supporters from other countries.

The overpopulated camp is home to a total of 65,000 people. Crime rates have been high inside the camp and some of the women have tried to escape. Dozens of families have left the camp in recent weeks.