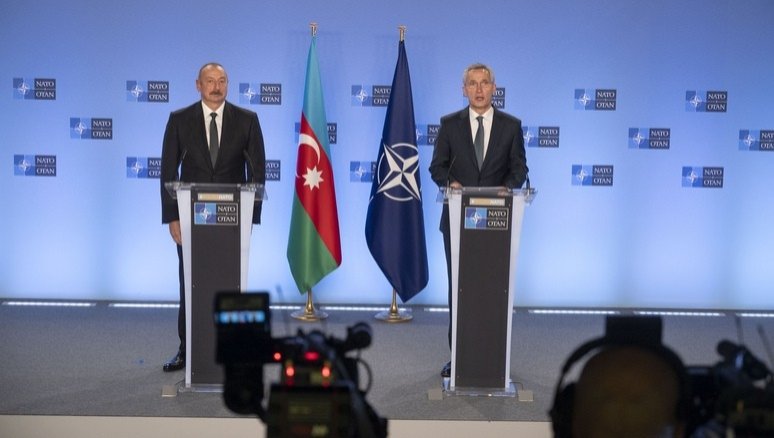 The same legal framework that governs the Lachin corridor between Armenia and Nagorno-Karabakh should be applied to the Zangezur land corridor connecting Azerbaijan with its autonomous exclave of Nakhchivan, Azerbaijan's President Ilham Aliyev said Tuesday.

Once part of Azerbaijan's territory, Zangezur was later assigned by the Soviet Union to the Armenian Soviet Socialist Republic in the 1920s. It is now set to be the site of a new passageway between Azerbaijan and Nakhchivan in the wake of last year's conflict in the Nagorno-Karabakh region.

Azerbaijan now plans to build various projects through the Zangezur corridor, including motorways and rail lines.

Aliyev stressed that a customs framework should be implemented either in both corridors or neither of them, leaving the decision to Yerevan as Baku is prepared to accept either option.

Aliyev underlined that there was now "really a big opportunity" for the region to integrate via transportation links, adding the Zangezur corridor was not only a means of access between Azerbaijan and Nakhchivan but also an opportunity for Armenia to gain a rail link to Iran via the autonomous Azerbaijani region as well as with Russia through Azerbaijan.

"It will really create a special positive atmosphere in the region and a win-win situation for everyone," he said.

In line with Article 3 of the trilateral declaration signed in November 2020 by Aliyev, Armenian Prime Minister Nikol Pashinian and Russian President Vladimir Putin that ended the conflict in Nagorno-Karabakh, Russian elements were deployed in the Armenian-populated areas of Nagorno-Karabakh and in the Lachin corridor. A total of 1,960 lightly armed Russian soldiers and 90 armored personnel have been sent to the region since then.

Based on the declaration, Aliyev said it is "a kind of obligation" for Armenia to provide all the necessary facilities, "though it was not easy during this one year to move forward."

"It is a matter of future discussions," he added.

Aliyev also noted that Azerbaijan proved to be a "reliable partner" to NATO.

Recalling that Azerbaijan under NATO aided in Afghanistan in a peacekeeping capacity from 2002 until the end of August 2021, Aliyev said he had a chance to discuss with Stoltenberg the future plans to cooperate with NATO.

"Azerbaijan participates in NATO's military training. At the same time, with one of NATO's active and leading members, Turkey, we had seven joint military trainings only this year. And this, actually, is serving the cause of peace and stability in the region," he said.

"Azerbaijan is committed to peace, to stability, and predictability, and our efforts are aimed at the minimization of risk of any new war in the region. For that purpose is to open communications, to establish active dialog and to learn to be neighbors again," he added.

Noting that Azerbaijan's policies are "very open and straightforward," Aliyev said: "I hope that if there is goodwill from the Armenian side, we can start, as we proposed, working on a peace agreement between the two countries and to put an end to hostility."

Aliyev also emphasized that today, Azerbaijan is a "reliable supplier" of natural gas to four NATO members, noting that the number may grow in the coming years.

"It is also important for regional stability and security, because energy security is already a part of the national security of the countries."

Aliyev stressed that he and Stoltenberg agreed to continue to combine efforts with NATO for the benefit of the region and global security.

Relations between the former Soviet republics of Azerbaijan and Armenia have been tense since 1991, when the Armenian military occupied Nagorno-Karabakh, a territory internationally recognized as part of Azerbaijan, and seven adjacent regions.

Azerbaijan then launched a counteroffensive operation, later dubbed "Iron Fist," which led to the 44-day conflict ending with the liberation of several cities and over 300 settlements and villages.

The conflict ended on Nov. 10, 2020, in a Russia-brokered deal that saw Armenia cede swathes of territory it had occupied for decades.

A joint Turkish-Russian observation center was established to monitor the truce. Russian peacekeeping troops have also been deployed in the region.

Before the second Karabakh War, also known as the Patriotic War, about 20% of Azerbaijan's territory had been under illegal occupation for nearly 30 years.

Aliyev hailed the agreement as a victory for his country and a defeat of Armenia, saying Baku's military success enabled it to gain an upper hand to end three decades of occupation of its territory.

Meanwhile, Pashinian said he had signed an "unspeakably painful" deal that allowed Azerbaijan to claim control over regions it took back in the fighting.

In January, the leaders of Russia, Azerbaijan and Armenia signed a pact to develop economic ties and infrastructure to benefit the entire Caucasus region. It also included the establishment of a trilateral working group on Karabakh.

The development of a cooperation platform in the 3+3 format, which Turkey's President Recep Tayyip Erdoğan raised in November 2020, recently arose on the agenda as a means of tackling security issues and unblocking economic and transport ties in the region. The 3+3 format for the region comprises of three Caucasian states – Armenia, Azerbaijan and Georgia – alongside three neighboring states – Russia, Turkey and Iran.

Last month, Aliyev and Pashinian met with Putin in Sochi, Russia. Following the meeting, the leaders of Azerbaijan and Armenia expressed their readiness to start the process of demarcation and delimitation of their contested border.

Aliyev said Baku is ready to start the process of border delimitation without delay and suggested work on a new peace treaty between Armenia and Azerbaijan "to put an end to the confrontation, recognize each other's territorial integrity, sovereignty and live in the future as neighbors."